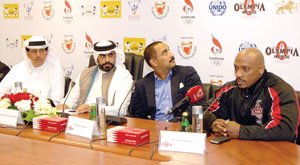 A large prize purse of $100,000 will be shared amongst the winners in the third IFBB Amateur Mr Olympia and the Bahrain National Day Weightlifting and Bodybuilding Championship.

This was announced last night in a Press conference held at the Shaikh Khalifa Sports City arena in Isa Town, where details of both competitions were revealed.

The Amateur Mr Olympia will be held from December 5 to 7 at the same arena. It will be preceded by the National Day competition on December 4 and 5.

Both events are to take place under the patronage of Supreme Council for Youth and Sports chairman and Bahrain Olympic Committee (BOC) president Shaikh Nasser bin Hamad Al Khalifa.

The top three finishers in each of the weight classes from both competitions will take home a share of the prize fund.

The events are being organised by the BWBF in cooperation with the International Federation of Bodybuilding and Fitness (IFBB), the AFBF, the Supreme Council for Youth and Sports, the BOC, Fit Gym and Spa, Tamkeen, the United Nations Industrial Development Organisation (UNIDO) and Prince Events Management.

On the sidelines of the two competitions, Shaikh Abdulla said an exhibition of various supplements and health products will be held. This is being done in partnership with Tamkeen and UNIDO.

The weekend’s headlining act will be the third edition of Mr Olympia, which is set to feature more than 110 amateur bodybuilders from 16 countries around the world.

Registration for the National Day competition is still open and those wishing to participate are advised to contact the BWBF.