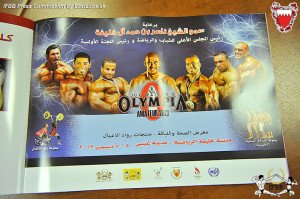 Thursday was the first day of the 2013 Amateur Mr. Olympia in Manama, Bahrain. But it was rather a prelude to what will be tomorrow, during the semifinals. All IFBB distinguished officials, judges and competitors have already arrived to Manama and have been accommodated at the official Amateur Olympia hotel – Kempinski Grand & Ixir Hotel Bahrain City Center.

First half of the day was spent on the sightseeing tour around the city, then the IFBB and Organizing Committee officials visited the Amateur Olympia EXPO. It is an important part of the Amateur Olympia weekend as this fitness EXPO, organized in cooperation with the United Nations Industrial Development Organization (UNIDO) is the first event of this type in Bahrain. The beginnings are impressive and promising. Maybe this idea will develop towards organization of the annual big fitness industry expo for the whole Gulf region? Something like FIBO in Germany or Arnold Classic Europe in Spain.

I think that it is a right time to do it. Not only competitive but also recreational bodybuilding has become popular there, the values of healthy lifestyle is in accordance with modern Arab people’s habits and expectations, also from the religious point of view. Modern, big, luxury gyms and fitness centers are open almost each month, more and more people are seriously working out and the market is growing. Good moment for domestic and foreign manufacturers to enter the market with their offers.

And in the evening the weigh-in was held at the hotel. Most of athletes are in a perfect body conditions, so we can expect tough battle in the semifinals.

More photos and videos can be seen at www.ifbb.com or eastlabs.sk