This weekend the 2013 Tijuana Pro show will be taking place. 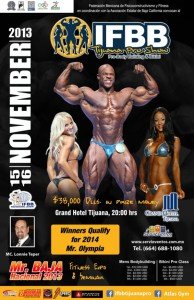 This should be a very easy victory for Dexter Jackson. Taking nothing away from the other competitors, Dexter is still a cut above the rest.

This competition could have been promoted better, even though it is taking place in Mexico.