Czech bodybuilder Tomáš Kašpar will be one of the home competitors at EVLS Prague Pro 2014. The brand new Pro card holder will be competing in Open category. He won the Pro card in 2013 thanks to an overall victory at the Ben Weider Diamond Cup and EVLS Prague Pro will be the first contest among professionals for him. “I’m so glad that I can enjoy my Pro debut in my home country,” says Kašpar.

He is doing bodybuilding since he was seventeen years old. “Before, I did a variety of sports from ice hockey, football, karate to athletics. But when I grabbed a dumbbell in my hand, I immediately knew that this is my sport. Bodybuilding became a lifestyle for me and completely filled my life,” says Kašpar, who considers overall victory and the Pro card at last year’s Ben Weider Diamond Cup and second place at the 2013 Arnold Classic Amateur as his largest achievements.

He sees the goals before his professional debut realistically. “It would not be me if I didn´t dream about a place in top 10 despite big names on the list of competitors. Top 10 will be a very good result for me. I will come very well prepared, bigger than ever before and in excellent form. I’d started with a weight of around 125 kg. I look forward to the home audience and fans, I want to invite then to come, watch and support me in the fight against the biggest professional stars,” invites Kaspar fans to Tipsport arena. 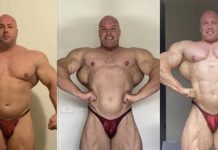