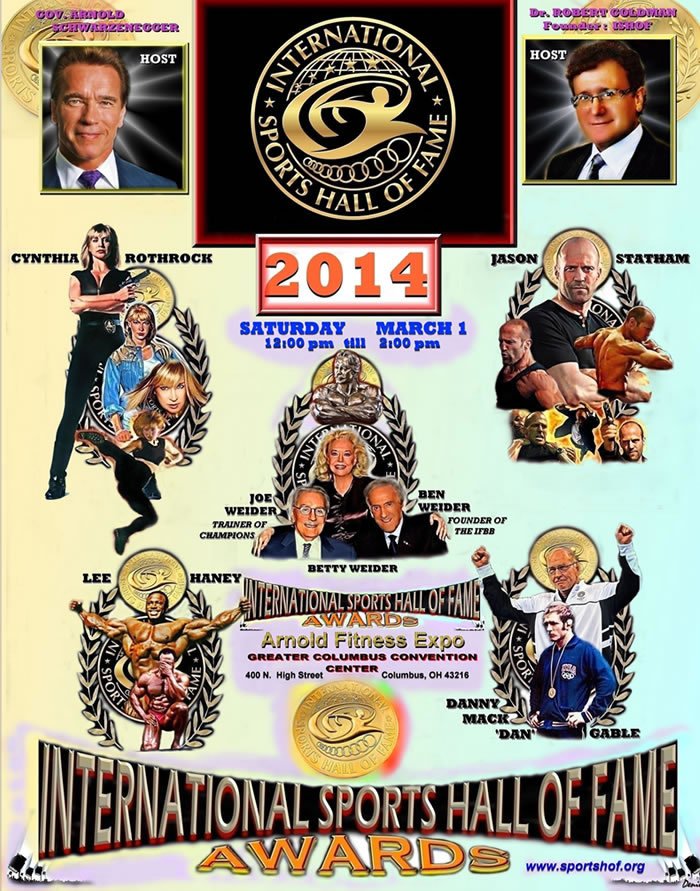 The International Sports Hall of Fame Induction Ceremonies for 2014 Co-Hosted by Gov Arnold Schwarzenegger at the Arnold Sports Festival weekend with over 175,000 in attendance was a fantastic success. Over 100 members of the international press covered the event.

Jason Statham
JASON STATHAM, an international star best known for his hard-hitting action films, most recently starred in HUMMINGBIRD, Steven Knight’s (EASTERN PROMISES’ screenwriter) directorial debut and produced by Paul Webster. Before HUMMINGBIRD, Statham could be seen in PARKER (based on Donald Westlake’s novel) opposite Jennifer Lopez, and reprised his role as Lee Christmas in THE EXPENDABLES 2. Statham surprised fans by appearing at the end of FAST & FURIOUS 6, building anticipation for him joining Vin Diesel and Dawyne “The Rock” Johnson in the next installment of this massive film franchise.
Born in Sydenham, England, Statham became a member of the British national diving team as one of their top divers, eventually placing 12th in the world. While training at the famed Crystal Palace National Sport Center in London, film crews and photographers pursued him as new talent. He eventually met director Guy Ritchie who cast Statham in his film debut as Bacon in LOCK, STOCK AND TWO SMOKING BARRELS (1998).

Cynthia Rothrock
Rothrock is five-time World Karate Champion in forms and weapons between 1981 and 1985. These categories are not combat-oriented, being displays of fluidity of movement rather than fighting, and are therefore not segregated into male and female categories but fully open to both sexes.
She holds six Black belts in various Far Eastern martial disciplines, including Tang Soo Do (also “tangsudo”, Korean), Tae Kwon Do (Korean), Eagle Claw (Chinese), Wu Shu (contemporary Chinese), Northern Shaolin (classical Chinese), and Pai Lum Tao Kung Fu (contemporary Chinese). She received her 6th degree black belt in Tang Soo Do Moo Duk Kwan in 2006. She was tested by Grand Master Robert Kovaleski, 7th Dan and chair of the I.T.M.A., and was promoted to 7th degree black belt by Kovaleski in 2011. She also works as a martial arts instructor; her favorite weapons are the hook swords.
Northern California was her home in 1983 where she worked with the West Coast Demonstration Team. At this time Golden Harvest was searching in Los Angeles for the next Bruce Lee. Rothrock’s forms and maneuvers were observed and Golden Harvest signed a contract with her. It was two years (1985) later that she made her first martial arts movie for them, Yes, Madam (also known as Police Assassins or In the Line of Duty Part 2) which also starred Michelle Yeoh. It proved to be a box office success. She ended up staying in Hong Kong until 1988 doing seven films there.

Lee Haney
Lee Haney is a former American IFBB professional bodybuilder. Haney is the joint record holder, along with Ronnie Coleman, for winning the most Mr. Olympia titles, with eight. A devout born again Christian, Haney has his own program on the Trinity Broadcasting Networkcalled “TotaLee Fit with Lee Haney,” where he is usually joined by famous Christian sportsmen, and on occasion his wife. On the show he teaches the importance of both physical and spiritual growth. One of his most famous quotes is that we should “train to stimulate, not annihilate.”
He and his wife reside in Fayette County, Georgia. Their two children are now in college. President Bill Clinton appointed Haney chairman of the President’s Council on Physical Fitness and Sports.
In October 2005, Ronnie Coleman tied Haney’s Mr Olympia record becoming only the second person to win eight consecutive Mr. Olympia titles. Haney is a graduate of Spartanburg Methodist University, where he earned a degree in child psychology.

Dan Gable
Dan Gable is legendary  American amateur wrestler and head coach. He is best known for his tenure as head coach at the University of Iowa where he won 16 NCAA team titles from 1976–1997. He is also famous for having only lost one match in his entire Iowa State University collegiate career – his last – and winning gold at the 1972 Olympic Games in Munich, Germany, while not giving up a single point.  October 25, 2013, is recognized as Dan Gable Day in Iowa.
Although Gable was not permitted to wrestle on the varsity wrestling squad during his freshman year, he was an undefeated state champion during his sophomore through senior years. The only recorded high school loss suffered by Gable was during his freshman year when he lost an unofficial match to teammate Michael DePaschalis. After high school, Gable wrestled for the Iowa State University Cyclones of the Big Eight Conference. Gable wrestled for Iowa State’s varsity squad for three years and won two NCAA titles. Gable’s overall collegiate mark was 181–1. His only collegiate defeat was in his final match where he lost to Larry Owings of the University of Washington. Gable wrestled on the national freestyle wrestling circuit between 1967 and 1976 where he earned a record of 67–4. He wrestled internationally between 1971 and 1973 where he earned a record of 30–1. Overall, his freestyle record was 97–5.

Joe, Ben and Betty Weider
Joe Weider was a Canadian bodybuilder and entrepreneur who co-founded the International Federation of BodyBuilders (IFBB) alongside his brother Ben Weider. He was also the creator of the Mr. Olympia, the Ms. Olympia and the Masters Olympia bodybuilding contests. He was the publisher of several bodybuilding and fitness-related magazines, most notably Muscle & Fitness, Flex, Men’s Fitness and Shape, and the manufacturer of a line of fitness equipment and fitness supplements.
Weider was born in Montreal, Quebec, Canada, to Louis and Anna, Jewish immigrants from Poland. He published the first issue of Your Physique magazine in 1936 when he was 17 years old, and built a set of barbells out of car wheels and axles the same year out of the family garage on Coloniale street in Montreal. He designed numerous training courses beginning in the 1950s, including the Weider System of Bodybuilding.

Ben was the co-founder of theInternational Federation of BodyBuilding & Fitness (IFBB) along with brother Joe Weider. He was a Canadian businessman from Montreal, well known in two areas: Bodybuilding and Napoleonic history.
In bodybuilding he founded and ran a physical fitness and sporting goods company bearing his name. He was IFBB president until October 29, 2006, when he announced his retirement.
In Napoleonic circles Weider was known as a forceful advocate of the theory that Napoleon was assassinated by a member of his entourage during his exile in Saint Helena. He co-authored several books, Assassination at St. Helena and Assassination at St. Helena Revisited, with Sten Forshufvud and The Murder Of Napoleon, with David Hapgood about this. Weider also founded the International Napoleonic Society, of which he was the President, and wrote numerous articles for this organization.Betty Brosmer  is a former American model and author. After marrying bodybuilder and entrepreneur Joe Weider, she began a long career in the fitness and bodybuilding movements.

Betty started as a teenage model for the Sears & Roebuck catalog, and went on to model in other catalogs, advertising, and marketing materials at the national level. Her face could be seen regularly in full page ads in publications such as Esquire, Fortune, Time, Life and The Saturday Evening Post. She won her first beauty contest as “Miss Television” in the 1950s and her photo, posing at the top of the Empire State Building with the TV antenna, was a TV Guide cover. Winning more than fifty more beauty queen crowns, she became the highest paid pin-up girl in the United States in the 1950s, with her face and curvaceous figure appearing on more than two-hundred magazine covers.