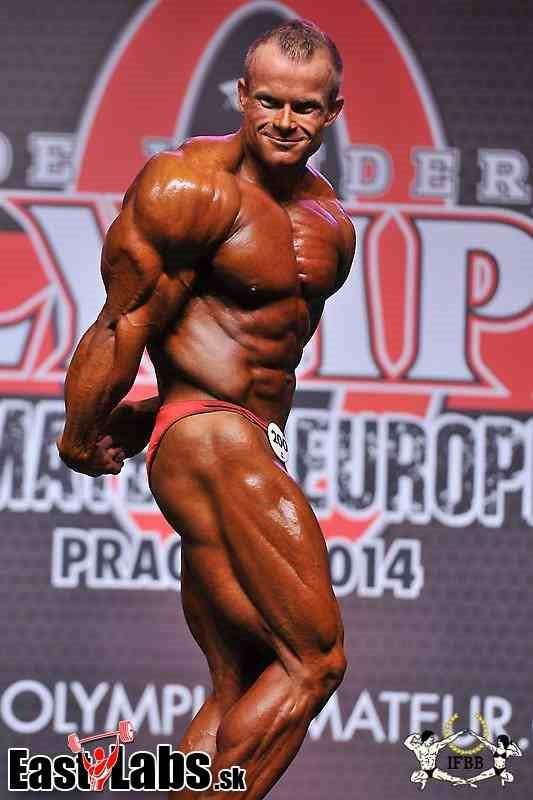 A preview of the Arnold Classic Europe in Spain by ifbb.com’s Andrew Michalak.

Bodybuilding still remains the most popular division at Arnold Classic Europe (and in the entire IFBB). Adding together classic bodybuilders, men (senior) bodybuilders, juniors and masters we receive nearly 220 athletes. More than bikini fitness girls (less than 190) and men’s physique competitors (less than 140). Among them we can see many stars of the top brightness. There will be two megastars: Andriy Kukharchuk of Ukraine and Petar Klancir of Croatia. If in a top shape, they should meet in the overall battle. Kukharchuk is a phenomenal bodybuilder who is able to win World Championships medals in both classic and extreme bodybuilding. He did it last year, finishing 2nd at the World Bodybuilding Championships in Brasilia and winning the overall title at the World Classic Bodybuilding Championships in La Nucia few weeks later. In Madrid we will see him in bodybuilding up to 95 kg category.
Petar Klancir is a super heavyweight bodybuilder who was a bit unfortunate in 2014, finishing as a runner-up in two prestigious events: Olympia Amateur Europe in Prague and Arnold Classic Europe in Madrid. At both events he slightly lost to future overall winners: Roman Fritz (in Prague) and Vitaly Fateev (in Madrid). He won the overall title at the 2014 Balkan Championships. We can expect to see him even bigger and better this time. Last year in Madrid his bodyweight was 113 kg.
Now have a look who are favorites in each category.

Men’s bodybuilding up to 70 kg:
Two Spanish bodybuilders: Miguel Lopez Blanco and Jonay Mesa Navarro will be very serious candidates for the final victory. Lopez is the last year’s runner-up, who lost to Antonio Herrera only but Herrera will not compete this year. Mesa also lost to Herrera but at the 2015 Olympia Amateur Spain and it was a closer battle. Appetite for medals will also have: 2015 European Championships 3rd place winner Marcos Cunha Pereira (Portugal) and coming back after 2 years break Enzo Mascaro (Italy) who was 5th in 2013.

Men’s bodybuilding up to 75 kg:
The next Spanish star who seems unbeatable: Alberto Abad Aparicio. He finished 2nd in 2013, separating two former multi world champions: Jose Carlos Santos (Brazil) and Corrado Maggiore (Italy). This is the best evidence of his power and possibilities. At the 2014 World Championships he finished 4th, but once again ahead of Maggiore and the other world champion Igor Kocis (Slovakia). Who will be able to challenge him? Probably, only Maurizio Montalto (Italy), 4th place finisher at the 2014 Arnold USA. Maybe Andrei Tikhonov (Russia) if quickly progressing (but never in the top three before).

Men’s bodybuilding up to 80 kg:
Long category, with elimination round, and 3-4 equal candidates for the final triumph. Mauricio Velazquez Mandragon (Mexico) won the last year’s Olympia Amateur Latin America and then the North American Championships what was even more difficult. At this year’s Arnold USA he finished 4th. Must be in his life condition if dreaming about victory in Madrid.
Jonathan Reverte Roldan (Spain) is a former European champion, who also won 2013 Arnold Europe but was less successful recently (10th place at Olympia Spain). Must show his peak condition this time. The next serious challenger (or maybe a favorite?) is Alex Zuccaro (Italy) He won 2011 Arnold USA and was runner-up at 2014 Arnold Europe (being tied 36:36 with the winner Eric Kafindo), so maybe he will be more lucky this time. And what about the 2014 Olympia Amateur Europe 3rd place winner Andrey Yashchenko (Ukraine)? Ukrainians like to surprise us with top quality muscles and definition.

Men’s bodybuilding up to 90 kg:
Rather shorter and colourless category. Aliaksandr Borsan (Russia) moved from 5th place in 2013 up to 3rd place last year and it seems that he will have an unique opportunity to grasp the title this year. Josef Furin (Czech Republic) will be his main opponent. But Furin is a former classic bodybuilding world champion, who recently moved into extreme bodybuilding, finishing 4th at the 2014 Olympia Amateur in Prague. Greek bodybuilder Georgios Athanasiou will debut in the IFBB, so will show his real potentials.

Men’s bodybuilding up to 95 kg:
This is a category with first megastar: Andriy Kukharchuk (Ukraine). There is nobody in the list who would be able to challenge the World Championships runner-up and classic bodybuilding overall champion. Top European junior Vladimir Iacovlev (Moldova) and Andrey Kulik (Belarus) will probably fight for the rest of medals.

Men’s bodybuilding up to 100 kg:
This is a category with the longest line-up of 21 bodybuilders. Among them few athletes with equal chances for winning. Jakub Šubrt (Czech Republic) finished 3rd at 2015 Olympia Amateur Europe in Prague, Kille Kujala (Finland) did very well at the last year’s Arnold in Madrid (2nd place) but at this year’s Olympia Amateur in Torremolinos he… dropped out of the top 15! Must improve his muscles quality and definition. Ioannis Magkos (Greece) came to the IFBB from other organizations but took part in one contest only: 2015 Mediterranean Championships, where he won his class. Will he continue this “golden” series? This time he will have more demanding rivals.
Then two well-known Spaniards: Olympia Spain 4th place winner Usman Bathily and 6th place winner: Eduardo Urrutikoetxea, who is also this year’s European Masters Championships runner-up. Plus a group of three experienced Russian bodybuilders: Vladislav Fatianov, Igor Vybornov and Alexandr Baraulia. They have enough potentials to fight for medals also.

The schedule for men’s bodybuilding categories: