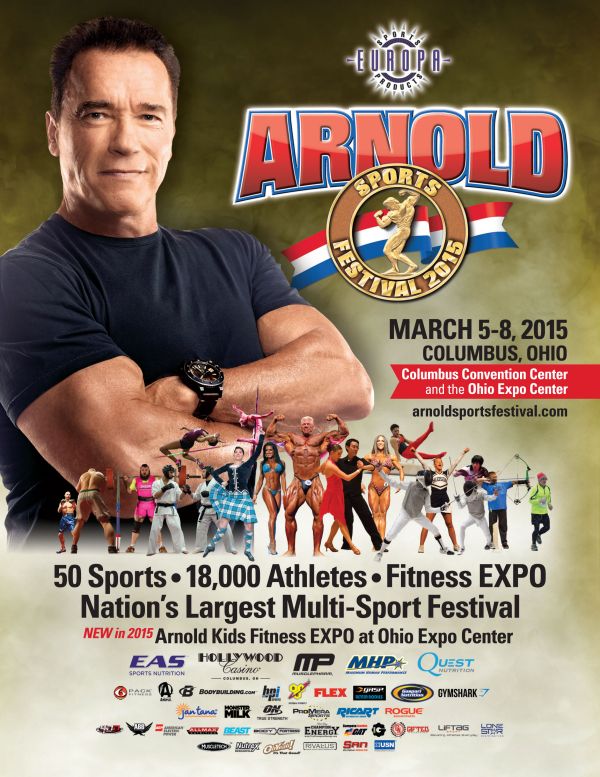 List of athletes nominated by National Federations and accepted by the Organizers has already been published. There are 819 names on it, what means that this year’s Arnold will be the biggest ever. Following the introduction of the IFBB Arnold Amateur categories in Columbus, the number of amateur participants has been raising around 100 each year: 2012 – 464 athletes; 2013 – 589 athletes, 2014 – 685 athletes; 2015 – 818 athletes. If this trend continues, 1000 participants barrier should be broken in 2017.
This is a result of the physique sports growing popularity as well as of the policy run by the IFBB and its President Dr. Rafael Santonja. This policy is open for new expectations and new trends in the societies resulting in introduction of new, very popular and “cool” categories. The number of athletes entered in women’s bikini fitness and men’s physique reached exactly 50% of this year’s participants.
Looking at these numbers we can be proud but this situation creates also a big logistic challenge. Having 804 competitors at the last year’s European Championships, we needed 4 days to run the contest and it was done in hurry! Probably, Arnold Classic promoters will have no choice but add an extra day to this event in the future to have enough time to run Prejudging in all these amateur categories (37 official classes this year!).

Looking for the stars coming to compete in Columbus this year, we will begin with the oldest and most prestigious men’s bodybuilding categories. Altogether, over 120 bodybuilders will come plus 25 classic bodybuilders and 30 master men bodybuilders.

Up to 70 kg category
Unexpectedly long line-up with 19 competitors. Last year winner Lee Lap Chi is not coming, the runner-up Hira Lal (India) moved up to the next category. But the 3rd place winner Makoto Tashiro (Japan) will be there and will have a great chance for his life achievement. But he will have no easy way. He will meet last year’s finalist Gordon Singh (United Kingdom), 2013 World Championships bronze medal winner Karanjeet Singh (India) and two top bodybuilders from Sri Lanka: 2014 Worlds bronze medal winner and Asian champion Subash Siriwardana and 6th place winner Ranil Sampath (both in 65 kg class). The next two demanding champions: 2014 Arnold South America winner Uelinton Aragao (Brazil) and 2014 North American champion Eduardo Corona (Mexico). Plus 2011 Asian champion Manoj Majumder (India). This will be one of the toughest categories, with few pretenders to the top trophy.

Up to 75 kg category
Shorter class, with terribly strong dozen of competitors. First of all, top two from the last year’s Arnold: Hamad Alshatti (Kuwait) and Antonio Bellaroba (Switzerland). Then the 4th place winner and Arnold Brazil winner Francesco de Assis (Brazil). Moreover, former world champion Hira Lal (India), who will debut in this category, so will be bigger and better. Then 2014 Asian Championships 4th place winner Tien-Chin Lin (Chinese Taipei). It may be expected that these competitors will run a battle for top places. Alshatti is a favourite if repeat his peak condition, but sometimes he fails (7th place a the 2014 Asian Championships). Next, there are three famous athletes who were the Arnolds runners-up: Bellaroba (2014), de Assis (2012) and Lal (2013 and 2014 in 70 kg class). For sure, each of them will come to Columbus this year with strong determination to finally grasp the top trophy! Who will have it in his bag flying back to his homeland?

Up to 80 kg category
Full semifinal of 15 athletes. The last year’s winner Mirko Caselli moved up to the next category but the next two competitors: Isaquiel Balbi (Brazil) and Masashi Suzuki (Japan) will be there, having the door to the top trophy open. But they have two very serious challengers: Ariel Guong (Kuwait) and Aleksey Denisov (Russia). Guong haven’t lost any contest in the past two years, winning two Arnolds Europe in Madrid and 2013 Amateur Olympia. Now, in the heavier class, he will look even more muscular. Denisov is the European Championships runner-up. Balbi won the two latest Arnold Classic Brazil and was the runner-up at two previous Arnolds. He will do his best to win the title in Columbus but will he be enough good to win over Guong? Taking into account the latest Guong’s series of victories I consider him the main pretender to the top title. Who may be a “dark horse”? Maybe Abdullah Boudastour (Kuwait) who finished 3rd at the 2014 Arnold Europe or Harrinson Bermudez (Venezuela) who placed 5th at the 2013 Arnold Brazil in 75 kg category? Venezuela has always provided top quality bodybuilders.

Up to 85 kg category
There are some old champions who are coming back this year like three-time European champion Nikolai Chernetckii (Russia) – winning his last continental title in 2008. And a “fresh blood” like last year’s Arnold winner Mirko Caselli (Italy) but in 80 kg class, so now will be bigger, 2014 Asian champion Mohammad Alhawaj (Kuwait), 2014 Olympia Amateur Latin America winner Mauricio Velazquez (Mexico) and 2013 CAC champion Gilberto Vázquez (Dominican Republic). The next serious candidate: 2014 Team Universe runner-up Darnell Griffin (USA). The top battle? Maybe Chernetckii vs. Caselli? With Alhawaj lurking just behind their backs? Velazquez as a “dark horse”?

Up to 90 kg category
The biggest category, with over 20 athletes and a real revolution: nobody from the last year’s finalists! But there is one clear leader Ahmad Ashkanani (Kuwait), and a lot of “physiques of the future”. Ashkanani won the 2013 Arnold Europe and 2013 Olympia Amateur. At the 2014 Asian Championships he placed 2nd, being tied with the winner (Khalil Asadi) who then won the overall. Ashkanani was nominated to the 2014 Olympia Amateur World Showdown in Moscow but didn’t come. If in top shape, he should have rather an easy way to the top. Who could press him? Two rising stars from Team Menace: Adya Novali (Singapore) and Baleegh Almohaimeed (Saudi Arabian representing Hong Kong this time) guided by Dennis James? Maybe 2013 Arnold Europe finalist Jose Luis Fernandez (Colombia) or Reynold Domalsin (Philippines) who was successful in the other organization and will debut in the IFBB now?
Up to 100 kg category
Once again nearly 20 competitors and once again one great favourite: John Andrew Cifra from Kuwait, Captain in the Oxygen Gym. Cifra won the 2013 Olympia Amateur and 2014 Arnold Europe, losing in overall to Vitaly Fateev only. Who could try to fight against him? The European Championships runner-up Chakib Bouhlal (Italy)? 2014 Arnold Europe finalist Ivan Kochetkov (Russia)? Or his team-mate Denis Maleev who moved from classic bodybuilding (3rd place in the 180 cm class at the 2013 Arnold USA)? Maybe Katsuaki Suzuki (Philippines) who placed 6th last year but in 85 kg class? The next interesting personalities: former world junior champion Rodrigo Piriz (Uruguay), who finished in the 5th place 2 years ago in Columbus, the 1st Olympia Amateur Africa winner Michael Adonis (South Africa) or the last year’s Arnold Brazil 3rd place winner Roberto Neder (Brazil)? This category likes to bring unexpected results like 2013 victory of Emiliano Dell’uomo over Kamal Abdul Salam and Oleksandr Slobodyanyuk Will this happen this time? Hard to believe but in bodybuilding there is always a big “but…”.

Over 100 kg category
Shorter class, with a dozen of competitors and no famous stars among them. The stage will belong to rising stars like last year’s 3rd place winner Sergey Kulaev (Russia) or bronze medal winner at the 2012 Asian Championships Sayed Ahmed Alrefaei (Kuwait) or the next Saudi in the Hong Kong team Mohammed Al Meshal, who took the 3rd position at the 2013 Olympia Amateur. There will also be the other former classic bodybuilder Miroslav Kalich (Czech Republic) and 2013 Worlds finalist in 100 kg class Mduduzi Green (South Africa). Anyway, Kulaev seems to be the most serious pretender to victory.