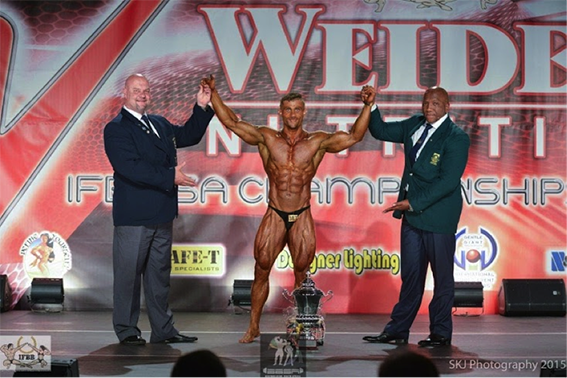 “A well organized, successful event” were the comments from both athletes and spectators who came from across the country to attend and compete in the most prestigious event in South Africa, The IFBB South African Championships.  This year, the show was held in the heart of Gauteng, at the five star Sandton Convention Centre, which raised the standard of the show to new heights. 395 athletes from all over South Africa represented their provinces in 42 different divisions, attracting over 3000 spectator over the two-day period.

The main sponsor for the event was Weider Nutrition who not only contributed greatly towards the finances for the show; they also included supplement samples for each athlete as well as a stall where athletes and spectators could relax on couches with cell phone charging stations.

The event included a full fitness exhibition with well-known brands such as; Angels and Demons, Gorilla Wear, Hot and Fit, Imyg Gym wear, The Runway Collection, Second Chance, Your Fit Store, Liquid Salt, Auto Investment, Rush AVG Garments, and Six Pack Fitness. Various activities in the exhibition area ensured for a vibrant and exciting atmosphere such as; The Strict Arm Curl Event (which will also be one of the events at the 2016 Arnold Classic Sports Festival in South Africa) and Clone Me 3D who created life-like statues of athletes and spectators. The expo area also included a Kiddies Entertainment Area (sponsored by Mr Safe T Safety and Event Specialists).

The athletes area included mattresses (sponsored by Quality Bedding) to ensure a comfortable, stress-free environment for all competitors. Several optional services were offered backstage such as; spray tanning done by Tan Angelz and hair and make-up done by Ultimate Glamour.

For the first time at any South African Fitness and Bodybuilding event, the athletes warm up area included a fully equipped gym, sponsored by Carlton Gym, ensuring that the athletes were pumped up and looking their best on stage.

Other sponsors included Designer Lighting, North and Robertson, Trifocus Fitness Academy, Steyn, Strydom and Viljoen Attorneys, Sandton Convention Centre, Gearhouse and Two Way Exhibitions. Nicole Acker, a legendary IFBB Pro Athlete, sponsored all the medals as well as the trophies. She specially travelled from the USA to attend the event and hand out trophies to selected divisions on stage.

All competing athletes were in exceptional shape. Well-known names as well as several new comers to the bodybuilding scene battled it out and two panels of judges ensured that the judging was done at an exceptional standard.

The IFBB SA lucky ball was thrown into the crowd at certain intervals throughout the show and cash prizes were awarded to audience members. The entire event was run smoothly, flawlessly, and the overall experience of the show was absolutely amazing.

Mr Safe-T Safety and Event Specialists contributed greatly to the success of the event by ensuring that the event met all the necessary and highest possible professional security standards.

Overall this was one of the best IFBB South African Championships that South Africa has seen. Well done to the entire team for hosting an exciting, unique event. This event was a great stepping stone to the Arnold Classic Sports Festival that will be hosted at the Sandton Convention Centre in 2016 where over 40 different sporting codes will be represented.