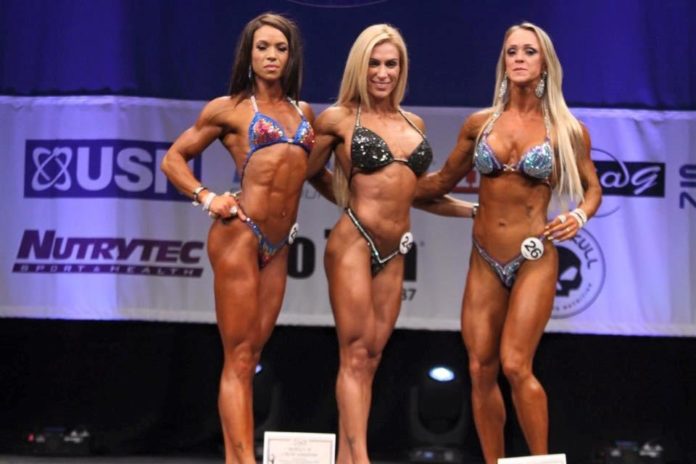 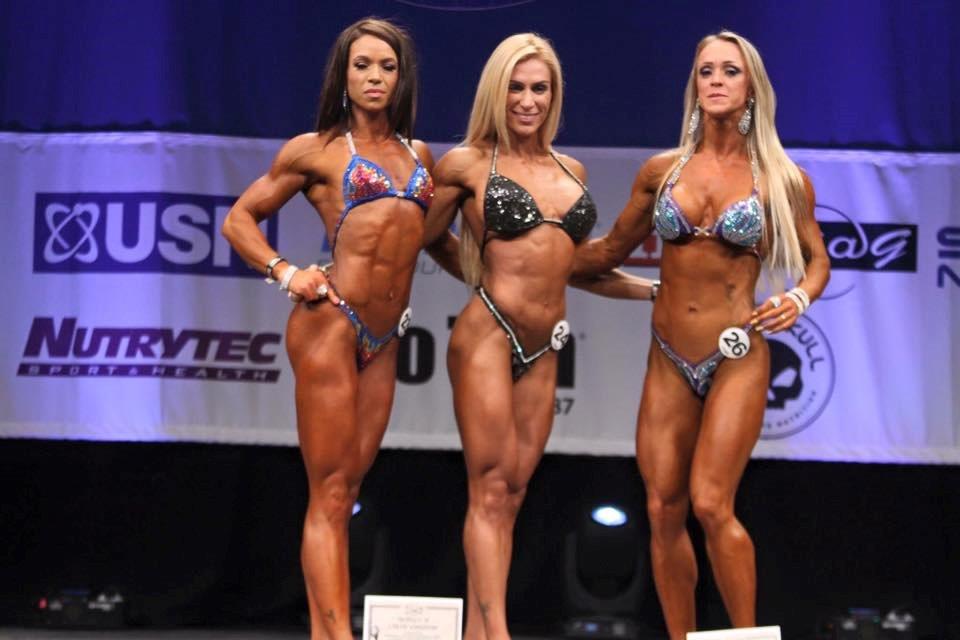 Day 1 of the Olympia Amateur in Liverpool was mainly devoted to women’s sports, with addition of the Men’s Physique 5 categories.

BIKINI-FITNESS:
Up to 160 cm category: Very close combat of the world champion Sabina Plevakova (Slovakia) against less-known internationally new Canadian star Hien Nguyen. Both rounds went 10:11 for Nguyen. Pharmacy technician, Nguyen, started competing in June 2014, already winning three local shows in Canada. In Liverpool was her international and so impressive inauguration. Then Hungarian internal duel: Dora Bodo vs. Virag Kiss. Both were tied 17:17 in the finals but Bodo was declared the 3rd place winner.

Up to 163 cm category: The next very tough battle of the current world champion Hanna Garbos (Poland) and the next victory of less-known challenger: Daria Malykh (Greece). Garbos was a leader by 1 point over Malykh after the first round but in the finals one judge changed his/her opinion and both girls were tied 12:12 what gave 1st place to Malykh (according to the closer analysis of the judges’ scores). Not so far behind them (two-point gap) Jessica Stefanini (Italy). It was the second international appearance of Malykh, who debuted at the 2013 Ben Weider Diamond Cup in Athens, Greece, taking 3rd place in an open category, represented Russia at that time.

Up to 166 cm category: Diana Salamon (Hungary) usually competes in 169 cm class running close battles against Karina Skowronska (United Kingdom). This time she was measured 165.8 cm and Skowronska was nominated but didn’t come. All these changes occurred to be fortunate for Salamon as she won this class and later on the overall title. It is her first victory this year, after silver medal at the European Championships and 3rd places at Olympias in Spain and the Czech Republic. The silver medal went also to Hungary as Timea Varga took this place after a close combat against Joanna Wolosz (United Kingdom). Wolosz entered the medal zone for the first time and it is a good prognostic for her before the World Championships.

Up to 169 cm category: In the absence of Skowronska and Salamon, it was a good opportunity for the rising stars to battle for the top places. Mariella Pellegrino (Italy) won both rounds and grasped the title, ahead of four British competitors, with Gemma Stanley in the 2nd position and Adrianna McDonald in 3rd place.

Up to 172 cm category: Catharina Wahl (Norway) who won most of her top places in the higher class (over 172 cm) was measured 171.7 cm this time and joined a group of top international stars in this class. Anyway, she was lucky, moving up to the 1st position in the finals, ahead of 2015 Arnold Europe 2nd place winner Emma Howie (United Kingdom), who was the leader after the Prejudging. 2015 Olympia Spain winner Daniela Bečková (Czech Republic) won a week earlier the overall title at the Melo Classic in Dublin and had to accept 3rd place this time. Then 3rd place finisher at the Olympia Spain Helga Stibi (Ireland). 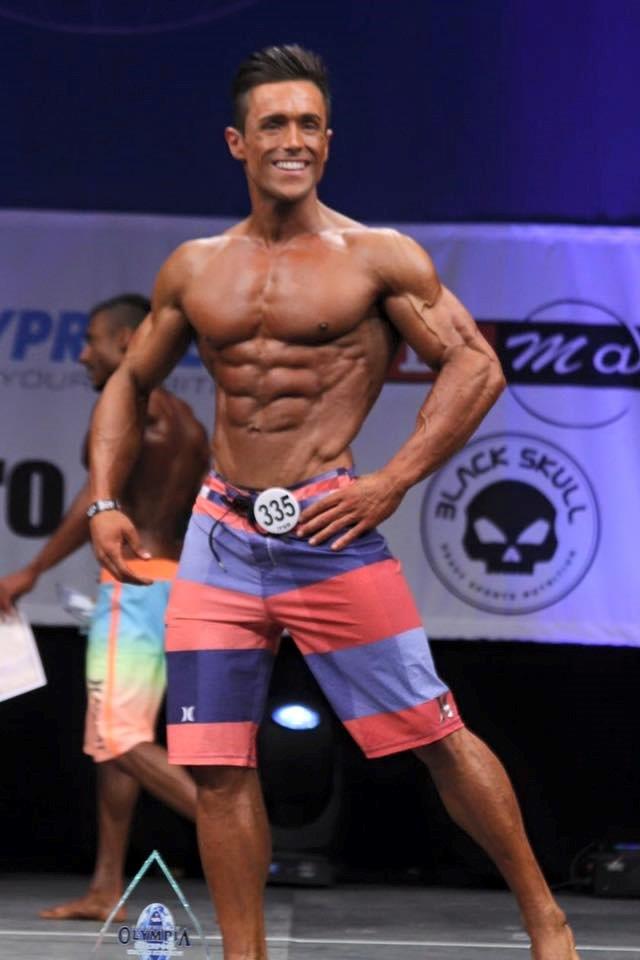 Over 172 cm category: Canadian star Jill Bunny won both rounds and took the first so prestigious title in her sport career. Behind her we can see two rising stars from the United Kingdom: Sofi Smart and Alla Meyer. The next three competitors, in places from 4th to 6th and one-point gaps between them: Nadine Kerastas (Germany), Agnes Lukaszek (United Kingdom) and Shirley van den Bos (Netherlands).

Up to 163 cm: Great comeback of two-time European champion and Arnolds winner Angela Derzpaf (Germany). It was her first appearance after the World Championships in Montreal. She displayed a top body condition clearly winning both rounds, ahead of the latest Arnold Europe winner Maria Bozinowska (Spain) and later on won the overall title as well. Then, in the 3rd place, a little surprise: Rikke Meyhof (Denmark). Up till now she competed in the Nordic events only, winning the 2015 Leaded Cup in Denmark and finishing 5th at the Nordic Championships in Lahti. In Liverpool she placed ahead of so well-known stars like the European Championships finalist Cristina Menini (Italy) and South American star Letícia Vecchi (Brazil).

Up to 168 cm: New competitor from the United Kingdom, Michelle Leach, was running a very close battle against experienced Greek star Aikaterini Megalou. Leach, who debuted internationally, was a leader after the Prejudging but in the finals Megalou overcame her by 1 point and won the class. Megalou has been on the stage for over 10 years but turned to the IFBB in 2013. In this season she finished 4th at the Olympia Spain and 6th at Arnold Europe. This success in Liverpool is her best achievement in the IFBB. In the 3rd place Brazilian star and Arnold Europe runner-up Claudia Galhoti.

Over 168 cm: So many stars performed in this class that some of them placed out of the finals. Olympia Prague winner Noelia Segura (Spain) in the 8th position this time. 2015 Arnold Brazil winner Eliana Romano (Argentina) in 7th place. The latest Nicole Wilkins Championships winner Lesley Barents (Netherlands) was a leader after the Prejudging but failed to keep this place in the finals dropping to the 3rd position. At the top a close battle of the Olympia Prague runner-up Ellen Elizabeth Berg (Norway) and rising star from the Netherlands Ramona Curiel. They were tied 16:16 in the semifinals (in 3rd place) as well as in the finals (13:13) in the 1st place, which finally went to Berg. Austrian star Christine Schranz was a ruuner-up in the first round but finally took the 5th place, behind Spanish star and Arnold Europe 2nd place winner Sara Rodriguez. In this crowd of the stars, 2014 World Championships bronze medal winner Barbara Molyneau (Canada) finished in the 6th position.

Men’s Physique:
Over 80 competitors participated in five Men’s Physique classes. In general, the contest was very successful for competitors from Portugal and Kuwait who won many top places.

Up to 170 cm class: European champion and Olympia Prague 2nd place winner Alexis Gonzales (Spain) definitely won both rounds and later on the overall title as well. In the 2nd position new face from Portugal Hélder Martins da Lomba and then Arnold Europe 8th place finisher Ahmad Al-Jadi (Kuwait). 2015 Arnold Europe 3rd place winner Juan Salomon (Spain) in the 4th position this time.
Up to 174 cm class: Olympia Prague winner Johannes Falke (Germany) in the 7th place. Arnold Europe winner Nelson Rodrigues (Portugal) was at the top after the Prejudging but in the finals dropped to the 2nd place, behind new face from Kuwait: Bader Alsabaa. The 3rd position to Aikeem Reid of the United Kingdom.

Up to 178 cm class: The next Kuwaiti – Portuguese duo at the top: Arnold Europe 10th place winner Abdullah Alsaraf (Kuwait) improved so much that clearly won both rounds ahead of Eduardo Martins da Fonseca (Portugal) who was 6th in Madrid. Then, in the 3rd place, European champion Jones Ahmad (Sweden) and in the 4th position Olympia Spain winner Andrea Mosti. The biggest sensation: European champion and World Championships runner-up Grzegorz Placzkowski (Poland) out of the semifinals. Too muscular?