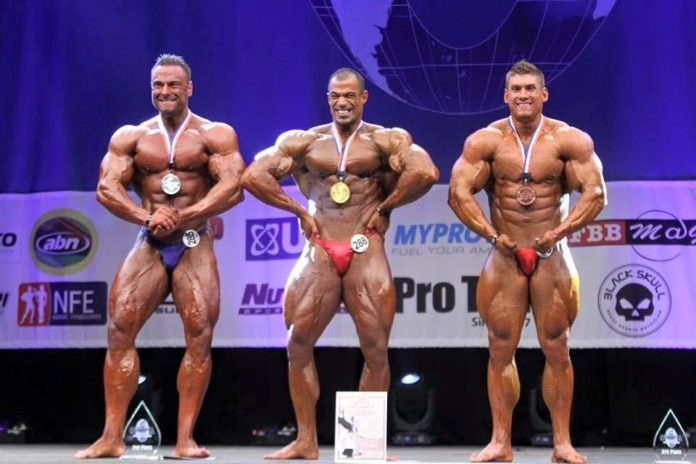 Up to 75 kg: Former Asian champion and Arnold USA winner Hamad Alshatti (Kuwait) showed top body conditions and received perfect scores from the judges. His most demanding opponent was Antonio Bellaroba (Switzerland). They met at the Arnold USA earlier this year, where Bellaroba finished in the 5th place. He had a very good 2014 season, being a runner-up at Arnold USA and 3rd place winner at Arnold Europe,

Up to 80 kg: Alex Zuccaro (Italy) was considered favorite and he was at the top after the semifinals but both final rounds were less successful for him and he moved down to the 4th position. At the top we can see two less-known challengers: Fabio Lopes (Portugal) and 2014 Olympia Amateur Showdown finalist Meshal Alshamlan (Kuwait).

Up to 85 kg: Arnold Europe 4th place winner Janos Csuhai (Hungary) was in a top condition, winning all three rounds. Then there was a close combat for the 2nd place between Simone Meiattini (Italy) and Tony Bailey (United Kingdom). Meiattini kept the 2nd place in the first two rounds but lost it by 1 point in the routine round, dropping to the 3rd position.
Up to 90 kg: All competitors were rising stars and their battle brought the victory to Ahmed Fawzi (Switzerland), ahead of Enrico Hoffmann (Germany) and Chris Jones (United Kingdom).

Up to 100 kg: With 6 competitors in the start list, only two final rounds were run. Both went to Hassan Jama of Canada, who debuted in the IFBB at the 2014 Olympia Amateur Latin America in Mexico, finishing in 2nd place. This time he was a winner, ahead of Andre Niebergall (Germany) who returns to the stage after few-year break and Nicholas Anthony of the Netherlands.

Over 100 kg: There was a long line-up of 14 bodybuilders, with many well-known names. The title went to 2014 Asian champion and Arnold USA finalist Abdulhadi Al-Khayat (Kuwait) who got the perfect scores in the finals. Just behind him, a real giant from Germany, Paul Poloczek, weighing over 123 kg. In the 3rd position former Arnold Europe junior champion Raul-Gheorghe Maghiar (Romania) and this is his best achievement in the men’s division. The rest of the finalists were experienced bodybuilders with a long contest history: Fabio Petruio (Italy), the next over 120 kg giant Jaroslav Paseka (Czech Republic) and Markus Hoppe (Germany).
The overall title went unanimously to Abdulhadi Al-Khayat (Kuwait).

Up to 180 cm: Full semifinal with 15 competitors on the stage and a close battle for the title between Gergely Arnold (Hungary) and Dejan Guzej (Slovenia). After his turning to the IFBB in 2014, it is the best competitive season for Arnold, with 3rd place at Arnold USA and 4th place at Arnold Europe. Still improving, he got his first victory in Liverpool. Guzej is a new rising star from Slovenia and even won the routine round over Arnold. Interesting and promising international debut. Then the next new face: Adrian Kraft of Germany and former European Championships runner-up Antonio Ludovico (Italy).

Over 180 cm: Unusual situation: Wastecley Moraes Costalima (Spain) participated in Classic Bodybuilding competitions from 2011, placing in the top three at Arnold Classic Europe in 2011 and 2012. 2013 and 1014 seasons were less successful to him (8th place at the 2014 Worlds), so he decided to try in the Men’s Physique division this time but… was retreated from the stage by the Chief Judge (due to his too big muscles for this division), with kind advice to move back to Classic Bodybuilding. Heaving no other choice, he entered the stage with classic bodybuilders and… won not only his category but the overall title as well! Every cloud has a silver lining – we can say in this situation. He left behind him British champion Zack McGuirk and Andrej Markovic of Slovakia.