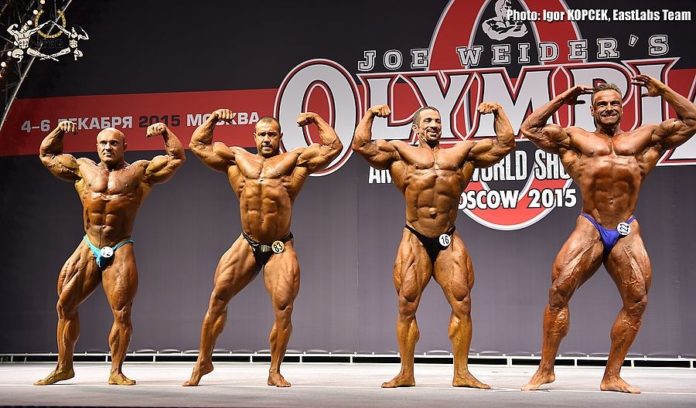 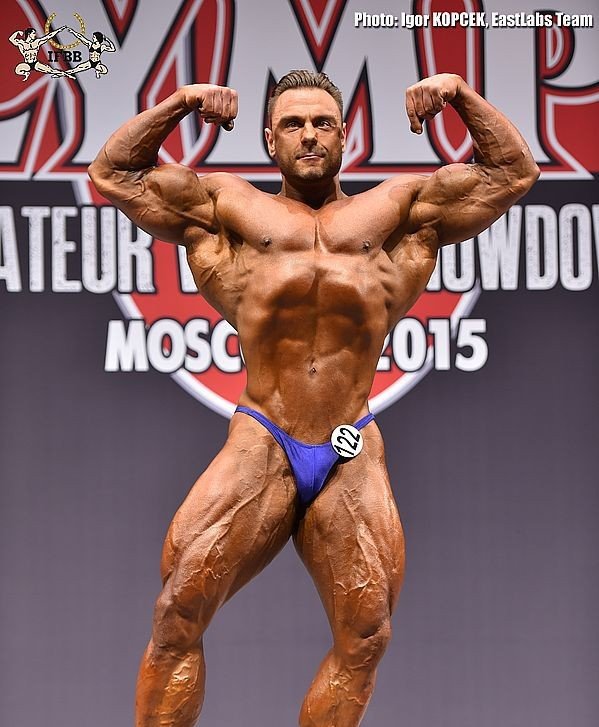 Olympia Amateur Moscow was the closing event for the 2015 Olympia Amateur series, included 7 events: 4 in Europe, 2 in Asia and 1 in Australia. Held at the prestigious Sokolniki Exhibition and Convention Center, with modern and impressive stage design and lighting system, was an interesting and exciting show. At the end, four overall winners were declared by the judges and congratulated by the IFBB President Dr. Rafael Santonja. They have got a right to turn Pro. But first semifinals and finals in each category were run and it was not less interesting battle.

MEN’S BODYBUILDING
In short, Iran brought a very strong team, with many famous bodybuilders, including world and continental championships medal winners. Moreover, most of the showed perfect body conditions what allowed them to win 4 of 5 categories. Russia was represented by even more bodybuilders but didn’t win any category, having 4 runners-up. The next 20 countries entered smaller teams, usually single stars. This situation is well-reflected by number of medals won by the teams. From among 15 medals in total, Russia won 7 and Iran 5, with single medals for Algeria, Germany and Kazakhstan. But 4 gold medals went to Iran and 1 gold to Algeria.

Up to 75 kg category
Iranian bodybuilder Mohsen Zarebayegi won all three rounds giving his opponents no chance to challenge him. Mohsen has a perfect frame for bodybuilding, with small waist, wide lats and broad shoulders plus muscular legs. Silver medal for Andrey Tikhonov (Russia) from Krasnoyarsk Province. He won many regional and national competitions in Russia in 2014, including the 70 kg category national title, but was less fortunate at the international level (9th places at 2014 Arnold Europe and World Championships). Showed well-conditioned, hard and dried muscles, especially in the upper body, but needs to improve his legs and some mandatory poses. Probably, back poses decided on his defeat.
Mikhail Mikheev was the runner-up at three national contests in Russia this year, finishing third at the Olympia now.

Up to 85 kg category
This was the category won by the future overall winner Babak Akbarnia (Iran) and this victory seemed to be more difficult to him than the overall battle. Akbarnia won all three rounds but not with perfect scores and in the third round there was only 0ne-point gap between him and the next competitor Mikhail Dirun of Russia. Dirun lives in Serov, a city in the Sverdlovsk Province at the eastern foothills of the Ural Mountains. He has had over ten-year competitive career behind him but at the national level only. His best previous achievement was silver medal at the 2014 Russian Championships. He came to Moscow in his best life condition, with perfect muscle separation and definition, especially in the thigh area and was a very demanding rival to Akbarnia. Telling the truth, all finalists in this class were very well-prepared, especially 3rd place winner Yevgeniy Yakimov (Kazakhstan) and 4th place winner Mohsen Bakhtiarsalehi (Iran).

Up to 90 kg category
We could expect a tough battle between 2015 World Championships runner-up Zoheir Mihoubi (Algeria) and 2015 Arnold USA winner Ahmed Elzaiat (Egypt); instead Mihoubi had to run a close battle against new Russian star Ashot Kagramaniyan. He lives in St. Petersburg and started to compete in 2012 in 75 kg class. Last year won his first national title in 85 kg class and recently has moved to 90 kg category finishing 2nd at the Russian Nationals (behind former European champion Dmitri Klimov). Kagramaniyan debuted internationally at the 2014 Arnold Europe entering the semifinals (13th place). Having the biggest and fullest thighs in the line-up, he won the first round 12:24 over Mihoubi but the next day, in the finals, he lost a bit of definition and Mihoubi used this opportunity to overcome him, winning both final rounds. Nikolay Soloviev (Russia) won the bronze medal at the latest Russian Nationals (behind Kagramaniyan) and repeated this result now. Elzaiat was the tallest competitor in this class, so looked not so muscular compared to his shorter opponents and was scored in the 4th place this time. Last year’s 3rd place winner Mahdi Pirsarandib (Iran) didn’t impressed the judges so much this time and dropped to the 5th position.

Up to 100 kg category
The category really dominated by Iranian bodybuilders who entered 4 athletes to the finals. The rest 2 places for Russians. Very close battle at the top between two Iranian stars: World Championships runner-up (90 kg) Khalil Asadi and last year’s winner Morteza Oveisi Pakniyat. They met in one category by chance as the planned 95 kg class (with Asadi) has been combined with 100 kg category into one single class. And the battle started! First round 14:18 to Oveisi, the next slightly 14:16 to Asadi, so the routine round was decisive and it went also to Asadi 7:9. Asadi looked clearly better in two poses: “Back double biceps” and “Abdominals and thighs”. Oveisi’s wider waist couldn’t be hidden. Asadi’s balanced development and top definition was very impressive. But also the 3rd place winner Evgeniy Klochkov (Russia) was in his peak condition. Especially, looked great in the “Back double biceps” pose, with incredible thickness of his traps. In 2011 Klochkov was the Arnold Europe runner-up (85 kg class), then tried in the other organization, then returned to the IFBB. In October won the Russian Nationals (95 kg class). He was pressed by the next Iranian and last year’s runner-up Ayat Bagheri (they were tied 36:36 in the second round) but Klochkov was better scored (by 2 points) in the routine round and was the only competitor capable of challenging Iranian stars in this class.

Over 100 kg category
The favorite: Majtaba Notarki (Iran) didn’t fail. He came to Moscow in a peak condition, won all rounds and was crowned the super heavyweight champion. But his dream to win the overall and earn the Pro Card will have to wait till the next year. Paul Poloczek (Germany) was 2nd after the first round and was even tied with the winner in the third round but lost too many points in the second round (mandatory poses) to Ivan Vodyanov (Russia) and dropped to the 3rd position. Vodyanov began to compete as a junior in 2002 but had a break from 2003 till 2010. In 2014 won his first national title (in 100 kg class) and is a current Russian champion in over 100 kg category and the overall. At the World Championships in Benidorm entered the finals (5th place). The best year in his career. Poloczek – still far from reaching his full potentials. Wonderful body proportions and body lines but no visible progress in muscular development and details. More impressive in the back poses. The current European champion Aleksey Tronov (Russia) a bit off, lacking top definition and separation. Displayed a top quality in the first half of the year (won all 4 contests he participated in) but can’t reach his peak condition in the autumn season. Enough for 4th place only.