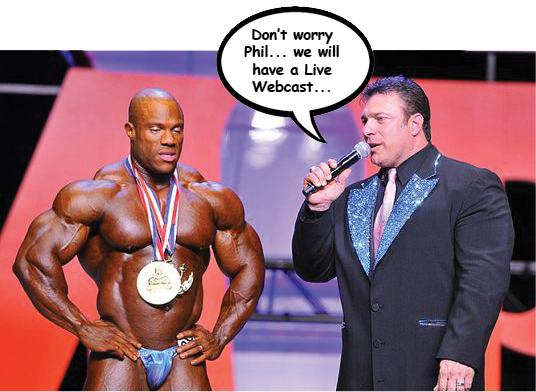 “Just because BB.com isn’t providing a webcast, doesn’t mean there wont be one… details soon”

This basically proves that bodybuilding.com will not be providing the ‘Live’ webcast feed.

Comments from Shawn Ray and now Bob Cicherillo basically made this a 100% fact.

Now, Bob Cicherillo has opened up a new door to this saga as he mentions that a company will be providing the bodybuilding fans with a ‘Live’ webcast.

Evolutionofbodybuilding.net has sent questions to ifbb.com regarding their new ifbbtv channel, asking if they would be covering the 2015 Olympia weekend via ‘Live’ webcast but till writing this article we have had no answer.

Evolutionofbodybuilding.net has also left a message on the MD Forum, but as usual they did not post our question because we are so called competitors.

Surely evolutionofbodybuilding.net and musclesportmag.com will be revealing more about this story in the coming days.

No Live 2015 Olympia Weekend coverage on Bodybuilding.com according to reports