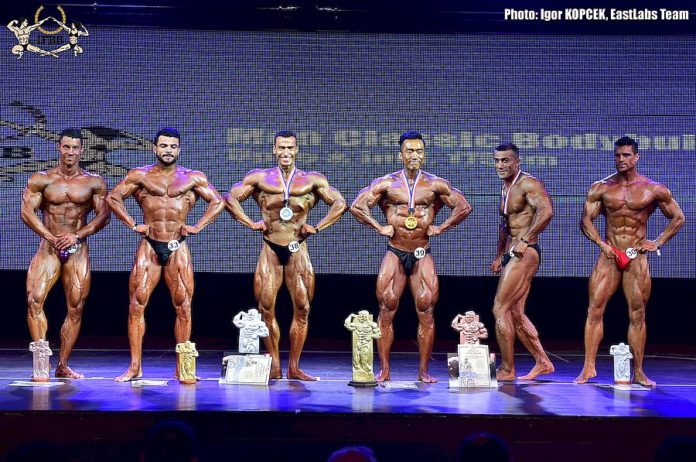 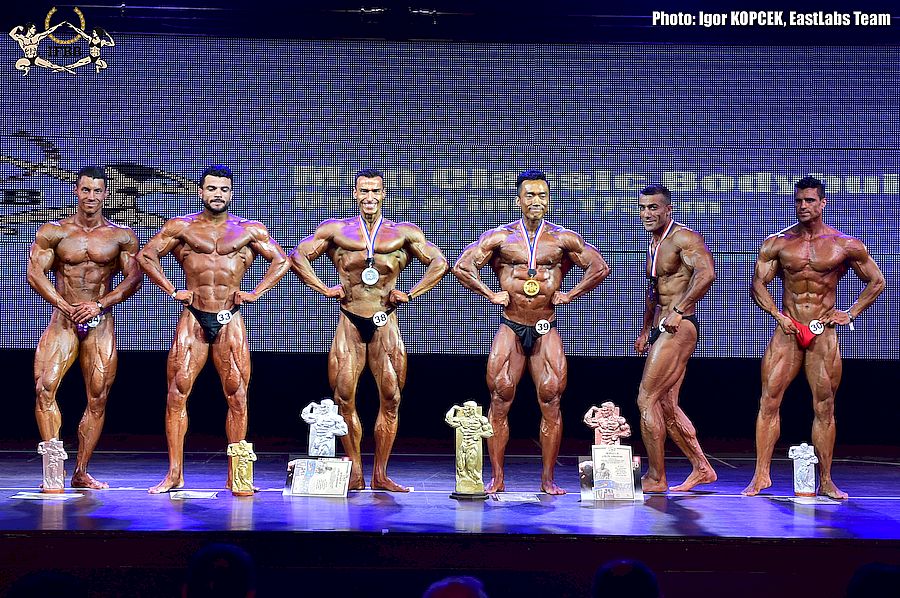 The venue – marvelous Benidorm Palace – is located around 400 m from the Melia Hotel, so there was no problem with the transport as all participants preferred walking and the weather was very “friendly” this time – warm and sunny.
The back wall of the stage was in a form of a big screen, where the IFBB logo was displayed. At both sides another two screens showing the battle on the stage. The front part of the audience was composed of chairs, the rest as a restaurant with tables. Perfect lighting and sound systems created fantastic technical conditions for this event.
What happened on the stage? Champions from over 60 countries were running battles for medals and trophies. Classic Bodybuilding was born in Europe 10 years ago, with the first World Championships in Ostrava, Czech Republic in 2006. After few years it was dominated by competitors from Iran, the Republic of Korea, Russia, Spain and some other European countries.

This year’s Championships has brought some revolution to this “old tradition” as competitors from Costa Rica, South Africa, Turkey, Azerbaijan also won medals and Argentina, Armenia, Bahrain, Brazil, China and Mexico entered their champions to the finals. By this, Classic Bodybuilding has become fully international and intercontinental IFBB sport division.

Up to 168 cm category
2015 World Championships top two: Kikwan Seol (Korea) and Seyed Mirnoorollahi (Iran) were challenged by new stars: Edgar Castro (Costa Rica), Wang Wei (China) and Ali Abmirasool (Bahrain) and had failed to regain their titles. Seol was running a close combat against Castro, especially in the semifinals, but Castro clearly won both final rounds and was, I think, the most sensational and most impressive winner of the first day! Marvelous body proportions, top definition and creative posing routine made him unbeatable. A real Costa Rican pearl!
Wang Wei (China) moved up from the 5th place in the semifinals to the 3rd position, pushing down Mirnoorollahi and Abmirasool to the 4th and 5th places respectively.

Up to 171 cm category
Also not easy category for last year’s stars: Fernando Gornals (Spain was nbot in his peak condition, enter the finals in the 6th opposition, later on managed to move to 3rd place. He Zhangming (China) dropped from 4th place to 6th position. Justin Tucker (South Africa) was a runner-up in 2013 and was a leader in the first two rounds but lost the gold medal in the routine round. Hyo Jung Kim is a new world champion. His previous best achievement was 5th place at the 2015 Asian Championships, so his progress is tremendous. His full, rounded muscles were scored higher than Tucker’s sharp definition and separation. Gornals moved two places up in this round also, grasping the bronze medal.

Up to 175 cm category
Nobody from the last year’s finalists. New Korean star Gun Woong Choi won the first two rounds with perfect scores and slightly lost the routine round to the European Championships runner-up Andrej Varga (Slovakia) but maintained the 1st place. Choi showed equally and symmetrically developed muscularity, with no weak points. Bronze medal to a new raising star from Turkey Memmet Armatcu, then new star from Mexico Antonio Arguelles and the next South American star Julián Paredes of Argentina.

Up to 180 cm category
Top two from the 2014 World Championships: Mohammad Ranipour (Iran) and Ali Emre (Azerbaijan) but completely different face of the battle: Ranipour didn’t enter the finals, finishing in the 10th place. Emre was very unfortunate last year, being tied with Ranipour in two rounds but losing the gold medal. This year is much more fortunate to him: he won the overall title at the historical first European Games in Baku and now got the World Championships’ gold medal and also the overall title. Having the European overall title from 2013, he is the most successful classic bodybuilder in the history! Congratulations!
His most demanding opponent was the European Championships runner-up Hubert Kulczynski (Poland), losing the battle for the gold medal against the future overall winner once again. Alexander Barbashin (Russia) was the 4th place winner in 2013, now moved-up one place and grasped the bronze medal in the finals, pushing down Antonio de la Torre (Spain) to the 4th position.

Over 180 cm category
Last year’s winner Andriy Kukharchuk (Ukraine) had to choose between classic bodybuilding and extreme bodybuilding this time, choosing the extreme version. From among the last year’s finalists the other two bodybuilders were in the line-up:
bronze medal winner Mateusz Kolkowski (Poland) and 4th place winner Kaveh Jazani (Azerbaijan). Kolkowski was in the 3rd place after the semifinals but then unexpectedly dropped to the 6th position in the finals. Jazani the opposite: moved up from the 6th place to the 3rd position. At the top two new Iranian stars: Ali Shamsghamar and Keyvan Rezapour. Shamsghamar took the 3rd place in up to 180 cm class at the recent Ben Weider Diamond Cup in Iran while Rezapour was 3rd in the tallest class over 180 cm. 2015 European champion Boris Orava (Czech Republic) in the 4th position and international newcomer from Poland Jacek Ratusznik in 5th place.