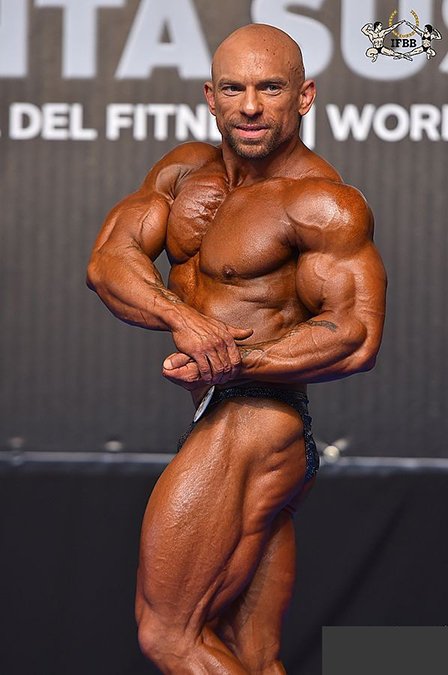 Bodybuilding up to 70: Bodybuilding categories will begin with strong accent as we will see on the stage legendary bodybuilder from Slovakia, six-time world champion and World Games winner Igor Kocis. He won his first European title in 2000 and word title in 2001. But at the previous European Championships Kocis lost to Roman Iushchenko (Ukraine), future world champion. Kocis turns 40 this year, becoming a master bodybuilder but looking into the list of 10 lightweight participants I can’t see any name who could challenge him. Maybe his team-mate Miroslav Skadra who was the bronze medal winner in 2014 but recent contests was not so successful for him (5th place in Santa Susana last year and 9th place at the 2016 Arnold USA). Then, last year’s top ten Sebastian Vasut (Romania) and Mediterranean Championships runner-up Alexandre Bozonnet (France).

Bodybuilding up to 75: 14 competitors from 12 countries. Among the last year’s silver medal winner Raigo Kuusnõmm (Estonia). It seems that his main opponents will be: 2015 Arnold Europe winner Maurizio Montaldo(Italy) and Spanish bodybuilder Carles Viñals who finished 4th at the 2015 Olympia Spain and at the 2014 Arnold Classic Europe. The rest are less-known challengers.

Bodybuilding up to 80: 21 competitors from 12 countries. No clear favorite. One meaningful comeback of the 2013 European champion (75 kg class) Jan Sotak (Slovakia). Now heavier and bigger but what will be his muscle quality? Then two bodybuilder who recently confirmed their top body condition: 2016 Arnold USA 2nd place winner Filippo Masucci (Italy) and 2016 Malta Grand Prix overall winner Rafael Beltran (Spain). Plus last year’s 5th place winner David Alexander (Ireland). And two finalists from 2014 European Championships: Charles Barbe (France) and Alberto Alonso (Spain) – in 85 kg. The winner will emerge from this melting pot, but who will it be?

Bodybuilding up to 85: 17 competitors from 10 countries. The next category where the elimination round will be needed. And very excited one as three former runner-ups will appear on the stage: Ott Kiivikas (Estonia), Krzysztof Skryplonek and Mariusz Balazinski (both of Poland). In 2014 Balazinski won over Skryplonek (Kiivikas placed 2nd in 90 kg class), in 2015 Skryplonek won over Kiivikas (Balazinski dropped to the 8th position). Skryplonek and Kiivikas met in a couple of regional contests held in March and April 2016. At all of them Kiivikas won over Skryplonek but Skryplonek’s body quality has been improving from contest to contest. Who will show harder and deeper separated muscles in Santa Susanna? Will Kiivikas managed to maintain top body conditions from previous contests? Will Skryplonek reach his peak condition in Santa Susanna? Will Balazinski be back in the game for top trophies (he won qualification open round in Poland)? Will some new star be born among other 14 bodybuilders?

Bodybuilding up to 90: 19 competitors from 12 countries. Some of them with very interesting sport career. Tomas Tabaciar (Slovakia) was the 2010 European Championships overall winner but in Classic Bodybuilding. In 2013 moved to the extreme version of the Iron Sport but his first success came in 2015, when he won the Olympia Amateur Prague (90 kg class). This is an evidence that he has finally reached peak condition in bodybuilding. Then, the next top competitor from Olympia: Sergey Rodin (Russia) who placed 2nd at the 2014 Olympia Amateur Moscow. And the 3rd renown champion: Hamit Görkem Gürsoy (Turkey), bronze medal winner (95 kg class) at the 2013 European Championships. Will they distribute medals among them or someone else will enter the game?

Bodybuilding up to 95: 12 competitors from 10 countries. Among them Roman Dudushkin (Russia) who is the only last year’s European open category champion who comes to regain the title. There will be the next 2015 European champion Manuel Cañadillas (Spain) who won masters category 40-49 , up to 90 kg. Then placed 2nd at 2015 Olympia Amateur Spain 90 kg open class, just behind famous Ahmed Ashkanani. Now a bit heavier and bigger, will be a very demanding challenger for Dudushkin. Who else can fight for medals? There are a couple of pretenders: 2013 European overall junior champion Marko Barić (Croatia), two-time European Championships classic bodybuilding bronze medal winner Oleg Kakorin (Russia) who will debut in extreme bodybuilding, 2014 European Championships 4th place winner Rabi Fahkro (Sweden) or former European masters overall champion Jakub Potocki (Poland).

Bodybuilding up to 100 kg: 16 competitors from 10 countries. It may happen that the main battle for the gold medal will be run among competitors who originally represented non-European countries: Djalma Laroque (Spain) and Reza Kakavand (Azerbaijan). Laroque won silver medal for Brazil at 2014 Arnold USA and won Arnold Brazil, while Kakavand won silver medals for Iran at 2012 Arnold Europe and Olympia Amateur Kuwait. Then, two competitors from the finals of the 2015 World Championships: 5th place winner Arne Lundell (Sweden) and 6th place finisher Gilberto Ciriello (Italy). The gap between them was 1 point only! Plus Pascal Chukwu (Netherlands) who won in a great style 2016 Loaded Cup in Germany few weeks ago. The battle will be tough!

Bodybuilding over 100 kg: 14 competitors from 10 countries. Among them two finalists from last year’s European Championships: silver medal winner Andrey Makeev (Russia) and 4th place finisher Matteo Innocenti (Italy). They will be fighting for the top trophy but will also have to win over two good competitors from 2016 Arnold USA: 6th place winner Andre Dufrasness (Belgium) and 7th place winner Andrea Presti (Italy). Then, former European classic bodybuilding champion Deividas Dubinas (Lithuania) and Adam Kozyra (Ukraine) who was very successful in other organizations but finished 14th at the 2015 IFBB World Championships and will try to move up in the final order.