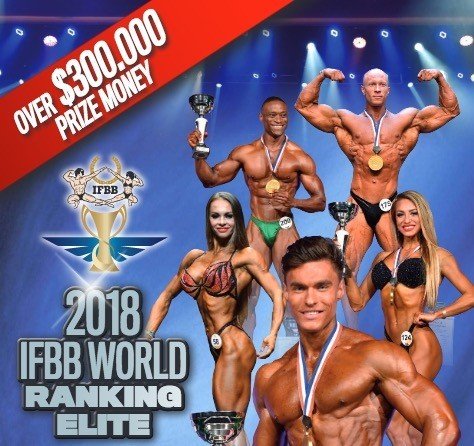 The 2018 IFBB World Ranking Elite system offers great incentives for the amateur athletes by rewarding them with prize money (Over $300,000) at the end of the competitive season. Another great initiative from the IFBB and IFBB President Dr. Rafael Santonja. 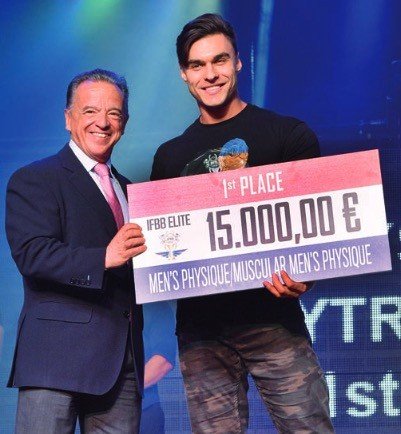 • Men’s Classic Bodybuilding
• Women’s Bikini-Fitness
• Men’s Physique
• Women’s Bodyfitness
• Men’s Bodybuilding
Four new categories added in 2018:
• Women’s Physique
• Men’s Fitness
• Women’s Fitness
• Wellness
This system offers a great challenge for the best amateur athletes in the world that will award more the $300,000 in cash prizes at the end of the season. The scoring of events will be spread across five continents.
This great project designed by IFBB President Santonja and his ExecutiveMembers, to make it even more attractive the extensive competition season, and rewarding the 10 best amateur athletes in the world, was an undeniable success in 2017 and, no doubt, can be a life changing moment for the athletes.
Competitors from the 5 continents saw how, besides the prestige of competing internationally according to the amateur spirit of passion for sport, their efforts and their physics were rewarded with cash prizes.
Some athletes experienced a life change beyond recognition: Natalia Lugovskikh received an offer for a TV show related to Fitness, Dmitro Horobets became a huge fan favorite in his country and Angelo Ronquillo started a family business. Three examples that speak for themselves.

In 2018, the World Ranking (WR) is still the same that works at the points and awards level, but grows to four new forms: the initial 5 of 2017 (Bodybuilding, Classic Bodybuilding, Men’s Physics, Bikini and Bodyfitness) and the newly incorporated categories, exactly as President Santonja announced at the WR Women’s Gala in Biarritz, last December.
TIE BREAK CRITERIA: 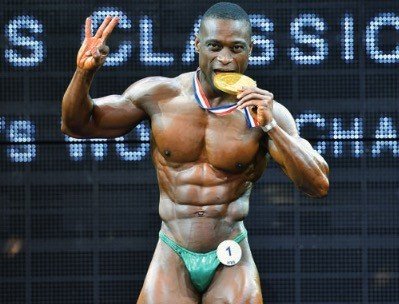 The 2017 season was exciting because many athletes had equal points in the WR and had the possibility of reaching the same prize and title.
The fans remember the struggle between Natalia Lugovskikh and Oksana Brygidyr, tied throughout the whole season, until the final. A situation that triggered the expectation about who would be the winner and forced to incorporate new tiebreaker criteria. Criteria for tie breaking and order in which they apply, for athletes with the same score:
1. The athlete with the best position in the World Championships will prevail.
2.If the tie persists, the athlete with the best position in his/her Continental Championship will prevail.
3. If the tie persists, the athlete who has achieved the best position, in any other event, with the largest number of participants in his/her category, will prevail.
SCORING EVENTS FOR WORLD RANKING
The growth of the WR series is in the second reason of its success. In 2017, it initially consisted of 16 scoring events.
Then two more were added; by 2018 there are 35 events included in the calendar. That means a growth of 120%
With a total of 28 countries hosting scoring events of the WR, Spain returns to the country most prominent, with 4 events. Due to the European and World Bodybuilding Championships held in Santa Susanna (Barcelona) and Benidorm (Alicante), in addition to the Arnold Classic Europe (Barcelona), and the great news that the 1st edition of the Spanish Diamond Cup is going to take place, in Madrid, 25th to May 27.
Check the updated contest calendar : https://www.ifbb.com/ifbb-board/
SCORE IN WORLD RANKING EVENTS
With some news regarding 2017, the IFBB continues to ponder the importance of the championships, according to their prestige and difficulty, in such a way that the most important events will be the World Championships; after this, the continental championships and, in third place, the rest of the circuit events.

In addition to this, a great new for the WR 2018 is that the Overall champions of each country will receive 1 extra point – once communicated by their National Federation; And the Overall continental champions will receive a bonus of 3 extra points and the Overall world champions, a bonus of 5.
Important news for this season! As in 2017, the decision that the last event of the WR is the most valuable and is a great success for the excitement and interest of the athletes. Last year, everything was at stake until the end and it was precisely the World Championships that were decisive, both for the victory and to enter the Top 10. 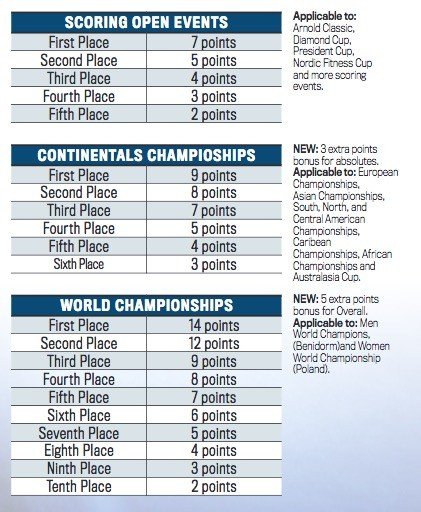 PRIZES:
With the increase of the 4 new categories included (Wellness, Women’s Physique, Men’s Fitness and Women’s Fitness), the amount of cash prizes that will be distributed among the 10 best athletes of the season amounts to more than $300,000, the prizes will be paid in euros (€), since the IFBB headquarters are in Europe. According to its greater participation of athletes, the modalities of Bodybuilding, Classic Bodybuilding, Men’s Physique and Bikini will distribute an amount of €43,750, each one; along with the € 25,000 that will be distributed in the bodyfitness category, plus the €15,000 for each of the new categories.
Criteria for individualized distribution of prizes: 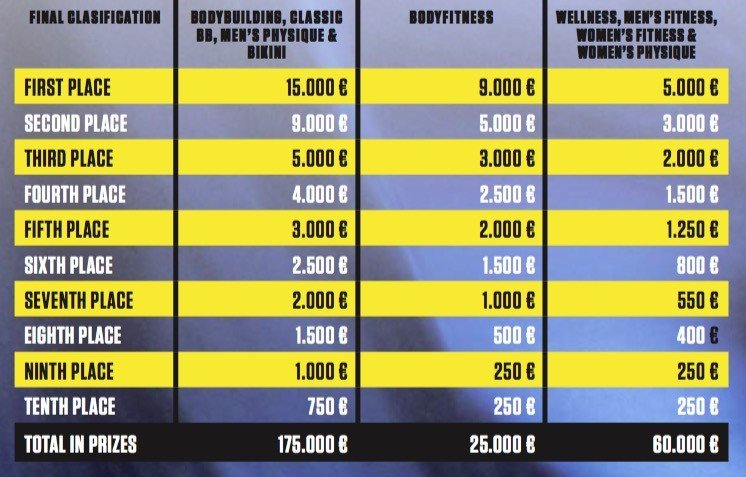 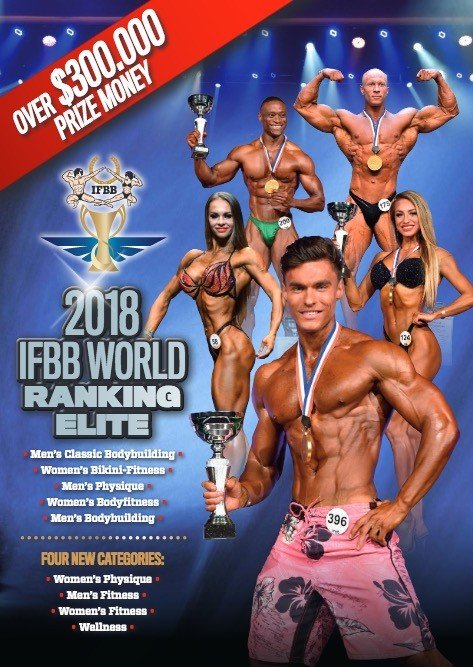