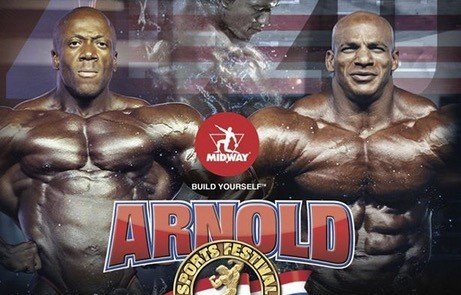 2018 Mr. Olympia Shawn Rhoden has given the biggest hint that he and Big Ramy will be competing at the 2020 Arnold Classic, Ohio.

A poster is making rounds all over social media with Shawn Rhoden and Big Ramy. The wording ‘They’re Back’ printed in bold just over their heads.

The official Instagram page and website of the Arnold Sports Festival still has not confirmed any competitors and as well have not displayed this poster.

If Rhoden and Ramy do compete, this will be their first appearance since the 2018 Mr. Olympia. Rhoden went on to win while Big Ramy placed a disappointing sixth place.

If this is the sign of things to come, the 2020 Arnold Classic, Ohio will be one of the biggest contests in recent times. Fans are already commenting that this could actually be bigger than the Mr. Olympia.

As the Arnold Classic, Ohio is a great indication of what is to expect for 2020, the Mr. Olympia will not disappoint.