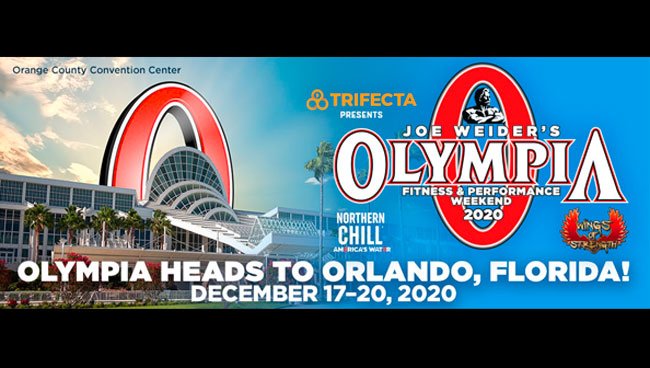 Olympia President, Dan Solomon put rumors to rest yesterday evening to make the official announcement that the 2020 Olympia Weekend will be moved to a new location.

The 2020 Olympia Weekend will now be taking place on 17-20 December, 2020 at the Orange County Convention Center, located in the heart of Orlando, Florida.

Speaking to Evolutionofbodybuilding.net, Dan Solomon said “What usually takes over seven months to plan, we are now doing it in four weeks.”

Dan is determined to make sure the fans and most importantly the athlete are not let down, even during the Covid-19 crisis.

Evolutionofbodybuilding.net was informed about the move by very close sources before the official announcement was made, but agreed not to publish any details before the news was made official by Dan and his team.

On the plus side, more spectators will be able to view the event.

What may seem as a logistics nightmare, the situation looks to be already under control thanks to the Dan Solomon, Olympia Owner Jake Wood and the rest of the team.

In the last couple of months, a number of high profile competitions have been moved to Florida and other locations.

The New York Pro was moved to Florida while the Chicago Pro took place in Atlanta.

Florida seems to have very little Covid-19 restrictions compared to other American states.

At the end of the day, the Olympia Weekend organizers managed to find a location that can cater to more spectators viewing the event.

Another important fact to consider is that with Tim Gardner part of the Olympia Weekend team of organizers, he knows Florida very well, organizing a number of competitions in the area.

Capping off one of the most challenging years in recent history, the fitness industry’s most prestigious event has announced a move aimed at protecting the interests of fans who are planning to attend Olympia Weekend. Recent announcements by the Nevada Governor have forced Las Vegas to invoke increased crowd restrictions limiting audiences to only 250 spectators, forcing most ticket holders to stay home. In an effort to protect the interests of the fans and the hard work of the athletes, Olympia Weekend will instead be held in Central Florida at the Orange County Convention Center, located in the heart of Orlando.

Olympia President Dan Solomon explains, “These have been incredibly challenging circumstances, but we’ve remained focused on making sure the best athletes in the world have the opportunity to compete in front of their fans. The news out of Las Vegas in recent days has become highly concerning. We will not risk the possibility of being forced to cancel the Olympia, so we are grateful to the city of Orlando for welcoming us, while providing a safe and expansive home for all phases of the event.”

Extraordinary times call for extraordinary solutions. With one of the most impressive lineups in decades, organizers have remained focused on delivering a true Olympia experience to fans, athletes, sponsors and exhibitors. New owner Jake Wood adds, “These are challenging times, but we owe it to the entire industry to do whatever it takes to create a safe and exciting weekend. As part of our commitment to these elite athletes, we will also be giving away record prize money.”

In the wake of the pandemic, most airlines are currently offering flexibility and waiving change fees for travelers looking to modify their plans. For additional convenience, all hotel reservations in the Olympia block at Planet Hollywood will be automatically cancelled without penalty.

Important notice to existing ticket holders: If you’re a VIP Ticket holder, no action is required. Your VIP package will be available for pick up in Orlando at the designated pick-up location. — If you’ve purchased individual tickets using Ticketmaster, your purchase will be automatically cancelled by ticketmaster and refunded to your credit card. You will be able to purchase Orlando tickets soon at MrOlympia.com.

Regarded as one of the world’s most celebrated event venues, the Orange County Convention Center is connected to the beautiful Hyatt Regency Orlando. Despite the change in location, all elements of Olympia Weekend remain exactly as they were previously scheduled, including the Amateur Olympia event. A special discounted room rate has been set up at the Hyatt. Visit MrOlympia.com

IFBB Professional League President Jim Manion shares, “I am incredibly proud of everything the Olympia team is doing as we work to end the year on a high note. This new location is a tremendous opportunity to make sure the Olympia tradition continues here in 2020. Looking forward to seeing everyone in Orlando.”

as Trifecta presents Joe Weider’s Olympia Fitness & Performance Weekend brought to you by Northern Chill and by Wings of Strength the weekend of December 17-20. 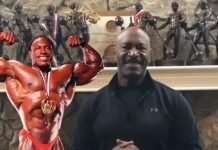