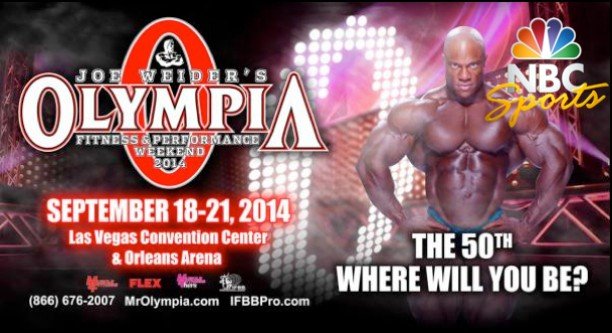 “We are pleased to partner with NBC Sports Group to bring the excitement of the 2014 Mr. Olympia, and all of the events of Olympia Weekend, to a national television audience,” said AMI Chairman, President, and CEO David J. Pecker. “The Olympia Weekend is an extraordinary event that underscores the passion and commitment that every competitor brings to the stage, and the exhilaration of the more than forty thousand spectators that will attend this year’s event.”

The partnership brings the Mr. Olympia back to TV for the first time since 1984 when Lee Haney won his first of eight titles. NBCSN will televise two 90-minute specials around the event, the first on October 18 at 1:30 p.m. ET and the second on October 25 at 5:30 pm ET.

Each telecast will highlight various aspects of the Mr. Olympia competition, featuring some of the sport’s biggest stars including Kai Greene, Dennis Wolf, Branch Warren, and Mamdouh “Big Ramy” Elssbiay as they attempt to wrest the coveted title from defending champion Phil Heath. One of the most notable winners of the contest was a young Austrian bodybuilder named Arnold Schwarzenegger who was named Mr. Olympia in 1970 at 23 years-old. Schwarzenegger was the youngest competitor to claim the title, and went on to win seven titles in total (1970-1975, 1980).

“It is a great opportunity to have this year’s Olympia Weekend broadcast on NBCSN, exposing the sport to an even broader audience who will see what bodybuilding and fitness are all about and getting an up-close view of the larger-than-life personalities,” said Jim Manion IFBB Professional League President. “Not only will this help raise the sport to new heights by showcasing the hard work and passion of today’s superstars like reigning and three-time Mr. Olympia Phil Heath, number one challenger Kai Greene, Dennis Wolf, and Shawn Rhoden, it may even inspire a future Mr. Olympia.”

In addition to crowning Mr. Olympia, the telecasts will also showcase how the Mr. Olympia competition has grown from its humble beginnings in 1965 into a four-day exposition featuring the Fitness, Figure, and Bikini Olympia contests, men’s and women’s physique contests, and several other activities and events. Last year, more than 40,000 people passed through the doors for The Mr. Olympia Fitness and Performance Weekend.

The 2014 Mr. Olympia Fitness and Performance weekend takes place September 18-21 at the Orleans Arena in Las Vegas, NV. Tickets are available now at mrolympia.com or by calling 888-234-2334.

For Listings and the NBCSN Channel Finder, visit http://www.nbcsports.com/tv-listings.