In recent days news of the split between the IFBB Brazil and the main promoter of the Arnold Classic Brazil (South America) has making its rounds on social media.

Many supporters of the IFBB Pro League having been celebrating as this was some type of victory over the IFBB.

But the real fact is that the IFBB put their athletes first and when the IFBB Brazil witnessed a situation was not working as it should be, they decided to cut ties with the promoters Savaget.

This is the official press release by the IFBB:

COMMUNICATION WITH REFERENCE TO THE ARNOLD CLASSIC BRASIL:

IFBB fully supports the decision adopted by the Brazilian Confederation of Bodybuilding and Fitness (IFBB Brazil), suspending partnership with the promoter of Arnold Sports Festival in Brasil, the company Savaget.

IFBB strongly believe in teamwork, welcoming promotors in a relation of mutual respect, working in harmony for the development of sport, without interference in each others area, what unfortunately was not the case in Brazil.

IFBB supports the Arnold Sports Festival organization in Europe and Africa, and, with due respect to promotor decision, declares that it’s very sorry to see how the Festival is working in other areas with a private company that doesn’t respect the International Sports Regulations and its Structures.

OFFICIAL STATEMENT OF THE IFBB BRAZIL

The Brazilian Confederation of Bodybuilding & Fitness (IFBB Brazil), communicates with sadness that it has broken the partnership with the company Savaget, organizer of the Arnold Classic Brazil, for the next events including the 2019 edition.

This though decision was taken because of the way Savaget was conducting, in the last months, the negotiations with one company from the Nutrition area, which will be their main sponsor in the Expo, making it very clear that the business and the financial and commercial interests of both companies were well above the interests for the development and valorization of our sport and our athletes.

IFBB Brazil does not condone but admits the idea of being controlled by financial and commercial interests in detriment of the sport is not the right atmosphere.

We will continue stronger than ever, valorizing the sport and avoiding all types of unacceptable intervention by any private company in detriment of the fair and ethic judgment of the athletes, commercial benefits in change of financial benefits or any other type of action which can compromise the integrity and valorization of the Sport and specially our athletes. 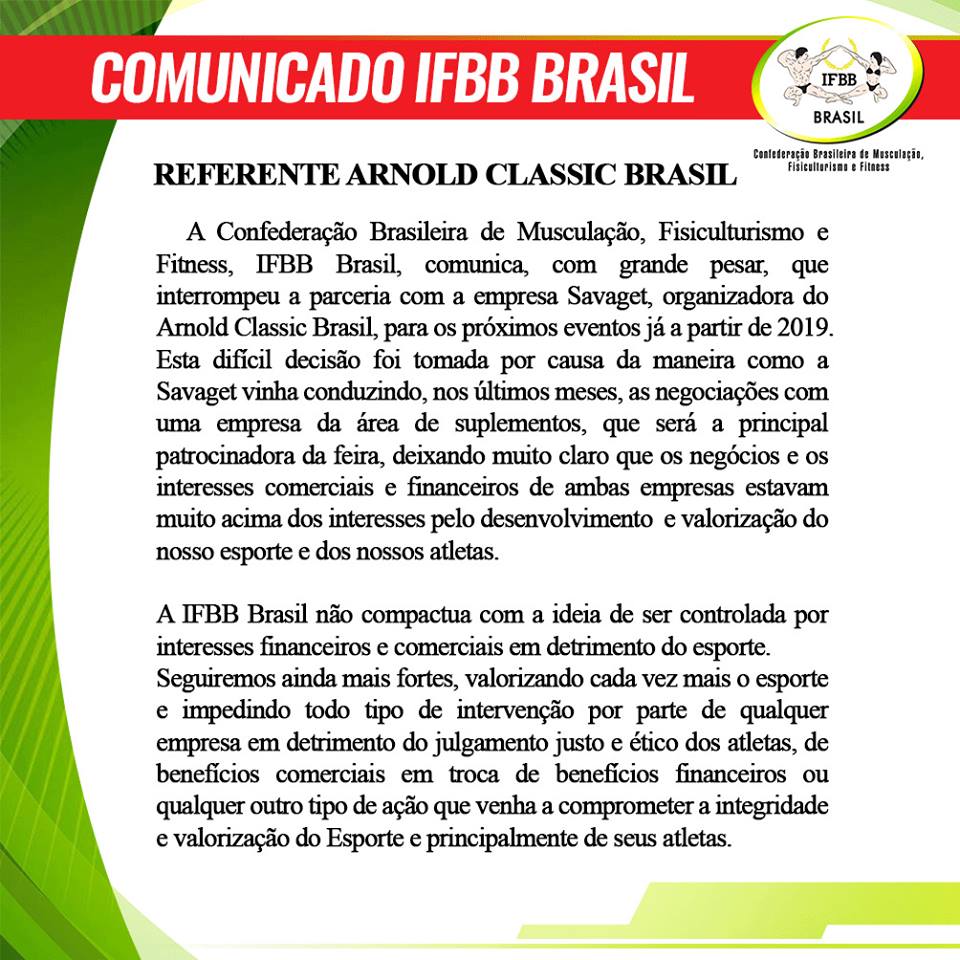