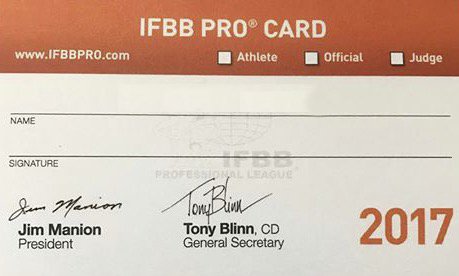 In the past couple of weeks, big changes have occurred in the bodybuilding world if you compete in the IFBB.

If you have not heard, the NPC/IFBB Pro League and the IFBB International/IFBB Elite Pro have split.

Now, the amateur athlete has a choice, either stay with NPC or stay with the IFBB International, or switch over.

Since only a month a go, an athlete would have to go through a process of climbing up the ladder to win the once prestigious IFBB Pro card.

In the USA, you will need to place in the top three of an NPC National Qualifier bodybuilding show. These shows are there to help separate those who are qualified to move up from those who are not.

Essentially, NPC shows are the ones for amateur bodybuilders who think they are ready to compete. In order to obtain a pro card from an NPC Qualifier, you need to finish in the top tier to qualify for certain higher-up competitions. A top 5 finish will qualify you for the North American Championship, along with a few other competitions. A top 3 finish in a national qualifier will allow you to enter into the USA and National competitions. (Please take note this was taken from www.npcwestcoast.com, so it is legit)

In Europe or other parts of the world when the IFBB International used to be the feeder of athletes for the IFBB Pro League, and athlete would go through a similar process.

An athlete would win his national competition and sometimes become a pro if the option is there, or they then qualify for the Arnold Classic Amateur, European championships or World Championships to try to win their pro card. As well the Ben Weider Diamond Cup is a series of competitions that enable you to win an IFBB Pro card as well (this has now changed to the IFBB Elite Pro card since the split)

Getting back to the IFBB Pro League that now only has the NPC as a feeder of athletes, you can see the athlete mainly in the USA wins the IFBB Pro card by qualifying to compete in the national level, then going on to the USA or North American Championships to win the Pro card. Everything step by step and it can take years. In the meantime the athlete matures and builds a physique to compete with the best when he or she is a pro.

Now with the NPC organizing shows in the UK in 2018, the new saying is ‘You win and your in‘,  it’s as simple as that. Any amateur can register, compete at an amateur level of the NPC on for example Saturday, win the overall, become a pro and compete on Sunday as a pro, win and qualify for the Olympia… All in two days… WOW!!

If you think this is impossible, it happened in Kuwait a couple of weeks ago. A physique competitor won the overall show in the amateur category, he became a pro and on Sunday he won the overall pro category to earn his ticket to the Olympia. His name is Abdullah Al Saeef from Kuwait. This kid arrived as a amateur and finished as a Olympia athlete. That was easy!!

So when the Americans watch the press conference that Bob Cicherillo did in the UK a couple of weeks ago and hear how easy it is to become a IFBB Pro out of the USA… they should be a bit disappointed. They have a much hard process to obtain that IFBB Pro card, while in Europe and other parts of the world it can now be done in a weekend, with the new structure the NPC is planning.

Bob Cicherillo also said that anybody can compete in the NPC shows that will be held in the UK. Basically he said if you are a ‘human’ you can qualify to compete. So is the door open for an American to take a flight over and try to earn their IFBB Pro card for the UK, than rather go through the process of winning a pro card as we mentioned at the beginning of this article?

Why are the NPC making it so easy for the Europeans and other countries to obtain the once prestigious IFBB Pro Card? Are they desperate for athletes?

Removing a process for athletes to climb up a latter and earn a pro card, regardless of the federation, just makes it worthless. Handing them out like candy, brings the level down drastically. Bob Cicherillo knows himself how long it took him to win that IFBB Pro card and till today it is still gold for him, as he had to work hard for it. He had to compete against the best in the world at the time.

If I am mistaken in this article, please feel free to correct me by sending an email to evolutionofbodybuilding@gmail.com.

But as it seems, the Europeans and other nations other than the USA have the better deal when it comes to winning a IFBB Pro card. In the meantime the IFBB International is getting stronger as each day goes by with more competitions being organized.