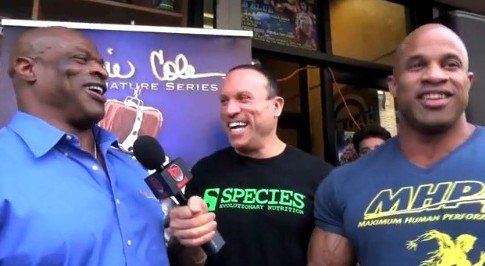 8X Mr. Olympia Ronnie Coleman and Victor Martinez made an appearance at the 2015 Natural Vitamins Monster Event in New York. Dave Palumbo of RXMuscle.com was there to ask them a couple of questions.

First in line was Victor Martinez. Obviously, Dave asked if he would need to redeem himself after the 2015 New York Pro defeat… but Victor immediately replied, “redeem what?”.

Then it was Ronnie Coleman’s turn to take some questions.

Victor ended by saying that it is always an honour to compete in the Arnold Classic as they take care of the athletes very well.

The subject remained on Big Ramy, and Ronnie Coleman predicted he will be the future Mr. Olympia. When asked what is keeping him from winning it, Coleman immediately replied “symmetry”.

Coleman continued by saying that it took him about eight years to nail it and eventually Big Ramy will do it as well as he has the size to defeat anybody and it is “obvious” that he will eventually win.

Asked about the sport of the situation regarding the sport of bodybuilding, Coleman commented that the sport is still getting stronger and more popular.

Coleman then was asked why a person with his popularity would go to such a small event, Coleman immediately replied that he will never forget the fans as they are the people that made him what he is today.