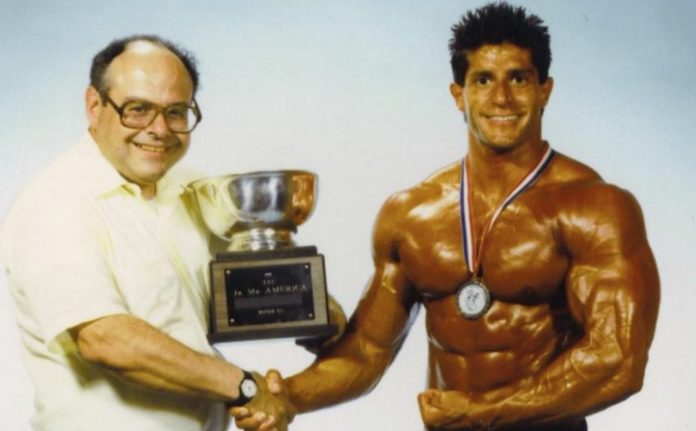 Earlier this week, legendary bodybuilder Milos Sarcev revealed the news that his lifelong mentor/coach passed away at the age of 67 after battling a long illness.

Just two days later, another legendary coach/trainer Bob Gruskin passed away at the age of 83.

Bob Gruskin was a mentor to numerous bodybuilding and fitness stars during his life.

Bob was also very involved with NABBA, preparing athletes to represent the USA at international competitions.

One prominent figure in the bodybuilding industry that credits Bob to all his success and knowledge of the sport is Chris Aceto.

Chris has guided hundreds of athletes in the industry with the majority of them turning pro and also winning the prestigious Mr. Olympia titles (Jay Cutler, Shawn Rhoden and Kamal Elgargni).

Immediately after hearing of Bob’s passing, Chris published a message on his official Instagram page revealing how close Bob was to him.

“Everything I Know I either learned from Bon Gruskin, borrowed from Bob Gruskin or as I always told him, “ stole it from You Bob! “Bob was my coach and mentor and he recently passed away. He was a genius is so many ways and a humanitarian.”

“Today Dave Palumbo pulled together myself, Matt Dufresne, Jeff King, Jerry Scalisi and John Defendis to celebrate his life and legacy. Unfortunately, there are hundreds of successful bodybuilders who could not appear on the show today many of whom won major titles. When the show is up on Rxmuscle YouTube station, I will post the link.” – Chris Aceto.

On April 14th the world of bodybuilding lost our very good friend in Bob Gruskin. All that I have heard is that he had a very high fever. He was 83 years old. One can surmise that it could have been COVID-19.
He was one of the best coaches or gurus of bodybuilding from the last 40 years. What is not so well known is that he was also a wonderful bodybuilding photographer.

At the NABBA Worlds in Aberdeen, Scotland in 2003, I spent quite a bit of time with Bob, shared taxis with him, and hung out. He supplied me with 73 photos (prints) from the contest for the DVD covers for the contest. I will make a memorial gallery on our GMV Facebook PHOTOS to share with you these wonderful 2003 photos. A small tribute to his photography skills.

Bob was the head of NABBA USA for many years until health issues caused him about 10 years ago to cut back on these activities and reduce his international travel to events in Europe.

I knew Bob since the 1987 NABBA Universe where he brought the USA team to London for the annual Universe competition. 2 days after the contest he brought two of his stars in JERRY SCALESSE and Junior champion JOE DeANGELIS to my London studio for video and photos. It’s hard to believe that was 33 years ago.

Bob’s incredible USA Universe team in 1987 was as follows:
JERRY SCALESSE, JOE DeANGELIS, LARRY BERNSTEIN, STEVEN STRUNK, JOE MEEKO and PETE MOEN. Scalesse and Strunk each won their Amateur Universe class. One week later Joe DeAngelis won the Junior title at the NABBA Worlds in Belgium.
In the 1987 WOMEN’S PHYSIQUE CLASS it was 1st and second for USA with CONNIE McCLOSKEY 1st, followed by MARY HOVEY-WALK.
In the Professional Universe Bob’s competitors from USA were JEFF KING who placed 2nd to Olev Annus, RUFUS HOWARD and BOB REIS.

At the 1988 NABBA Amateur Universe, Bob’s team was as follows with Casey and Victor winning their classes and Victor winning Overall:
CASEY KUCHARYK, VICTOR TERRA, PETE MOEN, PETER KUTSUGERAS, and SHANNON MONROE in the Junior Class. KARLA NELSEN competed in Women’s Physique. I had studio shoots with many of Bob’s USA team in these Golden Years.

Although USA still had a strong presence at the NABBA Universe the large USA teams had peaked by the late 1980s. However in 1991 Bob had more success with Men’s Class 1 winner in Joe De Angelis and the Professional Mr. Universe title going to Victor Terra .

In 1992 Bob’s Tall Class 1 winner was Mick Souza.
In 1993 USA’s Women’s Physique Winner in Tall Class 1 was Millie Carter Gruninger.
In 1994 Bob produced 3 more champions at the Universe. They were CLASS 2 – MEDIUM TALL Amateur Men with Ted Lopes 1st and the great Dennis James 2nd. Dennis went on to have a most successful career as a top IFBB Professional.
In the MISS PHYSIQUE CLASS 2, Cathy Butler-Corish was the winner representing team USA.

In 1995 Universe CLASS 2 MEDIUM-TALL it was first place to Dennis James. In the women’s division, it was MS. PHYSIQUE CLASS 2 & OVERALL winner in Cathy Butler-Corish. Another Overall Title for Bob and USA.
In 1997 it was MR CLASS 4 winner Frank Vassil of USA.

It was then quite a gap till 2010 when the MASTERS OVER 50 winner was USA’s Hugh Ross. That was the last Universe title for Bob’s Team USA.

It was in 1983 that Bob Gruskin brought NABBA to USA and became the President for his country. This was after attended his first NABBA Universe that year and mentoring Jeff King to his victory.

Bob Gruskin was friend, guru and manager to one of the most successful overseas teams ever in the history of the NABBA Universe. Bob also trained many AAU Mr America winners, such as 1987 AAU Overall Mr. America winner Richard Barretta, pictured receiving his trophy from Bob.

RIP Bob, you will be greatly missed and never forgotten. – Si Sweeney

Everything I Know I either learned from Bon Gruskin, borrowed from Bob Gruskin or as I always told him, “ stole it from You Bob! “Bob was my coach and mentor and he recently passed away. He was a genius is so many ways and a humanitarian. Today Dave Palumbo pulled together myself, Matt Dufresne, Jeff King, Jerry Scalisi and John Defendis to celebrate his life and legacy. Unfortunately, there are hundreds of successful bodybuilders who could not appear on the show today many of whom won major titles. When the show is up on Rxmuscle YouTube station, I will post the link. 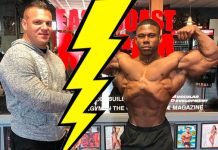 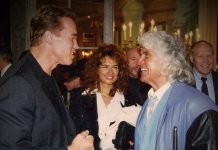