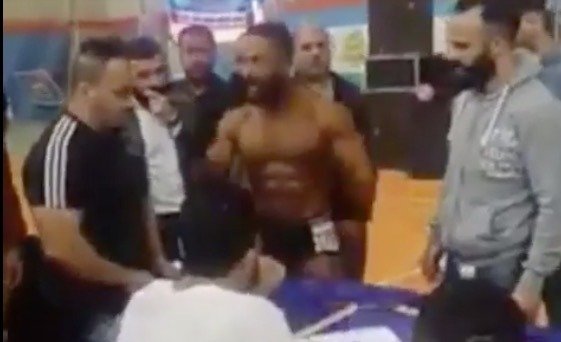 The bodybuilding and fitness is full of excitement and sometimes situations hit a new level, especially when it comes to tempers.

A video has emerged of a bodybuilder from Egypt who was caught on film smashing and flipping a judges table at a recent competition that took place on 6 April, 2019.

According to our sources, the competition is not affiliated to any organization and was organized by a gym.

When the competition finished, the bodybuilder, Mohamed Elgendy found out his result was cancelled.

The reason for this was that the organizer wanted competitors to have no competition history and compete for the first time. Apparently the athlete who smashed the table competed before and was not happy with this decision.

The athlete seemed to be distraught and had to be consoled after the incident.

Mohamed Elgendy contacted us and explained he paid a lot of money to enter this contest and when he competed he was disqualified.
Mohamed continued to explain that the promoter agreed he can compete and then changed his mind when he arrived.
Mohamed said he has nothing against the judges but his problem is with the promoter and in the video we was arguing with the promoter himself.

On Sunday, 7 April 2019, the athlete went to Instagram to apologize for his actions.