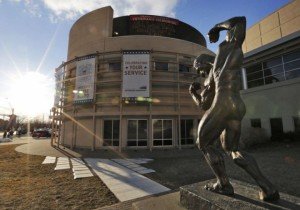 Branch Warren’s massive tanned and oiled shoulders brush the black curtains as his bare feet trace a narrow path towards the backstage.

A two-time winner of the Arnold Classic, he stalks onstage to thundering applause. The perfectly aimed blue and white lights catch his glistening, flexing muscles.

The banked seating and acoustics in the Veterans Memorial auditorium create an atmosphere that belies its more than 3,900 seats. When a fan shouts a competitor’s name, it carries as clearly as if it were whispered in his ear. It is intimate here, close, even during the amped-up three hours that make up one of the most-coveted and respected events in professional bodybuilding.

And for just an extra moment last night, Warren savored it all. The building is set for demolition this year.

For Warren, who made his eighth appearance at the Arnold Classic last night and finished sixth, this auditorium is a special place. Reputations were built here. Careers launched. Legends made.

For competitive bodybuilders, this is their Madison Square Garden, their Lambeau Field. Mecca.

Arnold Schwarzenegger was crowned Mr. World on this stage in 1970 and calls it the most-important win of his career. In every year since, bodybuilders gunning for equal fame have posed upon the same platform.

“You don’t get to be a bodybuilder by accident. You learn the history of the greats. And this spot is where all my idols got their start,” said Warren, of Copper Canyon, Texas. “My childhood dream came true in this building on this stage. It’s always been the most-special place for me. This weekend is the end of an era.”

The Columbus Downtown Development Corp. will raze the building to make way for a modern structure that will be the Ohio Veterans Memorial and Museum. A multiyear plan is to reinvent the area on the west bank of the Scioto River into an educational and cultural district.

Next year, the Arnold Classic will move to Battelle Hall in the Greater Columbus Convention Center. The other competitions held at Veterans during the Arnold Sports Festival also will move, and some events will shift to the Ohio Expo Center.

The 8-foot-tall, 600-pound bronze statue of Schwarzenegger in front of Veterans will go to the Convention Center.

Local businessman and sports promoter Jim Lorimer brought Schwarzenegger, then a relatively unknown Austrian bodybuilder, to compete at Veterans Memorial in 1970. After years of sports ventures and other bodybuilding events, the two partnered to create the Arnold Classic in 1989.

The Arnold athletes come from around the world, so most didn’t know until they arrived that this would be the last at Veterans. Lorimer told them during a competitors’ meeting on Thursday night.

“You will be a part of history in a different way this weekend. You will be the last Arnold Classic competitors to cross that stage,” he said. He called the county’s decision to tear down the building political and said, “We did not agree with it. But we move on.”

During a break in last night’s action, longtime announcer Clint Richards said the love for Veterans runs deep and told the crowd, “You’ll always be able to say I was there when history was made.”

Then, the house lights came up and he called the Veterans Memorial employees on stage to a standing ovation to thank them for their dedication to the Arnold over the years.

After congratulating Friday night’s winners, Schwarzenegger sat down in a time-worn backstage dressing room to wax philosophic about his affinity for the venue.

He said it has become so important to bodybuilders because of longevity. Events such as Mr. Olympia have moved around. And the auditorium’s size and design are tailor-made for a sport that relies on everyone being able to see the twitching muscles and snakelike veins of a sculpted human body in motion.

Still, as an athlete, he looks forward, not back. And that’s how he views the demolition of Veterans: “It’s like a crop. When you cut it down, a new crop grows in its place. A bigger and better crop.”

Toney Freeman, of Canton, Ga., competed last night in his ninth Arnold Classic and said it was a moment to savor.

Legions of young bodybuilders — he among them — first came here as spectators to soak in the lore and see their mentors. For many young athletes, he said, Veterans Memorial is where they drew inspiration, motivation, hope.

“Our sport, our culture, is losing a huge chunk of its history,” Freeman said. “It’s emotional for all of us.”

Schwarzenegger said he’ll miss the building but that it will hold a special place in his heart.

“I will always have my memories,” he said. “No one can take them.”