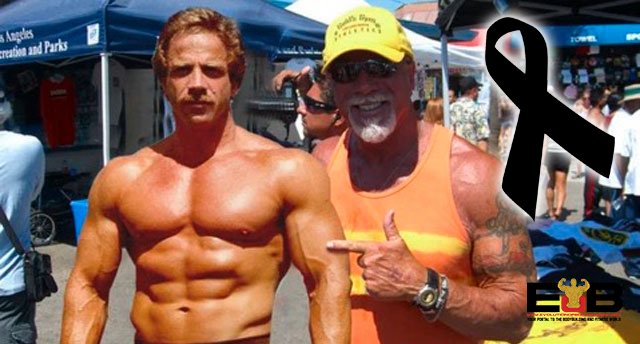 We start the week with the shocking news about the passing of bodybuilding historian and wrestler Ric Drasin.

It was just last week that Ric went to his social media to say that he was doing fine and was looking forward to being home with his family.

Evolutionofbodybuilding.net reported last week that Ric was facing some complicated matters after he revealed he was having some kidney problems.

Drasin explained that he has been suffering from extreme pain in his knee on his official social media pages.

To add to his complications, Ric had said he is having his kidney’s checked as he is holding a large amount of water. This is usually a sign something is unfortunately not right.

“I just wanted to let all of you know and I’m still in the hospital but I’m better than I was and I still have a ways to go I’m seeing my doctor today and then Wednesday I’m getting my knee aspirated to prepare for surgery on September 15 I can’t walk so I’m gonna be here all the time plus my kidney is being tested to see why am holding water and try to get that in order when everything comes together I should be fine again I can’t wait I don’t wanna be here anymore I Want to be home with all my things thanks for being good friends love you all.” – Ric Drasin

This is Sami and Adam, and Shane. It is with great sadness and a heavy heart that we have to announce the passing of our father. He was everything to us. A father, role model, and friend. Not only was he an inspiration for countless people, but he truly cared for those around him. His life was steered by the desire to uplift and share his positivity. He always found a way to brighten the room with his humor. Ric’s immeasurable presence will be with us all forever.

With a very popular YouTube show called ‘Ric’s Corner‘, Ric has practically interviewed every legend in the sport of bodybuilding. He has an extensive collection of great interviews on his YouTube page.

We are honored to have had to collaborate with Ric on various episodes from his show Ric’s Corner. One edition was with bodybuilding legend Steve Reeves.

Being a former training partner to 7X Mr. Olympia Arnold Schwarzenegger, Ric has been around the best of the best during the Golden Era of bodybuilding.

The very famous Gold’ Gym muscleman logo and World’s Gym gorilla logo were also created by Ric Drasin and till today, a one of a kind drawing can be ordered and signed by Drasin himself.

Ric has also featured on the popular series ‘The Incredible Hulk’ playing the ‘Demi’ Hulk.

You can find out more about Ric’s fantastic life and career by logging on to www.ricdrasin.com.

Richard Alan Drasin, who was born on July 12, 1944, got his start in wrestling when he joined Johnnie Mae Young’s wrestling school at the Olympic Auditorium in Los Angeles in 1965. After training at Young’s school for six months, Drasin made his in-ring debut later that year, facing Buddy “Killer” Austin.

After debuting, Drasin regularly worked in the California territory but also wrestled in places such as Hawaii and the Pacific Northwest. In 1975, Drasin created West Coast Wrestling Promotions, which lead to opposition by the NWA and only lasted for a few shows.

In the 1980s, he wrestled several matches for the WWF when they ran in Los Angeles. In the 1990s, Drasin created his own wrestling school and started the American Wrestling Federation, which held shows in the Los Angeles and Bakersfield area from 1996 until 2001. Even after the promotion ceased, he continued to operate the school out of his house. Two of the notable students who trained there are AEW’s Jungle Boy andLuchasaurus. Drasin’s son Shane, a popular Southern California wrestler called Shane 54 was also trained by Drasin.

Drasin began working in film in 1972, playing a gym manager who was attacked by rats in the horror movie Ben. He also played the demi-Hulk in the TV series The Incredible Hulk. IMDB.com lists 29 acting credits for Drasin.

In the bodybuilding world, Drasin was also an important figure. He was the former training partner of Arnold Schwarzenegger and the artist that designed the famous Gold’s gym logo and World Gym Gorilla. In October 2012, Drasin was awarded the Joe Gold Lifetime Achievement Award at the World Gym convention in Las Vegas, NV. He is the only person to date to receive the award for their contributions to bodybuilding.

In 2004, Drasin co-wrote the book So, You Want to Be a Wrestling Promoter, with Bruce Dwight Collins, and published his own autobiography called The Time of My Life in 2016. He also wrote articles for various magazines and websites, including a regular column for SoCalUncensored.com in the early 2000s.

Evolutionofbodybuilding.net send our deepest condolences to Ric’s family and friends during these difficult times.

This is Sami, Adam, and Shane. It is with great sadness and a heavy heart that we have to announce the passing of our…

Evolutionofbodybuilding.net collaborated with Ric Drasin on a number of his shows.

Updates from Ric and his son just days before his passing