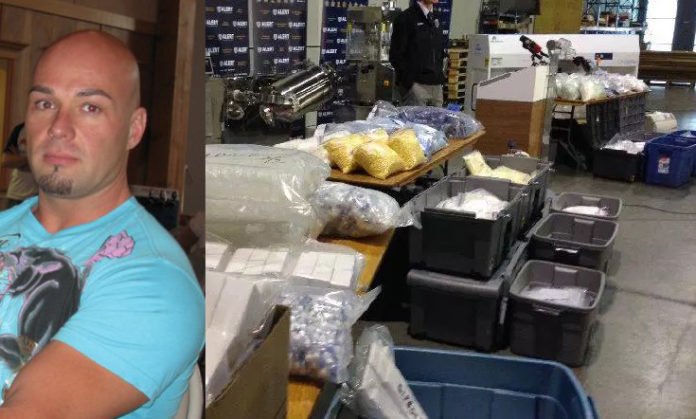 Krik Goodkey, the former Head Judge for the Alberta Bodybuilding Association (ABBA), was sentenced to two years imprisonment and order to pay a $75,000 fine by Court of Queen’s Bench Justice Sterling Sanderman on June 21, 2019 according to sources. Goodkey was busted as one of the largest steroid dealers in the history of Canadian law enforcement in 2014.

Goodkey pleaded guilty to production of anabolic steroids and proceeds of crime (money laundering) in October 2018.

Goodkey operated a “highly sophisticated underground steroid manufacturing and distribution operation” in the garage and den of his north Edmonton home. The home served as the headquarters for the underground labs (UGLs) known as USP Labs and Ikonic Pharma.

In October 2018, Goodkey pleaded guilty to producing anabolic steroids and laundering proceeds of crime in connection with a September 2014 drug bust by the Alberta Law Enforcement Response Team.

The roughly $9.3-million bust included more than 360,000 pills, 10,000 vials and more than three dozen types of chemicals. At the time, police said it was the largest seizure of its kind in Canada.

The lengthy investigation came to a head on Sept. 25, 2014, when officers raided two storage lockers in Edmonton and three homes. They found about 100 barrels of chemicals in one of the lockers.

One of the homes – located in northeast Edmonton – had a steroids manufacturing lab valued at roughly $100,000, police said at the time.

Investigators believed the drugs were also being distributed across the country, with some shipments going all the way to St. John’s, N.L.

On Friday, Goodkey apologized to the court for his actions. He said he hopes to take advantage of programs while he is incarcerated. He said he got married two years ago and hopes to take his life in a different direction.

When finalizing a decision, the judge looked at mitigating factors including his guilty plea, relationship and that he has been able to maintain work while awaiting sentencing.

Goodkey has given his defence lawyer $12,000 in trust to put towards his fine. The judge extended repayment from 18 months to five years.

The judge recommended Goodkey be put in minimum security at the Drumheller Institution.

Strong ties to the bodybuilding world as a competitor and judge.

Goodkey became an ABBA judge following his retirement from competition in 2006. He quickly moved up the ranks to a position of Head Judge.

Goodkey used his position as a Head Judge to promote the sale of USP Labs and Ikonic Pharma steroid products to bodybuilding competitors.

IFBB President Dr. Rafael Santonja does not tolerate these actions from IFBB members.

Evolutionofbodybuilding.net contacted IFBB President Dr. Rafael Santonja regarding this incident and he was consistent with IFBB’s strict policy on its members when it comes to doping.

“The position of IFBB in regards to doping is very strict. If an athlete or official is in breach of the anti-doping rules, disciplinary actions will be taken.”

Watch below: A man at the centre of one of Canada’s largest illegal steroid seizures is heading to prison. Sarah Komadina has the details.

Watch below: A video released by ALERT in 2014 shows the record haul made by officers