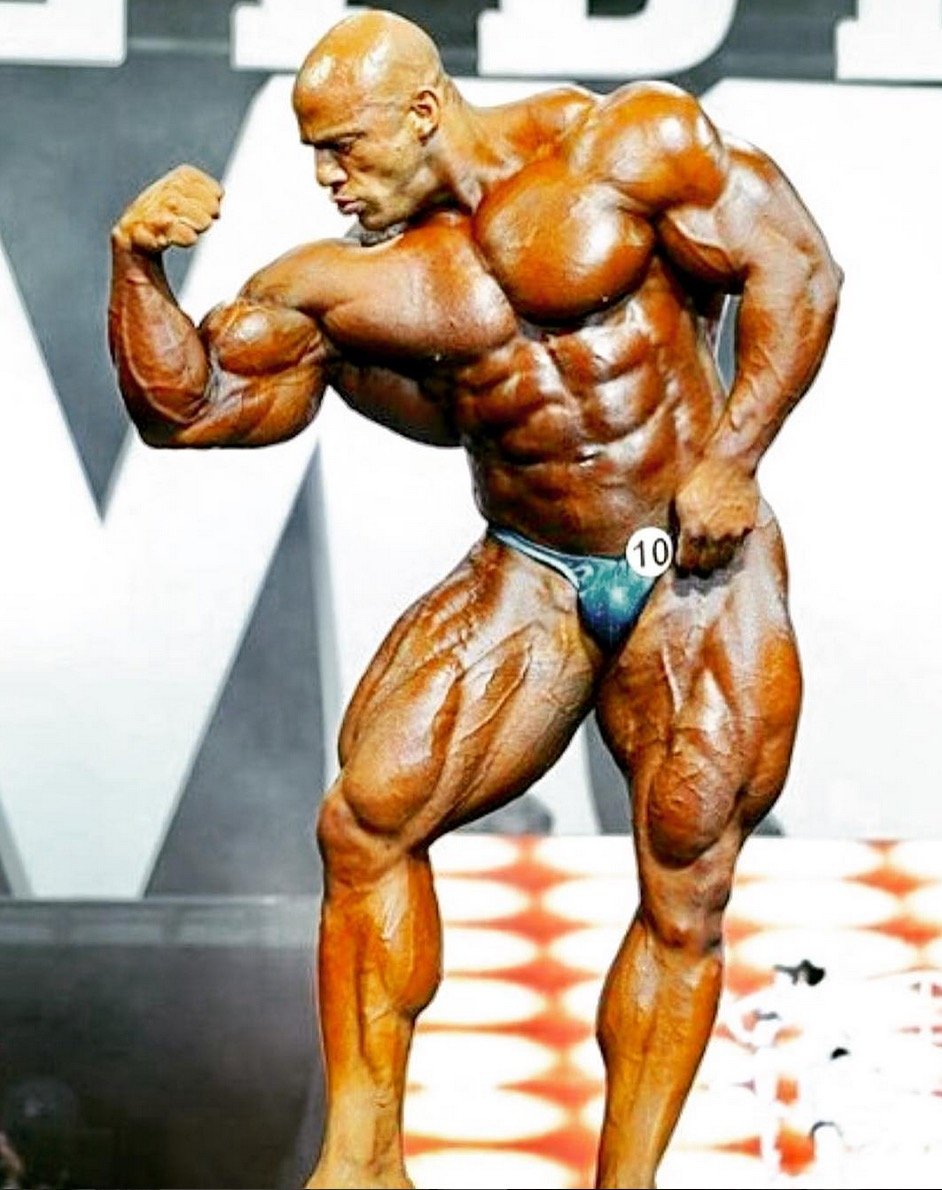 Mr Olympia Samir Bannout has been very vocal on the state of bodybuilding in the last couple of years and his voice is being heard more often now thanks to social media.

In a recent post on his official Instagram page, Samir expressed his opinion on why Big Ramy looks better the day after.  Samir blamed the coaches, which means he is pointing his finger at IFBB legend Chris Cormier.

Chris took Big Ramy under his guard after Big Ramy had stints with Dennis James, George Farah and Chris Aceto.

After a number of posts debating with other fans, Cormier posted a small message telling Samir that he does not know what he is saying.

Samir ppublishedsome heavy comments in Chris Cormier’s direction… something that could of been said behind closed doors.

Below are the posts of Samir answering posts and as well Chris Cormier’s short reply:

officialsamirbannoutIt is upsetting to me, every time that Ramy show up perfect the following day…which means that his coaches are not capable enough!! Sad but true… enough pretending you know it all… Cause YOU DON’T-
#muscles #popping #realshit #quality #peak #physique #mastery #in #experience #dr #dont #know #enough #stop #the #madness #keepitreal #mr #mro #experience #is #king👑

officialsamirbannoutOf course I am pulling for Ramy, but I am also with the truth, Ramy was unreal the following day, but why the BS ?? The prejudging is what counts most… there no needs to be great the day after… the main result start on Friday. Night… Saturday night doesn’t help him much… in fact I was sitting next to Dorian n Colman… both agreed that Phil/ Bonak/ Ramy… cause Ramy wasn’t popping up like he should… 100% the truth… could he been as hard as Bonak he would have been Mr. Olympia today! I mean that

officialsamirbannout yeah that’s true his midsection weren’t perfect… but he still was the deserving winners in that Olympia!! Let’s not hide from the truth and give excuses… that won’t help us!!

officialsamirbannout I looked at a video posted on Ramy’s wall… that video gave me a deeper insight at what went on!! The truth is he could have won… there was a HUGE error on behalf of those coaching him!! I am 100% sure of that … I even will tell them in their face n give’m a lesson on what they should have done… very unintelligent maneuvering made by inexperienced wanna be!!

officialsamirbannout yes sir!! He didn’t pop up like he should have… did you see Bonak quality… that what I am talking about!!

officialsamirbannout listen, nobody gang up on Ramy… don’t spread this BS… I was there with Dorian & Ronny … I will NEVER tell you lies… my prejudging wasn’t in my brother Ramy’s favor… I won’t even help my own son wins if he doesn’t deserve that!! The truth… Phil deserves it!!

officialsamirbannoutGuys please listen!! Hear me out, I love Ramy so much & will do anything to help contribute to him, I swear that all I want… but the truth MUST be told!! Don’t jump into conclusions and think I don’t care about him,, cause I DO!!❤️

chriscormier2 @officialsamirbannout I disagree with you , you know I’m close to them I see things you have no idea about what you’re saying

officialsamirbannout@chriscormier2 what’s that got to do with it… I LOVE Ramy…You have no idea my man. My 45 years of experience have an opinion & why not… Am I not telling the truth + I do speak the truth… without animosity… I want nothing more than watching Ramy wins!!! BTW, you told me back stage at the expo that Ramy wasn’t shredded enough… so ENOUGH BS Chris… I was the one who took you to the Middle East in the first place… you seems to forget quickly … yes I am proud of them big Chris, let’s all come clean… Only God is perfect!!

officialsamirbannoutLook guys, Dennis James is experienced & did an excellent job!! George Farah did well too… Chris Aceto with decades of experience did a fantastic job as well, but Ramy has to stick with the same coach cause they have already learned his body and can make things much easier the following years instead of switching every year… that’s my opinion with all due respect… I absolutely want NO CREDIT for anything… I am simply irritated cause he could have won already even now he shouldn’t change coaches in my opinion cause they have records of everything…what was good or bad… end of it from my side…Don’t get irritated cause I am only concern about big Ramy…Ramy is a wonderful young man with God givens genetic… he can even do it with any of us that keeps confusing him and putting him under pressure… I know if we all let him be… he will prevail!! Thank you for listening… we all have an opinion… that’s my honest opinion that comes out of love for Ramy!! No more or less- peace and God bless.

officialsamirbannout  You were there Mr.?? I was, pretty close too & I saw Ramy and talked to him for a bit in the auditorium right after prejudging… BTW, are you more knowledgeable than Dorian n Colman and myself… I’d say no way, but it’s your opinion & I respect that… but trust me Dorian n Ronnie wanted Phil to lose if anything & not to break their records, understand now… but the truth must be told, Phil was popping up more & we have our opinions too… like I said sure he was better than ever, but my point was did he looked more ripped than Phil or Bonak… honestly he did not… so please bodybuilding is complicated to many that don’t understand the real tech behind bodybuilding keep in mind that you may be @ 1% body fat and still come out last… Ramy with Bonak conditioning would have been absolutely UNBEATABLE!! …END of me answering to anyone about that topic!! Thank you.

officialsamirbannout  BTW, Hani Rambod has been spotless in my opinion, simply because he knows his clients to the T!! This is what it’s all about learning more n more from previous years … you don’t fire your coach from the 1st year.., give him or her another chance to make you better n better every year… you can easily tell dumb coaches though… hmmm… but Honestly I think Ramy got in fantastic shape and worked beyond hard & I am not talking about that… I am only referring to the final 72 hours no more or less!! If I was with Ramy the night before he would have WON hands down!! Don’t ask me how now… it’s already to late… remember 45 years experience can easily wipe out 10 doctors or coaches that done that only practice for 8-10 times… the truth & I insist on that-

officialsamirbannout people are stupid at times… cause I don’t think that happened at all… and Ramy WILL WIN it very soon!!

officialsamirbannoutno he’s not weak @ all and he looked incredible only he didn’t pop up enough, another word his muscles didn’t seems as etched as Bonack or Heath and if he looked as ripped as Bonack he could have easily won. Dorian and I felt the same but we were impressed by how lean he was, personally I think he was too dehydrated…a half of gallon of fluid would have done the job… of course there’s way to do that and not gulp gulp gulp…OMO!!

officialsamirbannoutChris is excellent and I have no doubt, because he’s been ultra ripped before, no more or less but he seems to misunderstand my point!!

officialsamirbannoutI am not taking sides I swear why I like Dennis n George yes I favor Chris cause I knew him from the early 80’s and we share similar concepts on the sport but what I said every one has helped and all could have taking him to win but keep changing things without smart thinking isn’t good at all… just remember, how many greats tried to win the O n failed why, we’re all human and we should learn from our mistakes… I honestly would stick with experienced champions instead of Drs or nutritionist… Bodybuilding competition is much deeper than everyone think & science alone won’t cut it!!! PEACE ✌️

It is upsetting to me, every time that Ramy show up perfect the following day…which means that his coaches are not capable enough!! Sad but true… enough pretending you know it all… Cause YOU DON’T- #muscles #popping #realshit #quality #peak #physique #mastery #in #experience #dr #dont #know #enough #stop #the #madness #keepitreal #mr #mro #experience #is #king👑 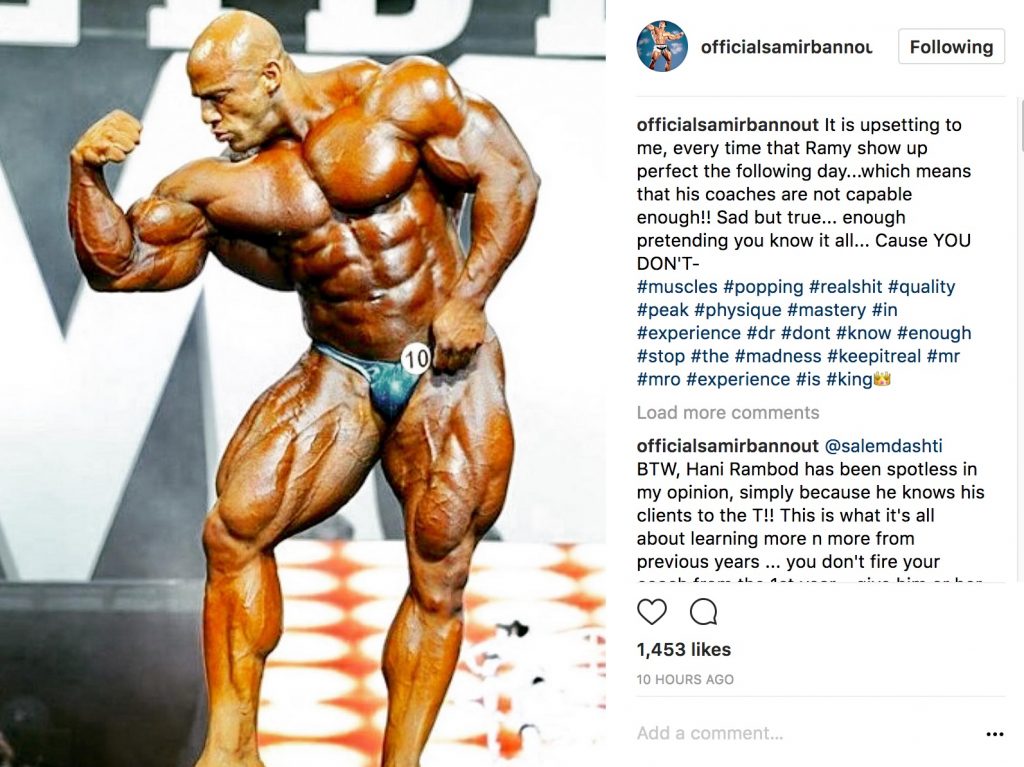 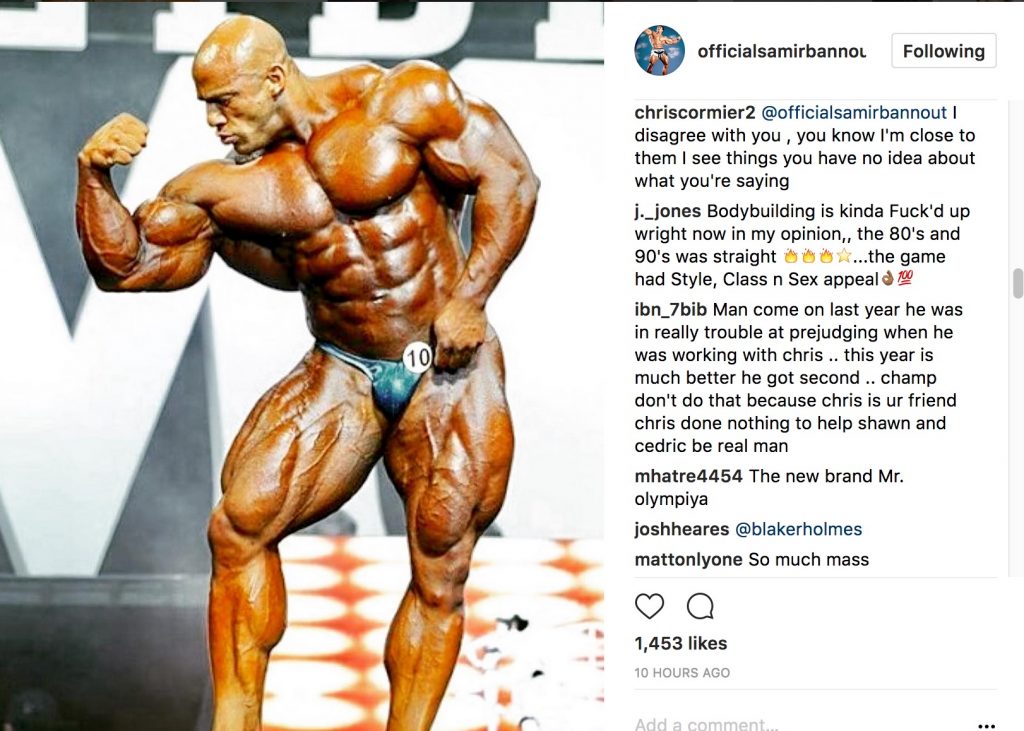 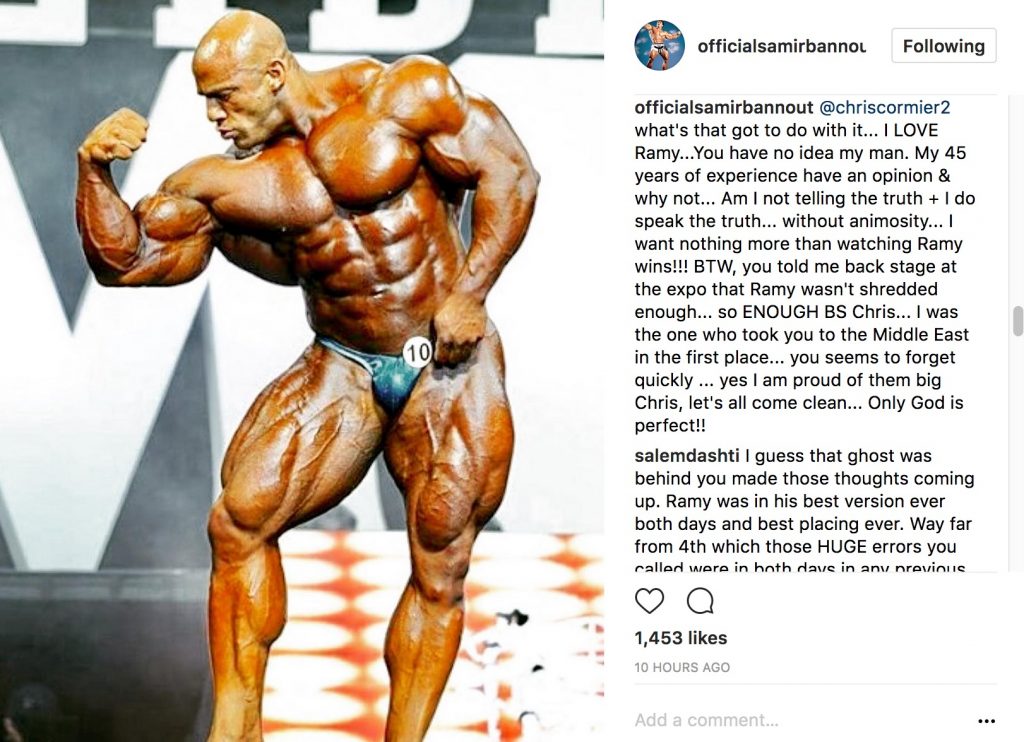