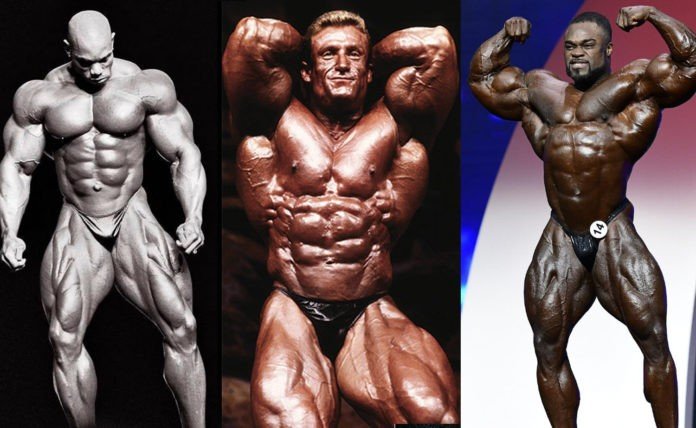 Is the sport of bodybuilding moving in the wrong direction?

The condition of the modern-day pro bodybuilder has been a hot topic for practically the past 10 years.

Discussions regarding the contest shape of pro bodybuilders always resurfaces during the Mr. Olympia and as well the Arnold Classic competitions to name a few.

Legends such as 6X Mr. Olympia Dorian Yates and Mr. Olympia winner Samir Bannout have always been vocal about the condition of the modern-day bodybuilder.

Other former champions have vented their frustration about the direction the sport has taken.

Today’s bodybuilders are always being compared to the legends of the 70’s, 80’s and 90’s.

It seems after the dominance of Ronnie Coleman the condition of the athletes have taken a turn for the worse.

Athletes got bigger to prove their dominance, but while they gained the size they lost the ideal sharpness of the physique.

The condition of the athletes today do not come close to the legends of the past.

Journalists and former champions are always being shut down for criticizing or just comparing today’s athletes to the past legends.

Evolutionofbodybuilding.net is not going to hide behind a rock and just say things to make everybody feel happy.

The sport is not going in the right direction and it is about time today’s athletes listen to the constructive criticism from the sports journalists and former champions.

It has become a new trend for some of the pro bodybuilders to say that it is a different time and today’s athletes cannot be compared to the past or that why should they listen to ‘keyboard warriors’.

The majority of ‘keyboard warriors’ spend countless hours going to competitions, watching videos and going through photos from the past and present. They modern-day bodybuilding journalist have the right to criticize the sport.

Just a few hours after the Mr. Olympia contest ended in the past few years, Samir Bannout can be seen on RXMuscle.com’s Olympia roundup criticizing the condition of the Mr. Olympia athletes including the winner year after year.

Samir has been venting his concern and frustration about the sport of bodybuilding on his official Facebook page. There are countless posts from Samir discussing the condition of today’s pro bodybuilder compared to the past. From posing to presentation, Samir gives his views on everything.

6X Mr. Olympia Dorian Yates has just been interviewed by Patrick Bet-David. During the interview, Dorian was asked about what he thought of the 2019 Mr. Olympia winner Brandon Curry and the other athletes.

“I respect all the guys up there, all doing their best, but if I’m to be honest, and that’s pretty much always what I am, I feel the standard of the Olympia is not what it used to be. The whole thing’s diversified.

You’ve got all these different categories and classes and everything, but the Mr. Olympia, the pure bodybuilding itself..

You had three guys there that I guess they were pretty close. There were two guys in what I would say pretty good shape, you know? They were in great shape, but they were pretty small, William Bonac, and the guy from Iran [Hadi Choopan] are very good and in good shape, but they’re small guys. So Brandon won it because, I believe, stronger stature. It’s bigger, it looks more like a Mr. Olympia, but he wasn’t in incredible shape. So I think it was probably one of the weaker Mr. Olympias that we’ve seen.”

When asked about Brandon Curry, the winner of the 2019 Mr. Olympia, Dorian again did not hold back when answering the question.

“Well he’s got very good fullness, good roundness to the muscles, and really no noticeable weak points in that pose. But he’s lacking deep separation, and conditioning that used to be the norm in the Mr. Olympia.”

Dorian also said that Brandon would not place in the top six in the era he dominated. Dorian continued by saying that Brandon contest condition was the condition he was in six weeks out from the Mr. Olympia.

These comments caused controversy and Brandon Curry was quick to answer back.

Even Arnold Schwarzenegger himself has been trying his best to put the sport in the right direction. Arnold made sure the pro bodybuilders were given points for their posing routines as well. This was done to make sure the athletes take posing seriously again.

Schwarzenegger has as well been very vocal on the distended abdomen. Arnold wanted to see more vacuum poses on the professional bodybuilding stage again as it was a norm in the 70’s and 80’s.

No matter how many times today’s athletes go on social media to defend their condition, they still cannot say they are better than the athletes of the past.

If Dorian Yates had to step on today’s Mr, Olympia stage with the condition he presented when he dominated the sport, nobody would stand a chance.

Even Phil Heath at his best would still dominate the sport when at his best. Injury has sidelined the 7X Mr. Olympia Champion and the 2018 Mr. Olympia judges picked Shawn Rhoden not because he was bigger, but because he presented the ideal physique and exposed the injured mid section of Phil Heath.

Mother nature did not change the male physical characteristics in the past 40 years. So why has the condition of the pro athlete take the wrong turn.

What has changed is the way athletes are training and dieting. As well another big factor in the sport of pro bodybuilding to take in consideration is the other substances today’s athletes are taking and how much they are taking.

Bigger is not always better. The show promoters want bigger and freaky bodybuilders, but the what sport needs is aesthetic, conditioned and proportionate bodybuilders.

The judges have a role in this to show the athletes in what direction they want the sport to go. If the judges take a stance, the athletes will adjust the way they prepare for a show to get the best results.

The responsibility also falls on the bodybuilders themselves, they have to show the judges what the ideal physique should be.

At the 2019 Mr. Olympia, newcomer Patrick Moore received a lot of attention with his aesthetic physique. Patrick ended up placing tenth. He could of easily placed higher.

Former champions of the sport and journalists even have the right to criticize the way shows are being judged. If the wrong decisions are being made, they have to answer for their mistakes.

The modern day pro bodybuilder should take all constructive criticism in a positive way. What is usually said is for their benefit of the athlete. The top athletes will not always get the best criticism from their family or best friends.

The best criticism will always come from an outsider.

IFBB Professional League head judge Steve Weinberger will not hold back when giving advice to help bodybuilders improve. Many might be surprised by his criticism, but they will do everything possible to make things right.

The major federations have added the Classic Physique division. This division is gaining a lot of popularity as it truly focuses on the ideal bodybuilding physique.