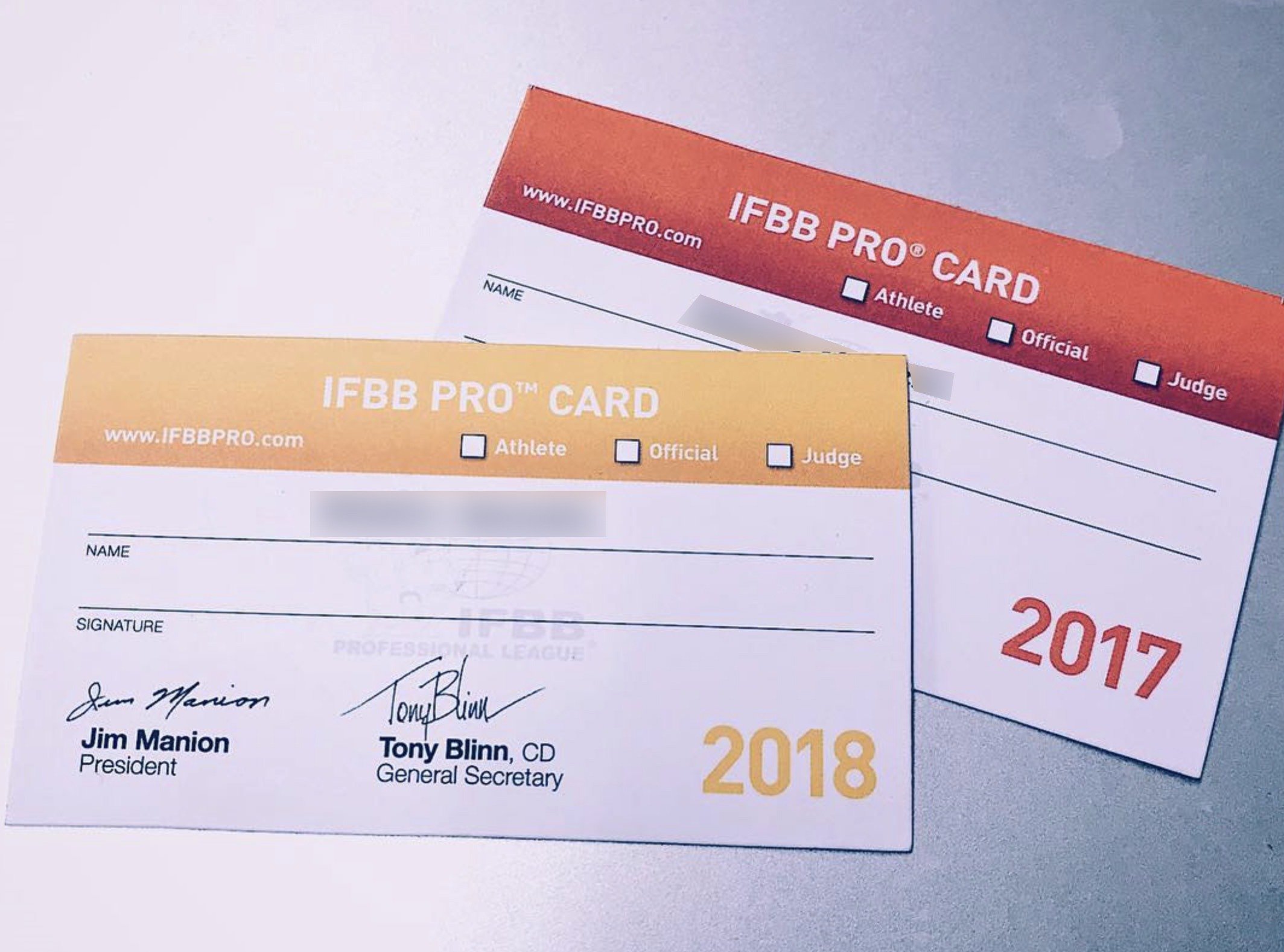 The crucial mistake of NPC Global.

The NPC has spread its wings and went global or lets just say international in 2018.

They say they left the IFBB at the end of 2017, but actually they were suspended from the IFBB.

The NPC was the USA affiliate to the IFBB but now they have been replaced by the newly formed IFBB Physique America, headed by Wayne DeMilia.

Since the split, Jim Manion and the NPC has decided they want to go head to head with the IFBB and take their competitions internationally.

This is a big task since the IFBB already has over 196 countries (Nations) affiliated with them.

The NPC are making it very easy for athletes to earn the once prestigious  IFBB Pro League card (We will call it NPC/Pro League card).

In the USA, the NPC have a well oiled machine when it comes to winning a NPC/Pro League card.

In the USA, the amateur athlete will first have to earn their right to compete at the National level in a National Qualifier.

If they qualify then they can compete in the National championships which gives them the opportunity to win the NPC/Pro League card.

It is a long process that makes the athlete earn their right to be at a high level before they can actually compete for a NPC/Pro Card.

These are the NPC competitions that offer NPC/Pro League cards:

All the NPC/Pro League contests information and rules can be seen HERE.

The IFBB have a similar process, athletes compete at a National level (National Championships). The overall winners then are given the chance to compete either at the prestigious IFBB Diamond Cup competitions, Arnold Classic’s or the biggest competitions in the calendar, the IFBB European Championships and the IFBB World Amateur Championships. Many large countries are now organizing IFBB Elite Pro qualifiers as well.

The IFBB are heavily criticized for the way they handle things when it comes to athletes winning IFBB Elite Pro cards, but it does make sense and in the long run and the athlete that earns it understands the reasons why.

The IFBB have a quota (number of athletes) when it comes to winning IFBB Elite Pro cards at National Championships, if the country or nation does not make the quota, the competitor will have to earn it at an international level contest.

In 2018, over 1000 NPC/Pro League cards where handed out and these athletes practically disappeared

Earning a Pro card does not mean your at the Pro level, and that is why many IFBB Federations suggest to their athletes to continue competing at the amateur level. This way, they become seasoned athletes that slowly prepare themselves physically and mentally for the Pro level and when they arrive to that point they are ready.

As well the IFBB have the IFBB World Rankings. If the amateur athlete places in the top five at the end of the season, they receive cash prizes (up to $15,000 for the winning athlete) and as well their IFBB Elite Pro card as well.

Now, getting back to the NPC, on the international level, it has become a different story.

Athletes from any federation are just entering these competitions, winning the show and earning their NPC/Pro League card. Just as simple as that.

While in the USA, athletes are basically going through a long process to even get the chance to win a NPC/Pro League card, in other countries, some athletes compete only once and earn their pro status.

In 2018, over 1000 NPC/Pro League cards where handed out and these athletes practically disappeared.

What is the reason? The reason is that these athletes took the easy way out and are not ready to compete at the NPC/Pro League level even though they are pro’s.

We are seeing a new trend happening, especially on the international level. If an athlete is finding hard to climb the ladder with the IFBB or even NABBA and other federations, they are signing up to compete at various NPC/Pro League qualifiers in Europe and other parts of the world.

The number of competitors will be low and it will be very easy for them to win the once prestigious NPC/Pro League card. And then these new NPC/Pro League athletes will never be seen again, other than a change in status on their social media page.

The saying ‘You win and You’re In’ by the NPC/Pro League is a lousy way to convince athletes to earn their Pro status.

When you compare the way the NPC amateur system works in the USA and the way they are working at the International level, there is a big difference.

Most probably the athletes that are earning their NPC/Pro League card in Europe or other parts of the world would not stand a chance competing with the NPC at a National Qualifier or any IFBB International Elite Pro qualifier.

That is why we never see these new NPC/Pro League athletes again.

In the new era of bodybuilding an fitness, the amateur athlete is looking for the fastest way to earn their Pro status. They can take the easy way out and disappear or they can take the right path, that is a bit longer and become athletes that everybody will remember.

For example, the popular NPC/Pro League athlete Blessing Awodibu (The Boogie Man), climbed the IFBB ladder and earned his Pro card through the IFBB. He made a decision to compete with the Pro League. The difference is that Blessing is a an athlete ready to compete at the Pro level as he took his time competing at the amateur level, growing and getting better show after show.

These photos below show the comments of Blessing Awodibu when he was climbing the ladder with the IFBB and what it means to earn Pro status the right way. 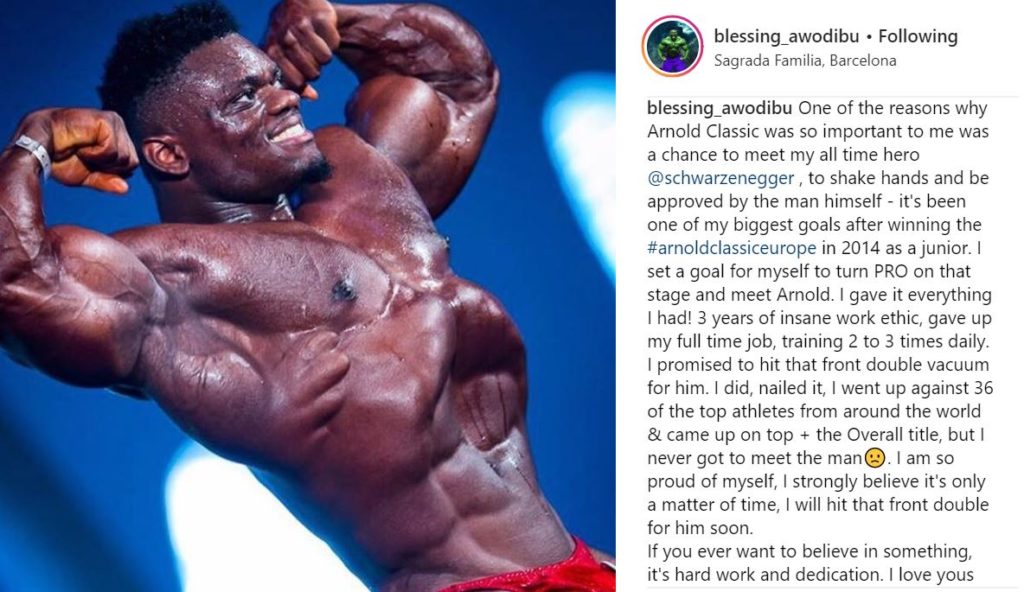 As others that are now competing within the NPC/Pro League and even stepping on the Olympia stage, many in the industry do not know this, but the athletes have climbed the ladder with the IFBB and not the NPC.

Before the split in 2017 they had a decision. They could of competed in the newly formed IFBB Elite Pro League, that had become very popular in its first year, or compete with the NPC/Pro League.

On the other side of the fence, a majority of the new IFBB Elite Pro athletes are very active on the pro circuit and they all compete with the goal of earning qualification for the IFBB Elite Pro World Championships.

The new NPC/Pro League athletes in Europe will find it very difficult to travel to the USA to compete in the major competitions that earn them the chance to qualify for the Olympia Weekend. It is a big financial burden, unless a sponsor takes care of all the expenses.

Another factor is that athletes from Iran cannot even compete in the USA, so getting a NPC/Pro League card is useless.

At the 2018 IFBB World Amateur Bodybuilding Championships, the athletes from Iran dominated the contest with fantastic athletes. A number of them earned IFBB Elite Pro status and we will surely see them competing in the 2019 season again.

Gone are the days where one or two athletes earn Pro status per year. When these athletes used to earn their Pro status, they were ready to go up against the best because they climbed the ladder the right way.

Even our friend Bob Cicherillo (The voice of Bodybuilding) is a great example of what an athlete used to go through to earn the once prestigious pro status. It took Bob 12 attempts (13 years) until he finally earned his pro status in 2000. His adventure to earn his pro status started in 1987. 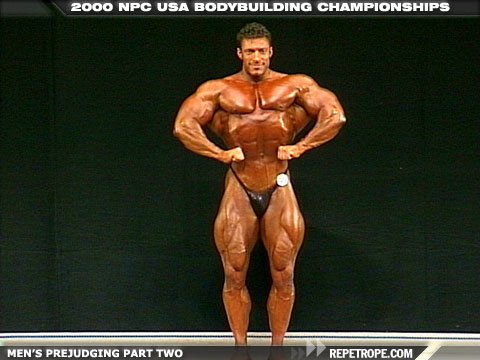 This is the fighting spirit that is lost from the sport today. Bob Cicherillo did not give up or move to another federation, he stuck to his dream. If somebody can show this fighting spirit it is Bob, but unfortunately he is pushing the ‘You win and You’re in’ NPC/Pro League gimmick in Europe and other part of the world. 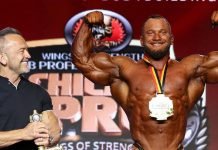 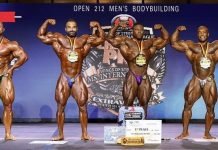