The Giant Killer.  It was the right nickname for Danny Padilla, who, at 5’2″, made a habit of defeating opponents much taller during a professional bodybuilding career that spanned an impressive 22 years.  In fact, Padilla placed in the top 10 in 96% of the professional contests he entered, and for many he still ranks as the best short bodybuilder ever.  Arnold Schwarzenegger has stated that Padilla had the best symmetry of any bodybuilder.  For all those reasons, he has earned his Hall of Fame investiture.

Born on April 3, 1951, in Rochester, New York, Danny was the sixth child of Ramon and Frances Padilla.  Danny started working out around 1958, when, in the first grade, he encountered his first muscle magazine and was inspired to become a bodybuilder.  Some mail-order courses were delivered, some improvised weights were employed and some chinups were performed.  His consistency was greatly rewarded and his hard-earned muscularity later caught the eyes of high school coaches who requested that he wrestle, or become a gymnast, or play football.  Despite the pull of many different sports endeavors, his focus remained solely on becoming a competitive bodybuilder.

In 1970, 18-year-old Padilla became Mr. Rochester, in his first competitive foray.  He then moved on to national contests, where it wasn’t an easy ride at first: he placed eighth at the 1972 AAU Jr. Mr. America in York, Pennsylvania, and then slipped to 15th at the same contest in ‘73.  A month later, in the AAU Mr. America, he managed only 15th. 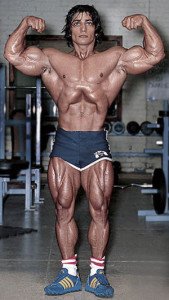 His next victory came a month before he turned 23 – Mr. Syracuse – but his 18th place at the 1974 AAU Mr. America may have hastened his fortuitous decision to switch to the IFBB.  The following year, at the Felt Forum Theater in the old Madison Square Garden, he stood four inches under the 5?6″ height limit for the shortclass at the 1975 IFBB Mr. USA, but he won his class.  He also defeated medium- and tall-class winners Roger Callard and Denny Gable for the overall.  The Giant Killer was born.  The following year, only Mike Mentzer prevented Padilla from winning the IFBB Mr. America in New York City.

Padilla’s IFBB pro career took off in 1978 in Los Angeles when, at age 27, he was runner-up to Robby Robinson in the Pro World.  In fact, every time Padilla placed second in IFBB pro contests, the winner was always named Robinson (twice Robby, one Eddie).  Overall, Padilla placed top five in half of his 26 IFBB shows.

In 1990, Padilla left the IFBB for Vince McMahon’s fledgling World Bodybuilding Federation.  Padilla competed in what proved to be that organization’s only two events, placing out of the top five in both.
About two years after the WBF failed, Padilla returned to the IFBB in the Masters Olympia division.  He managed to place seventh in 1994 and 10th six years later.  Then, at age 49, Padilla, a man considered by some to be the best-developed bodybuilder ever of his height, retired from competition, leaving a legacy that belied his height. 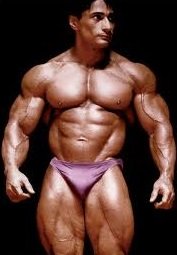