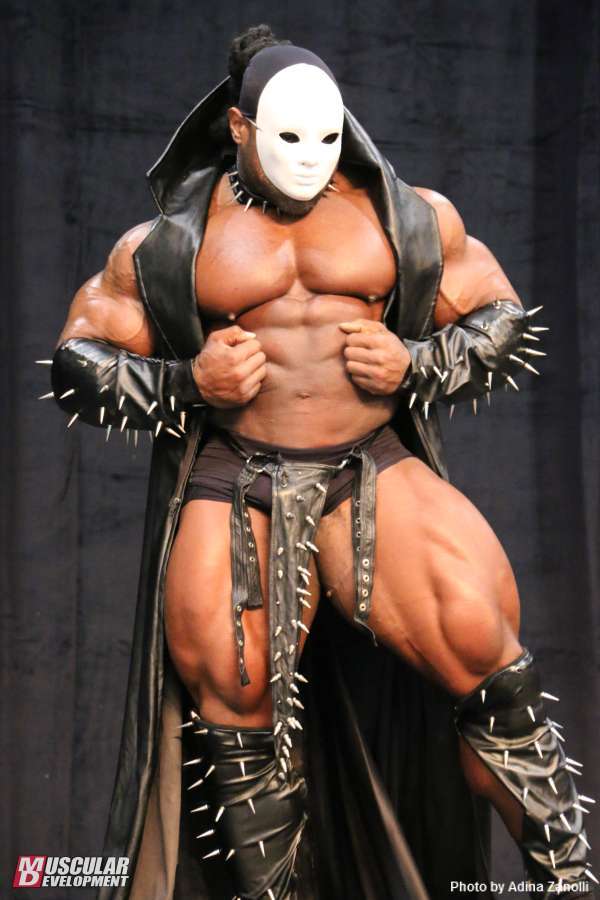 Shawn Ray expressed his thoughts of the posing routine on Muscular Developments forum.

Below is what Shawn wrote:

Promoters need to put a Stop to “Props” at Guest Posings.

This is not what people Pay to see

It doesn’t justify the “Sadomasicistic” posing out fits unfit for kids and families to watch one of the sports elite & best built Pro’s?

This type of “ARTISTIC” Style holds the sport back and yes “I’m not a Fan” of this type of exhibitionism related to the sport of Bodybuilding nor would I Hire or Pay a top Pro to perform a guest routine in these out fits.
It’s not Halloween and watching a Bodybuilder Pose “Covered up” is like watching a Facial Fashion Model being on display wearing a Burka Head Set.

I suggest, no I “Mandate” that All Promoters hiring IFBB Pro’s to “Guest Pose” enforce that that is Exactly what the athlete shows up to do. Anything beyond that should be Detailed so the Promoter knows what he is Paying for as well they can Advertise “Guest Poser or Guest Performance” there in lies the expectation difference and r lemonade the element of surprise as well, if the IFBB doesn’t reel this shit in its only a matter of time before some creative genius takes Kai’s creativity to the next level with Dogs, Chains, Slaves, God only knows…..
Point is- Your a Bodybuilder so just freaking do a posing routine showing off your Body not all the crazy Costume, Masks and BS that actually take away from what you worked your ass off to display.

Dave and Chris totally disagreed with the comments of Shawn Ray. According to Dave, bodybuilding is already boring enough with everybody doing the same routines and it is a breath of fresh air when Kai Greene walks on stage to do his routine.

Chris went on to say that every promoter looks to Kai for one reason, and that is entertainment and if Kai does not produce his usual act, the promoter with think he was scammed.

Dave and Chris agreed to say that bodybuilding needs more characters like Kai Greene in the sport.

Getting back to Shawn, it seems that he is not getting the support that he expected. If Kai had done a routine like this during a IFBB show that he was competing in, maybe Shawn would have had more support.

The strict attitude that the IFBB once had, seems to be loosening up and the sport could slowly be heading to the way the WBF (World Bodybuilding Federation) used to work. A rock concert type of show, that would keep all the fans on the edge of their seats.

Watch Chris Aceto and Dave Palumbo talk about Shawn Ray at the beginning of the show: