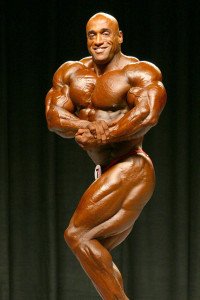 Dennis Tyron James was born in Heidelberg, Germany on 31 May 1966.

His first NPC (National Physique Committee) competition was the NPC Junior USA of 1996, where he placed 13th. In 1999 he competed in his first Night of Champions, where he tied 14th.

The following year, in 2000, he competed in his first Arnold Classic, placing 4th.

His first Mr. Olympia was in 2000 as well, where he placed 11th. He has competed in a total of seven Mr. Olympias, with his highest placing coming in 4th in 2003.

Dennis has been featured in many fitness and bodybuilding articles, including the cover of FLEX magazine. He currently lives in Phoenix, Arizona.

Dennis has said that the 2010 Mr. Olympia will be his last. He made a comeback at the 2012 Masters Olympia and placed third.