Since the end of the 2017 amateur bodybuilding season, the NPC have been promoting shows in a different way when it comes to Pro League qualifiers.

Since their suspension by the IFBB in 2017, the NPC have literally turned into a ‘open for all’ farce.

In the past and still today, the IFBB have a policy for international competitions that have IFBB Elite Pro qualification for the athletes.

The IFBB work in a way that the best athletes or the qualified athletes from each of their 196 affiliated nations send their best athletes to major international events. The events we are talking about are Arnold Classic Amateur Europe and Africa, Diamond Cup, IFBB European and World Championships plus other international qualifiers. As well some IFBB athletes go to these contests without qualifying, but they are picked by the federation and checked to see if they are ready to step on the international stage.

The reason for this is that the best of the best amateurs represent their countries and the highest level on competition will be presented to the fans and judges.

The difference is that they have literally opened their doors for any athlete from any federation.

For many this is not a problem, but in the long run this will ruin the prestige of these contests, especially the Arnold Classic USA.

When a federation such as the NPC open their doors to any athlete, we are saying even first-time competitors, the level of the contest will decrease instead of increase.

We already witnessed this at the first Arnold Classic Amateur USA in 2018 run under the NPC. Some amateur athletes should not even have stepped on stage.

We are not talking about a small national contest, we are talking about one of the biggest and most prestigious amateurs shows in the world, the Arnold Classic Amateur USA. The bodybuilding and fitness world have their eyes on this contest to see future stars step on stage. But when it is a ‘open for all’ it becomes a circus.

Why have over 2000 amateurs when only 900 are the ideal athletes. It is disrespect to the other new athletes who will literally feel intimidated and most probably will never compete again. There are other competitions where these young athletes can climb the ladder slowly.

Associations such as the Canadian Physique Alliance (CPA) affiliated with the NPC/Pro League could not have looked any more desperate with their ridiculous post on social media inviting anybody at any level to the 2019 Arnold Classic Amateur USA.

In 2018, when  the NPC introduced this system for athletes, after the show, social media was on fire with competitors and fans complaining about how bad the level of competition was.

We must not forget the money involved. Every federation has registration fees, but there is a difference.

When the IFBB affiliates have qualifiers for major competitions such as the Arnold Classic Amateur, European and World Championships and others, the federations usually cover all the expenses for their qualified athletes (Travel, accommodation and others).

This is what makes these contests so prestigious for the IFBB and the right athletes are selected.

For example, for an athlete to compete at the 2019 Arnold Classic Amateur USA run under the NPC, they have these costs:

As well the American athletes have to register with the NPC, this costs another $125 for the year.

Seeing all these fees it makes you wonder if this is one of the reasons the NPC is opening its doors to any athlete from a first timer to the established amateur.

We at evolutionofbodybuilding.net have nothing against the organisers of the Arnold Sports Weekend. But seeing what is happening in the bodybuilding and fitness world has become worrying.

The owners of the Arnold Sports Weekend see how things are run with the IFBB and also they see what is being done with the NPC.

The IFBB have the best amateurs from each country sent to their show and the NPC has become a free for all.

The athletes that compete with the IFBB’s Arnold Classic Amateur Europe and South Africa qualify to make it to this event.

The NPC’s Arnold Classic USA, Australia and South America is open to anybody at any level.

So… what contest do you want to see? 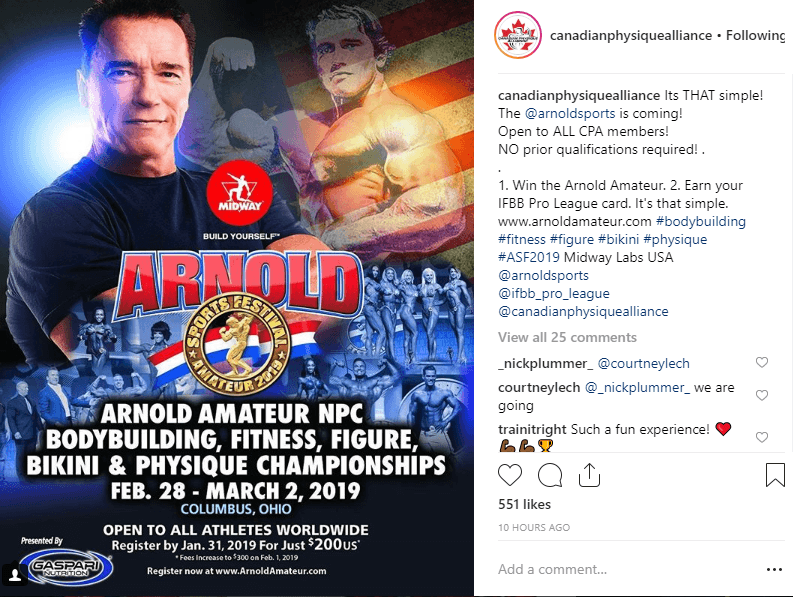