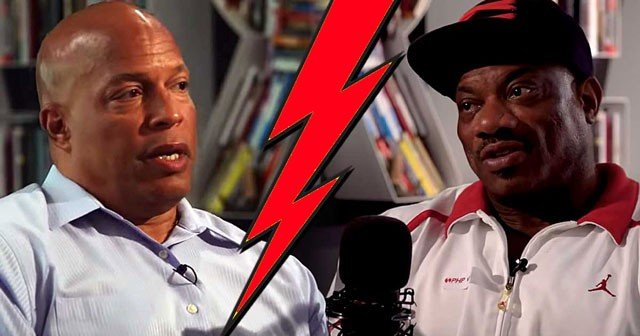 The battle of words continues between Shawn Ray and 2008 Mr. Olympia Dexter Jackson.

All this started when Shawn Ray was interviewed by Patrick Bet-David a few weeks ago.

During the interview with Patrick, Shawn Ray insisted that he was always a superior bodybuilder than Dexter Jackson.

These comments did not go down well with Dexter and he explained himself when he was also interviewed by Patrick Bet-David a few weeks later.

It seems that Shawn was not satisfied and his next move pushed Dexter to be more aggressive in his latest video published on his official Instagram page.

A few days after Shawn Ray’s interview was published by Patrick Bet-David, an article appeared on a blog praising Shawn Ray. The blogger that was behind this article did not even wait to hear the response of Dexter to get a better idea of the story.

To be exact, the blogger did publish an article afterwards about Dexter, but he did not mention Dexter’s response to Shawn Ray during his interview with Patrick Bet-David in his lengthy article.

In the article, a photo was published showing points about Shawn Ray that was aimed directly to Dexter Jackson and his trainer Charles Glass.

The article was captioned “Shawn Ray gets in the last word”. This is far from the truth as Dexter published two videos immediately afterwards.

Dexter in his latest video called Shawn a coward and as well says Shawn is hiding behind other people who apparently are posting these photos without him knowing.

Dexter went so far to say that Shawn is not even a worthy of being inducted into the bodybuilding hall of fame.

After a 30 minute rant against Shawn Ray’s methods and personality, Dexter reveals that he will be publishing another video interviewing people about Shawn Ray.

Watch Dexter’s latest reaction in the video below:

DEBATE TIME!! @shawnrayifbbpro said he’d beat me in my prime? I’m the same weight as him in these photos. My 3rd year in the pros. Haven’t reached my prime yet. Y’all be the judge. Lol! I know we all are fans fans.. Put that shit aside and judge what you see. Since he runs his mouth so much.. I thought I’d let y’all judge. I always tell him he’s only won 2 shows in his 13 year career. Lol! And don’t compare me to you if you’ve never won the Olympia. #dex #dexter #dexterjackson #dexterjacksonclassic #dexterjacksonproductions #mro #mrolympia #mrolympia08 #blade #built #builtbyblade #30daychaenge #bodybyblade