Since Arnold Schwarzenegger commented on the state of bodybuilding at the Arnold Classic, many retired and modern day IFBB Pro’s have agreed with the 7X Mr. Olympia.

But, today a post has been spreading the wild fire of 4X Mr Olympia Phil Heath saying that Arnold Schwarzenegger had chicken legs!! Is it possible that he really said this??

The fans seem to be begging for the look of the 80′-90’s, but it seems that Phil Heath totally disagrees with this.

Phil obviously is riding the wave of success on and off the stage. The reality is that that this is something that many Pro bodybuilders only can dream of doing.

Phil Heath can only back the sport that brought him so much success as those before him. Being interviewed on Bloomber TV is something you would never of heard of for a bodybuilder 10 years ago.

Read the complete discussion below: 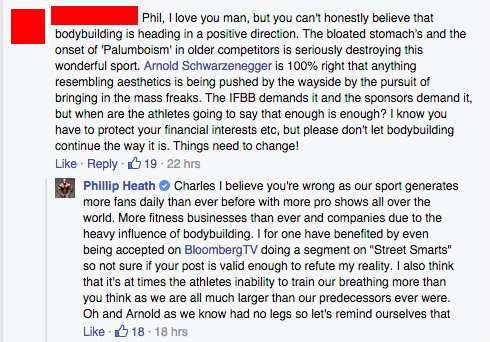