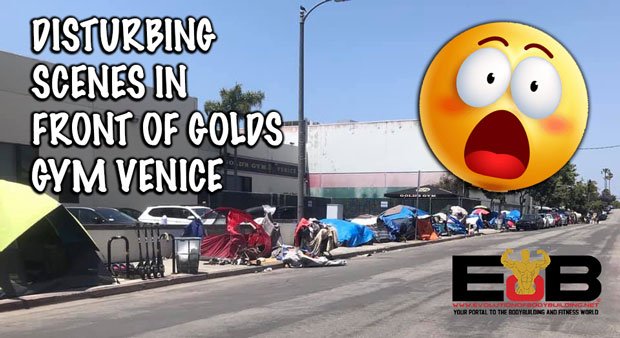 Disturbing scenes in front of Gold’s Gym in Venice, California.

When we hear about Gold’s Gym in Venice, California, the first thing that comes to your mind is a magical place, the mecca of bodybuilding.

If you don’t live in California, you will have a different impression of how the place looks.

The majority of bodybuilding and fitness fans vision Gold’s Gym in Venice, California as an amazing, magical place that caters to the some of the best athletes in the world.

This image of this area changed completely after famous photographer Bill Comstock published a number of photo’s on his official Facebook page.

Bill published a number of photos showing the homeless literally moving into the vast empty space made available due to the coronavirus threat.

As the city is still under lockdown, empty parking lots and less traffic makes this the perfect location for the unfortunate people that have no home to accommodate.

People sleeping on the sidewalk and tents all over the place is the new look in front of Gold’s Gym Venice.

The comments on Bill’s Facebook post from various prominent figures in the industry give a more detailed description of the area.

“It stinks of urine and human excrement”, commented Bill when describing the area.

Seeing these images will make a bodybuilding fan maybe think twice before making the long trip to the area if they live outside of the USA.

Unfortunately this has become a big problem in the USA and when reading all the comments, the blame falls on the government.

Comments about the state of Gold’s Gym Venice

Bill Comstock It’s like Kolkata. And it stinks of urine and
human excrement
.
John Romano It’s ONE block from Main Street!! …. a lot has changed since that was home.
John Romano I know every angle of those photos. My god… I lived around the corner on Vernon. I can’t believe it
Dave Liberman How horrifyingly sad. Such a shame on so many levels. How does the main parking lot of a Golds (across Hamton) look? Heard it was filled with homeless.
Jonas Giatras It smelled like piss so bad behind it last time I was there, we had to run past it.
Flex Wheeler I was told by my close friends who still train at Gold’s Gym Venice, how bad it was over five years ago.
But I actually never seen photos. It’s like out of some fictional horror movie.
Humanity is dead, people have just lost all commonsense of helping one another.
I can’t believe there’s so many millions and billionaires in California alone that would even allow this to happen.
If I was that wealthy I wouldn’t be able to live with myself if I knew of such living conditions all a rock throw away from one of the biggest global companies.
SMH
Los Angeles. City of dreams and angels. More like city of broken dreams and demons.