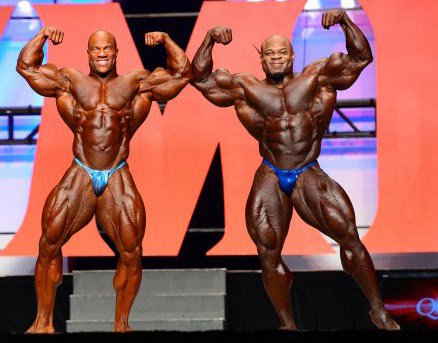 The talk around the bodybuilding world in recent weeks is if Kai Greene will compete in the 2016 Mr. Olympia.

Kai made a return to the stage with an Arnold Classic hat-trick in 2016 and it got everybody talking again.

The big question is… who needs whom?

Kai Greene has been a very busy man with his new product range, NFL spots and as well with Generation Iron. We must not forget the decent earnings from the Arnold Classic victories. If we had to see it from a financial point, Kai does not need the Olympia as he is doing just fine.

But we have to look at how Kai wants to be remembered and what mark he will leave on the bodybuilding world when the time comes for him to hang up his posing trunks.

Almost every bodybuilding fan wants to see the rivalry of Phil Heath and Kai Greene on the stage again. These two athletes have great respect for each other, but when it comes to the stage, they mean business.

Phil Heath is on a (hard) path to try to surpass the record of 8 Olympia victories that Ronnie Coleman and Lee Haney hold. And he will try to crush anybody that crosses his path.

At the 2015 Olympia Weekend, Phil Heath was not 100% and veteran Dexter Jackson almost beat Phil to the title. Obviously Kai Greene was missing and it could have been his year if he came in his best condition.

Phil Heath is a genetic freak and for somebody to defeat him, they have to be almost perfect. Phil Heath even at 90% is still a favorite to win.

At the Arnold’s, Kai’s biggest competition was Cedric McMillan. Some say Cedric should have won the Columbus show.

We have not seen Kai against Dennis Wolf, Dexter Jackson, Shawn Rhoden or Big Ramy this year and this leaves us with a lot of unanswered questions.

Is Kai still Phil Heath’s greatest competition? I would say yes. If he and George Farah do their homework right from now till September, Kai will surely be a threat to Phil’s crown.

The Olympia and Phil Heath definitely need Kai Greene. To be honest, I felt there was a big void at the 2015 Olympia when Kai was not present. Phil Heath did not have his main rival, but then he found a Dexter Jackson ready to pounce on him. The Olympia organizers have surely felt his void. Kai has a great following and it surely affected the 2015 edition.

We also must not forget, Kai is a fantastic show man. Nobody can come close to his posing routines.

When asked by Shawn Ray if he will compete against Dexter Jackson at the Arnold Africa, George Farah immediately said the only place Kai and Dexter will compete against each other is on the Olympia stage, but Kai jumped in and said no. Kai was quick to say he is enjoying being part of the Arnold Classic movement. This surely was the biggest sign that something is still not right between the Olympia organizers and Kai Greene.

If Kai Greene does skip the 2016 Mr. Olympia, it will not dent his pocket but it will definitely dent his legacy as time is running out. He will basically hand another Olympia title to Phil Heath and let down the fans.