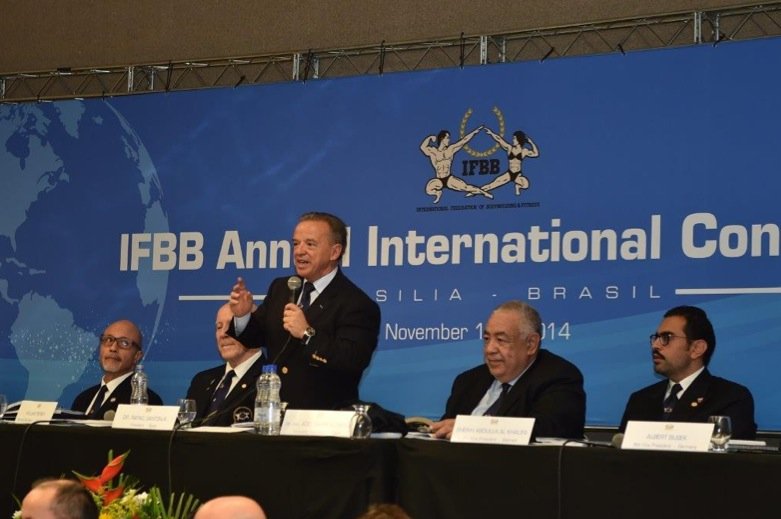 Top news from the 2014 IFBB Electoral Congress: Dr. Rafael Santonja was re-elected IFBB President for the next four-year term! The elections took place at the IFBB Congress in Brasilia, Brazil, held in conjunction with the 2014 IFBB World Bodybuilding Championships. The elections was the last part of the Congress, after all reports by the different IFBB Executive Council members, 2015 IFBB Calendar of Events discussion, IFBB Executive Council decision approval and discussion on different propositions provided by National Federations.

Dr. Santonja’s candidature was proposed by the Polish Federation President and delegate to the Congress Mr. Pawel Filleborn.  No special presentation was needed as Dr. Santonja has held this position since 2006, when he was elected IFBB President for the first time, as a successor to the IFBB founder and first president Ben Weider. Then he was re-elected in 2010. During his fist two terms Dr. Santonja proved himself to be a very efficient manager, open-minded strategist and innovative leader, who moved the Federation up to a new highest level, never expected before.

Knowing well all these facts, delegates represented National Federations from all continents unanimously approved Dr. Santonja’s candidacy with great applause and standing ovation, giving him a mandate to run the Federation through the next four years. In the first part of the Congress Dr. Santonja delivered his annual President’s Report, covering not only the passing year but also the whole passing term. His tireless work and activity “24-hour per day and 364 days per year” as Mr. Albert Busek said, is amazing and has brought incredible successes: IFBB affiliates190 member countries, holds around 2000 events in a year worldwide, participates in more and more Games of the Olympic Program, is active on all continents, nowadays runs competition in 11 sport divisions (!), implemented many new top international events (like Arnold Amateur, Amateur Olympia, Ben Weider Cup), the biggest IFBB events have over 1000 participants, developed new media cooperation (Eurovision contract) to mention only the key points of the recent activity.

The latest example of Dr. Santonja’s activity: re-elected President has had no time to celebrate his electoral success, going directly from Brasilia to the Phuket Island in Thailand (16,700 km or 10,400 miles!) to participate in the 4th Asian Beach Games of the Olympic Program and supervise bodybuilding competition there, being a part of the Games

Just after the Beach Games in Thailand, our President will go directly to Moscow, Russia, to take part in the 2014 Amateur Olympia World Showdown with USD 50,000 prize money, and then will supervise the 2014 World Classic Bodybuilding Championships to be held in Benidorm, Spain. And, maybe, the next weekend will be free for him as there is… Christmas at that time. And then a new year will begin and new duties. Is it possible to have a better president? NO! Viva Presidente Santonja!