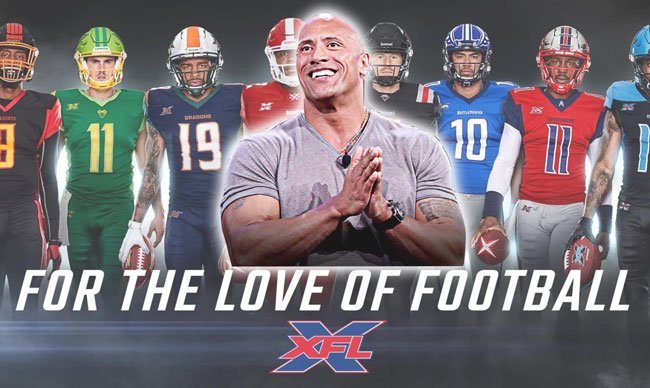 Dwayne Johnson and Redbird Capital buy the XFL for $15 Million.

Dwayne ‘The Rock’ Johnson is always looking for an opportunity to expand his brand, especially in the sport and fitness industry.

Dwayne Johnson and his partner Dany Garcia have built an empire together that includes film, television and fitness to name a few.

The latest acquisition by The Rock and Garcia is the XFL, a professional American football league in the United States.

Dany Garcia confirmed the purchase on her official Instagram page by posting a few words:

And this all started with you saying, “Let’s buy the XFL”. 👏🏾
Here we go. #fortheloveoffootball

The XFL has been sold to a group that includes former WWE star Dwayne “The Rock’’ Johnson, giving the bankrupt football league the kind of star power that may draw even non-sports fans.

Johnson, an actor and producer who played college football at the University of Miami, teamed up with Gerry Cardinale’s RedBird Capital to buy the league just hours before a planned auction was scheduled to begin.

They paid $15 million, splitting it evenly. Johnson’s business partner, Dany Garcia, who is also his ex-wife, will be an equal stakeholder with him.

According to a court filing, this was the only qualified bid. The transaction is subject to bankruptcy court approval at a hearing this Friday, August 7 and, assuming that closing conditions are satisfied, is expected to close on or shortly after August 21.

RedBird has made a litany of sports-related investments, including some with ties to the National Football League and its players.

“I could not imagine a better outcome for the XFL. Dany, Dwayne and Gerry are the best possible ownership group for the exciting journey ahead, said XFL President Jeffrey Pollack, who oversaw the sale process for the league. “Their collective track-record of success in entertainment, sports and media is stellar, and I think our fans, players, coaches, and partners are in for something special.”

The XFL filed for bankruptcy in April after the COVID-19 pandemic prompted the cancellation of its inaugural season, which got off to a promising start in terms of television audience. The league had a broadcast agreement with Fox.

With live sports a reliable vehicle to deliver ratings, there’s a good chance a number of traditional TV networks—and perhaps streaming companies—would seek to add the XFL to their portfolios. Besides the league, networks would likely seek a tie-up with Johnson, who is the executive producer of “The Titan Games,’’ a sports competition reality series on NBC.

The XFL acquisition will allow the group the ability to option live entertainment intellectual property for further expansion across sports, live events and original entertainment programming.

The private equity firm is also an investor in the YES Network, the regional sports network that shows New York Yankees games, as well as On Location Experiences, which is partly owned by the NFL, and also OneTeam Partners, a tie-up that includes the unions that represent MLB and NFL players.

Garcia and Johnson are co-founders of Seven Bucks Companies, a multi-platform enterprise pioneering original content for television, film, emerging technologies and digital networks, and have been behind some of the most successful platforms in global entertainment.

In its bankruptcy filing, Alpha Entertainment, the XFL’s parent, listed the league with assets and liabilities in the range of about $10 million to $50 million.

The XFL drew more than 3 million viewers in its first week. The audience was about half that number in its fifth and final week before the shutdown.

The original XFL, created in 2001 in partnership with NBC, folded after one season.

Read More: The Rock’s Athleticon canceled for 2020…rescheduled for October 2021 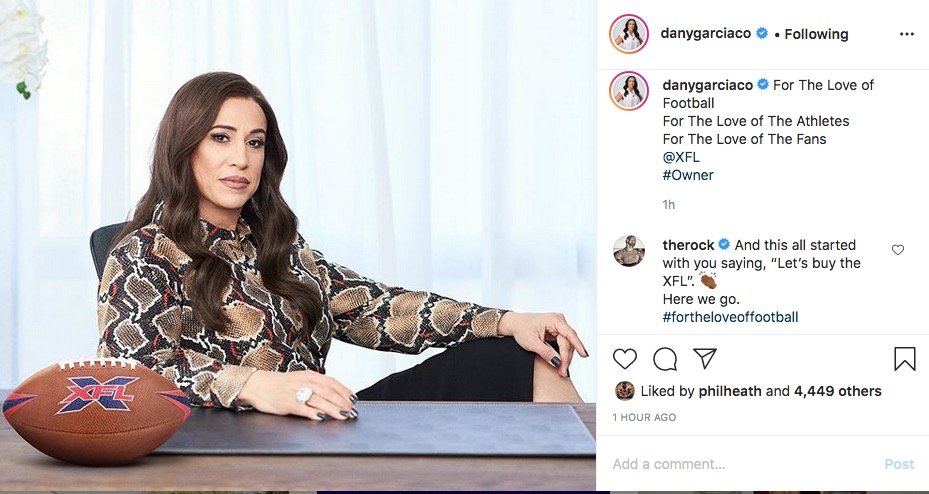