The Rock’s Athleticon – The facts and more.

The contest will take place a few weeks after the 2020 Olympia Weekend.

Evolutionofbodybuilding.net has been informed by reliable sources that Dwayne Johnson and Dany Garcia have been in talks with NPC/Pro League President Jim Manion about the event in recent weeks.

According to sources close to Evolutionofbodybuilding.net, the Athleticon event will host a NPC/Pro League competition that will most likely be a 2021 Olympia Weekend qualifier.

The Athleticon event is set to be a huge expo, making the Olympia Weekend and even the Arnold Sports Festival USA look small in comparison.

The buildup to the Athleticon event has already started to take place with Dwayne Johnson getting involved in more activities.

Dwayne Johnson is already a very busy man working on various films and TV projects, but just recently, The Rock has made a return to the wrestling ring.

Recently Fox TV and WWE reached an agreement with The Rock for a return to the Smackdown events.

While the move will invariably see Fox and the WWE increase viewership, it will benefit Dwayne more than anybody else.

With Dwayne ‘The Rock’ Johnson returning to the wrestling ring, this is a great way to indirectly promote the Athleticon event.

With the Rock having a great relationship with the WWE, it will not be a surprise if wrestling is part of the Athleticon event as well.

The Rock’s presence in the wrestling ring could be the start of the heavy campaign for the Athleticon event.

Thanks to our reliable sources, Evolutionofbodybuilding.net can reveal

The expo will be huge with over 800,000 square feet of space dedicated to the event.

The battle for sponsors

The battle for sponsors will be a complex affair with potential clients drawn by Johnson’s popularity.

The exposure for the sponsors at the Athleticon event will huge and it will be very easy for Dwayne Johnson and his partner Dany Garcia to strike a deal for the event to be aired on TV.

The Olympia organizers have openly said that they will support the Athleticon event, but they know that they have a battle on their hands.

Dwayne Johnson’s event will never replace the history of the Olympia, but as an event it can surely compete heavily with the Olympia Weekend.

According to our sources the Athleticon event has already brought in close to $9 million in sponsorship deals from just two companies. With just under a year to go for this event, this number will surely increase.

Athletes such as Dexter Jackson are on record saying that they are looking forward to this event and could possibly compete as well.

According to our sources, the prize money for Athleticon would be approximately over $1million to be spread over 8 pro divisions of men and women for the NPC/Pro League World Championships. This is a huge amount for the majority of the divisions, this will surely compete with the Olympia Weekend.

There will also be a NPC/Pro qualifier with eight pro cards available to be won and qualification for the NPC/Pro League Pro show taking place during the same event.

Dwayne Johnson has already easily matched the amount of the Olympia Weekend to attract the biggest names in the industry.

A number of epic competitions

The expo will cater to a number of world class competitions. Bodybuilding and fitness, The Worlds Strongest Man (USA vs Europe), WWE, Tital Games, Crossfit, UFC, Basketball and more.

Phil Heath did express his feelings about how he felt he was treated in the buildup to the 2018 Olympia Weekend. He felt the focus was on the other athletes defeating him rather than him possibly winning his eighth Olympia title.

A cash injection for the Olympia Weekend

Thanks to a major sponsorship deal from Jake Wood, the 2019 Olympia Weekend received a massive cash boost.

Dan Solomon and his team took over the production of the 2019 Olympia Weekend. They improved the event in every aspect.

Immediately after it was known Jake Wood was the man behind the sponsorship, the return of the Ms Olympia competition was making the rounds with various media outlets.

In 2013, the organizers of the Arnold Sports Festival decided to remove women’s bodybuilding as well. This division is still not included in the schedule of events with the Arnold Classic events.

At the 2019 Olympia Weekend, it was finally announced that the Ms. Olympia will return at the 2020 Olympia Weekend and this is thanks to Jake Wood himself.

The story of Arnold Schwarzenegger is well known. The bodybuilding legend arrived in the USA at a very young age with no money and a big dream. His dream was to replicate the success of his hero, bodybuilding legend Reg Park. Not only did Arnold match his hero’s success but he went on to achieve much bigger achievements.

Acting was the next step for Arnold who would become one of the biggest action stars that Hollywood has ever known. Even though he was told his name and accent would not help, they were both the main factors in his success.

As Arnold was laughed at when he said he wanted to get involved in politics, he proved everybody wrong again to become the Governor of California in 2003. If he could, Arnold would have surely tried to become President of the United States of America, but this was impossible due to the fact he was not born in the USA.

While Arnold was conquering everything related to film and politics, he managed to find the time to create one of the biggest bodybuilding and fitness events in the industry. The Arnold Sports Festival will celebrate its 31st Anniversary in 2020. Not only is the event popular in the USA, but it is now organized in Australia, Barcelona, Brazil and South Africa.

Dwayne ‘The Rock’ Johnson, his life life path is practically the perfect copy of Arnold Schwarzenegger’s.

Dwayne Johnson, left Hawaii to Nashville at the young age of 15.

Eventually, Dwayne would go on to follow in his grandfather and father’s footsteps, to become one of the greatest wrestlers in the history of the World Wrestling Federation.

As Dwayne gained popularity, his next step was to dabble in the film industry. As Dwayne was already popular on the television screen thanks to wrestling, this helped as he would become the next big name in action films.

Whoever is involved in the bodybuilding and fitness industry all can relate to this. If you are between 40 and 50, we all can say we grew up being inspired by stars such as Sylvester Stallone and Arnold Schwarzenegger through their blockbuster movies.

Johnson is Stallone and Schwarzenegger’s heir as he has become the richest and most popular film star in recent years.

When it comes to politics, Dwayne has expressed his feelings on a number of political matters and he has never excluded that he would one day enter the political world.

The next big project for Dwayne Johnson would be to create his own fitness expo. Dwayne managed to make his dream come true and the Athleticon event will take place in 2020.

The majority of posts on Dwayne’s popular social media is training footage and inspirational quotes related to bodybuilding and fitness.

Training with the biggest names in the bodybuilding industry undoubtedly helps Johnson increase his popularity when it comes to bodybuilding and fitness.

Moreover, his ex-wife and business partner Dany Garcia is an IFBB Pro as well, so relations with the NPC/Pro League will be an easy affair.

The Olympia Weekend and the NPC/Pro League – A complicated situation.

The top athletes in the NPC/Pro League qualify for the Olympia Weekend. These athletes compete against each other in various divisions to try to win the most coveted prize in the industry.

Since the Olympia Weekend is privately owned by AMI (American Media Incorporated), AMI or Jim Manion can cut off ties at anytime. What do we mean by this? Basically, AMI can literally get any other federation to sanction the event since they have the final say.

The proof of AMI’s power is when the 2018 Mr. Olympia winner Shawn Rhoden was suspended from defending his title in 2019 due to rape charges against him. Even though Shawn Rhoden is innocent until proven guilty, AMI still took the decision to totally eliminate him from the competition.

Even though the NPC/Pro League did not take any action against Shawn Rhoden, they had to bow their head toward AMI’s decision about their athlete.

As AMI has total power over the Olympia Weekend, this is just one contest, regardless the history behind it. Jim Manion has the power over the entire NPC and Pro League combined.

Dwayne Johnson can easily persuade Jim Manion to put all his focus into his Athleticon expo. Even though bodybuilding is not the main focus of Athleticon, it can easily become a championship that would see the best bodybuilders in the world compete against each other.

It would be suicide for Jim Manion to put the Olympia aside, but the business of bodybuilding is a crazy matter and money can change ideas easily.

Just as the Weider’s and Schwarzenegger have their name behind major bodybuilding titles, Dwayne Johnson can be next star to have a contest or title named after him.

Whatever happens, 2020 will surely be an interesting year for the sport of bodybuilding and fitness.

Evolutionofbodybuilding.net has sent questions to the representatives of Athleticon over a week ago, but they have not answered until publishing this article. 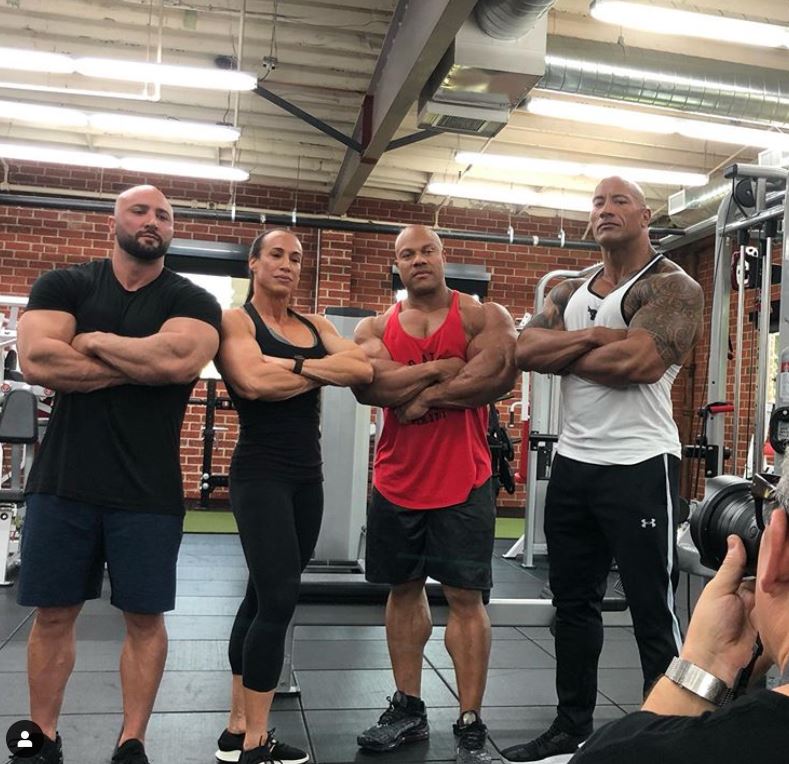 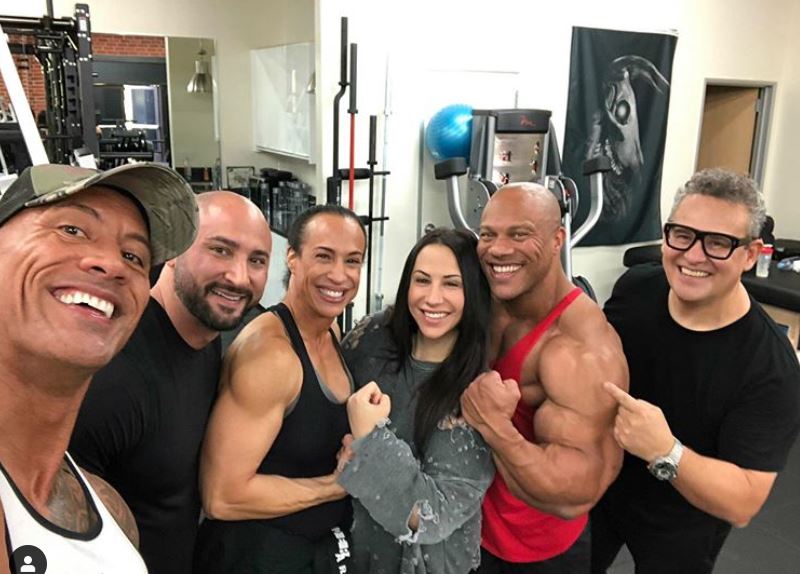