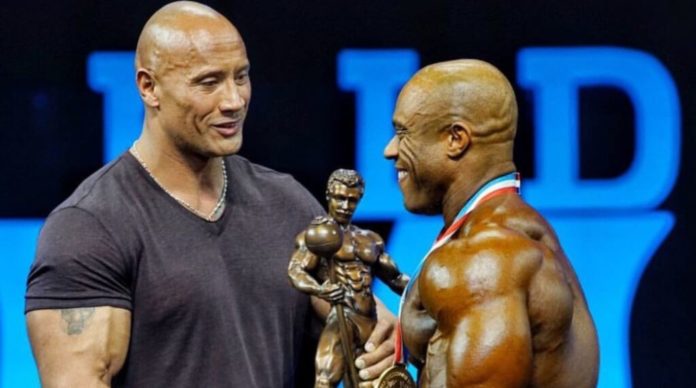 There have been a number of rumors regarding Dwayne ‘The Rock’ Johnson in relation to the sport of bodybuilding.

Evolutionofbodybuilding.net have been informed by a number of stories regarding The Rock, but we decided to step back and not report any news about these rumors since they were just that, rumors.

The sport of bodybuilding is going through a delicate stage, since the split in 2017 between the IFBB and the NPC/Pro League, the sport has been a bit unsettled.

The IFBB, headed by IFBB President Dr. Rafael Santonja has continued to grow all over the world and has just recently made one of Ben Weider’s dream come true by being present as a sport at the 2019 Pan American Games, a event affiliated with the Olympics.

As well the IFBB Elite Pro was created to replace the IFBB Pro League that they were once a part of, and this has grown to be very successful as well.

Looking at the NPC/Pro League (IFBB Pro League) headed by Jim Manion, they continue have a tight grip and popularity in the USA, Canada and Australia. As well they have a number of historic competitions in their amateur NPC league and as well pro contests such as the Arnold Classic USA/Australia/Brazil, New York Pro and the historic Olympia Weekend.

The NPC also created NPC Worldwide which organizes amateur shows internationally such as the Amateur Olympia.

It has not been the best year for the Olympia Weekend with the 2018 Mr. Olympia being charged for rape. The decision was taken by AMI’s David Pecker that he be suspended from the Olympia events. As well a number of injuries plagued some of the top bodybuilding stars.

Regardless, the Olympia Weekend is still a historic event and the best of the best from the Pro League will be competing at this event.

Getting back to The Rock, Nick Miller of Nicks Power and Strength has just recently released a video on Youtube revealing certain details regarding The Rock.

This all started with Dexter Jackson revealing information regarding a new show that is reportedly going to take place in Atlanta in 2020.

The show ‘The Rock Games’ is rumored to have much more prize money for the athletes.

Since Nick revealed this news, there has been a number of discussions on social media that The Rock is the savior of bodybuilding.

What is wrong, is that Nick continued to reveal rumors that really make no sense and is click bait.

First of all, the title of his video is ‘The Rock will take over the IFBB’, is totally ridiculous.

A title such as “The Rock’s new show will bring the IFBB Professional League to a higher level” would have made more sense.

As well, it is not the IFBB, it is the IFBB Professional League. The IFBB is a totally different federation that is headed by IFBB President Dr. Rafael Santonja.

Nick continued to report that The Rock wanted to buy the Olympia LLC, but this did not work out, so he decided to create a show bigger than the Olympia Weekend with more prize money.

And getting back to Dexter Jackson, we all know how much he loves money. He will definitely be the first to sign up for The Rock’s new competition.

The ridiculous piece of news that Nick reported was that the IFBB Professional League (Jim Manion/Eric Weider) are not happy with AMI, the owners of the Olympia Weekend, and they are planning to phase out the Olympia and bring in a new show, such as The Rock’s.

Dwayne ‘The Rock’ Johnson is a great person, he has a lot of money, he is very popular and he does attract a large amount of people wherever he goes.

Saying this, The Rock with all his money will never be able to to buy bodybuilding history. he will never take over the IFBB Professional League.

The Rock will never be able to replace the legacy of Joe and Ben Weider.

The Rock with all his money will never compete with the Olympia, regardless how much prize money he hands out.

Not even Arnold Schwarzenegger with his legendary status has ever dared to replace the Olympia Weekend.

This news coming from Nick Miller is quit shocking considering he has also signed a contract with AMI and Olympia LLC as a ‘Media Influencer’ for the 2019 Olympia Weekend.

So literally instead of working to promote the Olympia Weekend while they are going through a delicate period and help Vice President and Chief Officer Dan Solomon, Nick has decided to spread these crazy rumors.

With all these rumors spreading, the pressure is now on The Rock and his company, the show must happen or he will look like a joke.

Reporting on what Dexter Jackson said would have been good enough, but taking it further was the mistake made by Nick.

The phasing out the Olympia because the IFBB Professional League are not happy with David Pecker and AMI are nothing but rumors and comments that will truly destabilize the Olympia Weekend.

Surely, Nick will have to answer (or has already) to the powers that be within the AMI and Olympia LLC for his comments.

We can add this, according to our sources, Jim Manion is not happy with Dexter for revealing this news regarding the new contest. Discussions have been going on for a number of years and nothing is confirmed yet with The Rock.

To end this, whatever The Rock does, he will never replace that moment an athlete lifts the Mr. Olympia Sandow Trophy.

Winning the Sandow trophy is not just about money, it is history. It is the same trophy a select few have managed to win.

Below are the videos of Nick’s revelation of all the false rumors, Nick signing his Olympia contract and as well Dexter Jackson revealing the news of Rock’s new show.