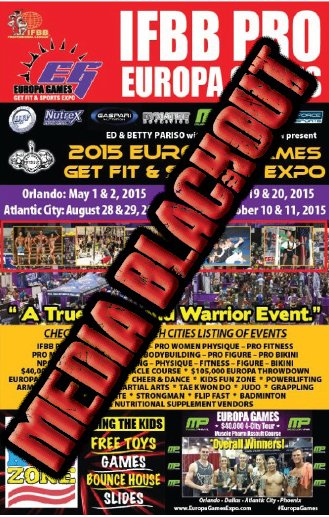 The Europa Show Media ban saga is not over yet.

If some of you don’t know what is happening, our friends over at RXMuscle.com were refused a press pass to this event as promoter Betty Pariso said that they will be using their own social media and website to promote and cover the event.

This is what she had to say:

Let me first clarify that we are not banning all press from our Europa Games. However, we are being selective as to who receive [sic] the limited number of press passes.

The Europa Games has a partnership in place with Muscular Development, and they are on the approved media list.

We also encourage the local TV and print media outlets in each city to obtain media passes.

In addition, Vision Star Entertainment has acquired a media outlet which will has [sic] exclusive rights to our Europa Games content.

We have moved in this direction for a several of reasons… [sic] among the top is that we have contractual agreements with our sponsors, and we want to make sure that we are honoring those contracts in regards to title sponsors financially supporting the Europa Games.

In the past, the on-line [sic] websites that have posted the results of our event have not considered these agreements and it has become a concern for the Europa Games.

Another objective is to be the first to post the results of our own events, and this will also guarantee that the title sponsors who are financially supporting the event get recognition. Therefore at this time we are limiting press passes that might hinder these objectives.

After reading this response from the promoters, it makes you wonder why the hell somebody would cover this event??

Please take note, we are not crying over this as we have tons of other subject to cover while this event is going on.

Ok, MD, Flex, Muscle & Fitness and NPC are the heavy weights of the industry, but they are not the only ones out there. We have great respect for these companies, but we must have respect for others such as RXMuscle.com, Musclesportmag.com and the others taking the time to promote this sport that only a few love compared to other sport disciplines!!

evolutionofbodybuilding.net on many occasions have published results before any of these sites. Not to mention a particular site, but some of the mentioned are rarely updated, and if they are, they are updated with an official article with no criticism whatsoever.

Yes, evolutionofbodybuilding.net is a small site, but after just over two years climbing this mountain of bodybuilding media, we are still here and managed to survive!! After a ton of refusals from many companies and athletes, of all people, Kevin Levrone picked up the phone and called us and gave us his full support and we are surely showing our gratitude for this!!

We are not part of the big four, but we are happy to be eating away at this big cake that nobody wants to share….

As last year, during the Olympia Weekend, we will be teaming up with one of the only newspapers in Europe that covers bodybuilding. And most probably as last year we will have top rankings in Google with the powerful presence the newspaper has on the internet. So expect the best coverage possible from evolutionofbodybuilding.net for future events… minus the Europa Show!

So remember Betty Pariso and the rest of the Europa Show, its your loss not ours!