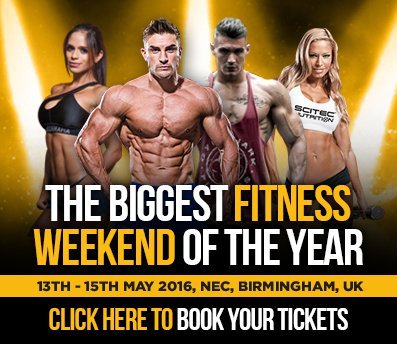 World class athletes, the biggest and best international brands and a healthy dose of education and motivation – it’s all crammed into the ever-popular BodyPower Expo

Over 90,000 visitors are expected to descend on the NEC, Birmingham, for the eighth annual instalment of BodyPower Expo – Europe’s largest consumer fitness expo.

Midlands-based global fitness media business, BodyPower, has been on a consistent upward trajectory since its inception in 2008. Year-on-year footfall increase at their staple event, BodyPower Expo, led to rapid expansion of the brand including a successful enterprise in India and brand ambassadors on every continent.

Armed with their hugely successful new bodypower.com website – a hub of online fitness content – the brand is gearing up for an incredibly busy month as the expo looms large on the 13th to 15th May.

Visitors are treated to a relentless 3-days, celebrating everything positive about fitness and power sports. With more than 400 leading international brands and hundreds of the most revered athletes on the planet – BodyPower is a staple event on the global fitness calendar.

Some of the names confirmed for 2016 are phenomenal. Bodybuilding megastars Phil Heath and Kai Greene are perhaps the biggest name on the roster, and they are joined by female sensations Paige Hathaway, Michelle Lewin and the irrepressible Dana Linn Bailey, boasting over 15 million followers between them. Martial arts guru and actress Zara Phythian will be of huge interest to that market, whilst the bodybuilders such as record-breaking 8x Mr. Olympia Ronnie Coleman and debutant Big Ramy will all command eye-watering queues.

Physique remains a burgeoning area of the show, with stars like 2x Mr. Olympia Physique Showdown winner Jeremy Buendia making his BodyPower debut as well as regulars like Britain’s Ryan Terry and stars like Steve Cook ever-popular. Online sensations aren’t ignored – with the likes of Nikki Blackketter, Christian Guzman and Gymshark’s Lex Griffin all posting to millions on a daily basis.

No matter what type of visitor you are, it’s impossible to peruse the packed BodyPower aisles and not find inspiration. Those with a thirst for knowledge can see seminars from the likes of Phil Learney, Jamie Alderton, Martin MacDonald and Phil Graham, and each session, signing, Q&A or meet and greet is an opportunity to grab a photo or a titbit of precious advice from an idol.

Ex-Playboy model and NPC Bikini megastar Michelle Lewin commented: “I’m really excited to finally be able to make it to BodyPower after not being granted entry to the UK last year due to a visa mix-up. I’ll be coming with Fit Fuel and I’m going to get a chance to meet my UK fans who inspire me and motivate me.”

Part of the BodyPower experience for visitors is the features – and 2016 will be no different. Take a look at some of the top features on offer for visitors and what each one is all about:

Workout Arena – the jewel in the crown, see live workouts from international megastars

The Academy – world class education from some of best coaches, trainers and educators on the planet

Add to that there are a number of the biggest and best competitions in Europe taking place on the show floor throughout the BodyPower weekend, open to all ticket holders, there’s a real buzz anywhere you look at the event. Take a look at the highlights:

IFBB BodyPower Pro Show – some of the best in the world compete in this bodybuilding extravaganza for the chance to compete at the Mr. Olympia contest in Vegas

Year after year BodyPower visitors cram into the NEC atrium with queues measured at over a mile in 2015. Tickets are advised to be purchased in advance to avoid disappointment – but fans seem to relish the chance to stand with like-minded fellow fitness enthusiasts sharing training tips and enthusing about the athletes in the show creating an air of positivity that is unrivalled by any other expo.

BodyPower CEO Nick Orton commented: “Every year the show seems to come around quicker and quicker. We certainly don’t rest on our laurels, and I think after bringing Hulk Hogan to the show last year we’ve upped the ante once again by bringing the likes of Big Ramy and Jeremy Buendia.

We work extremely hard behind the scenes to ensure the visitor experience is spot on, and we take on board the feedback we get from our visitors every year. The show is immense in size and I’m confident that we’ve got all our planning right so that we deliver 3 days of brilliant entertainment, education, motivation and inspiration for every visitor.”

For the record number of fitness enthusiasts who have already purchased tickets and the thousands more planning to pay on the door, BodyPower UK 2016 is now on the horizon. The show is billed as the biggest and best event to date.

Standard tickets for BodyPower UK 2016 are now available from as little as £25.00.