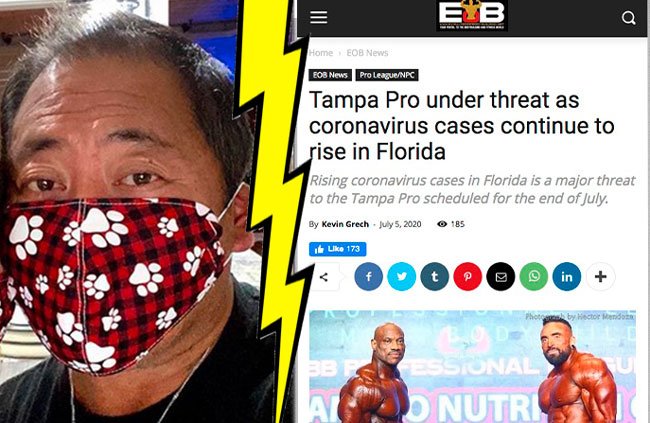 The bodybuilding and fitness world never ceases to amaze me with the reactions after a valid story is published or an opinion is expressed.

In all other sport federations or leagues, good articles and opinions are what the fans and even the athletes look forward to.

When it comes to bodybuilding and fitness, it seems that promoters and some athletes seem to get offended when the facts are presented.

I (Kevin Grech) have been reporting on a number of events in the last couple of years. Some of the articles did not go down well with numerous people from a certain federation. Even though the facts were presented with documents, the haters still denied the true facts.

I decided write about the Tampa Pro that is taking place at the end of July 2020, highlighting the spike in coronavirus infections in Florida.

Read the original story: Tampa Pro under threat as coronavirus cases continue to rise in Florida

Before publishing the article, I sent a short message to Tim Gardner asking for his opinion on the matter. He did not answer.

As usual, the tight circle of friends from the NPC and Pro League always refuse to answer any questions from Evolutionofbodybuilding.net.

Is it because we are the only website that covers the IFBB, IFBB Elite Pro, NPC, Pro League, GBO and Nabba?

Do the NPC and Pro tight circle of friends refuse to talk to me because I am very close friends with IFBB President Rafael Santonja, NABBA representatives and GBO representatives?

Am I (Kevin Grech) such a threat that nobody wants to talk to me? or is it that I am not scared to reveal the real stories without hiding or being threatened not to get a press pass to a Pro League show?

After publishing the article on Sunday, Tim Gardner decided to label my article ‘misleading propaganda’ on Evolutionofbodybuilding.net’s official Instagram page.

It seems Tim Gardner did not take the time to read the title of the article “Tampa Pro under threat as coronavirus cases continue to rise in Florida.”

The article is not misleading. Is it such a crime to discuss what is happening in Florida at the moment with the spike in coronavirus cases?

Is it misleading to put the athletes and fans health and safety before any show?

An interesting point that Gardner made was this: “There are no discussions to not showcase the hard working efforts of our IFBB Professional League & NPC athletes. Tim Gardner Productions will not disappoint them come Hell or high water. The National Guard would have to barricade us out to shut the show down.”

What is Gardner trying to say here? Is he actually saying whatever the case the show will go on? What about the health and safety of the athletes and fans?

We would love to see the show go on as planned… but the safety of the athletes and fans have to come first.

Why does Tim Gardner have to get so offensive just because a media outlet stated some valid points about the situation at the moment.

Even Dwayne Johnson cancelled Athleticon. I published a story about the possible cancellation of Athleticon, one month before it was actually made official.

Dwayne Johnson or his company did not threaten me or call my site fake news. I stated valid facts!

While we are at it, let’s talk about the facts.

I can guarantee, if the media outlets that only cover NPC and Pro League events published the same story, Tim Gardner would not have said one word… why? Because of the tight circle of friends… the friends of friends.

Calling me out on my our social media pages will not discourage me. To be honest, I was relaxing after a days work and after reading Gardner’s ridiculous comments I immediately decided to write this article.

And why would I retire Gardner’s name from my article or future articles? If Tim does not like the heat… he can leave the industry.

Would the NPC/Pro League loyalists do the same, absolutely not… why? Because they are scared that they will have their press pass application declined or get black listed from advertising.

Well, we all know the saying “The Truth Hurts” and in this case, it definitely does.

Read the original story: Tampa Pro under threat as coronavirus cases continue to rise in Florida

Mr. Kevin Grech, amazing what you can come across on social media these unprecedented days – For your information, the 13th annual Tampa Pro-Am is under NO threat. Why would you imply such a thing? There are no discussions to not showcase the hard working efforts of our IFBB Professional League & NPC athletes. Tim Gardner Productions will not disappoint them come Hell or high water. The National Guard would have to barricade us out to shut the show down. Full details to comply concerning audience & athlete safety will be exercised diligently. Tampa is in central Florida, not Miami. Not sure where you are gathering your facts. Maybe the same person who supposedly reached out to me for comment? Please take down your misleading propaganda and retire my name from your journalistic attempt to be relevant.

@tgflex has said I did not take the time to ask him about the possible cancellation of the Tampa Pro because of the spike in coronavirus cases.
The screenshot is proof I did contact him. I admit I did not go into detail because I know he would not answer, but he rather try to shame me on my social media.
I never said the show is cancelled, I said it is under threat. If @tgflex seems all is good to go on with the show… good for him. But the health and saftey of the athletes and fans comes first. – Kevin Grech 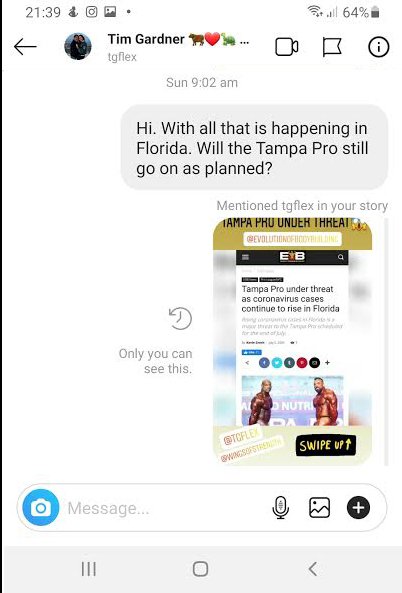