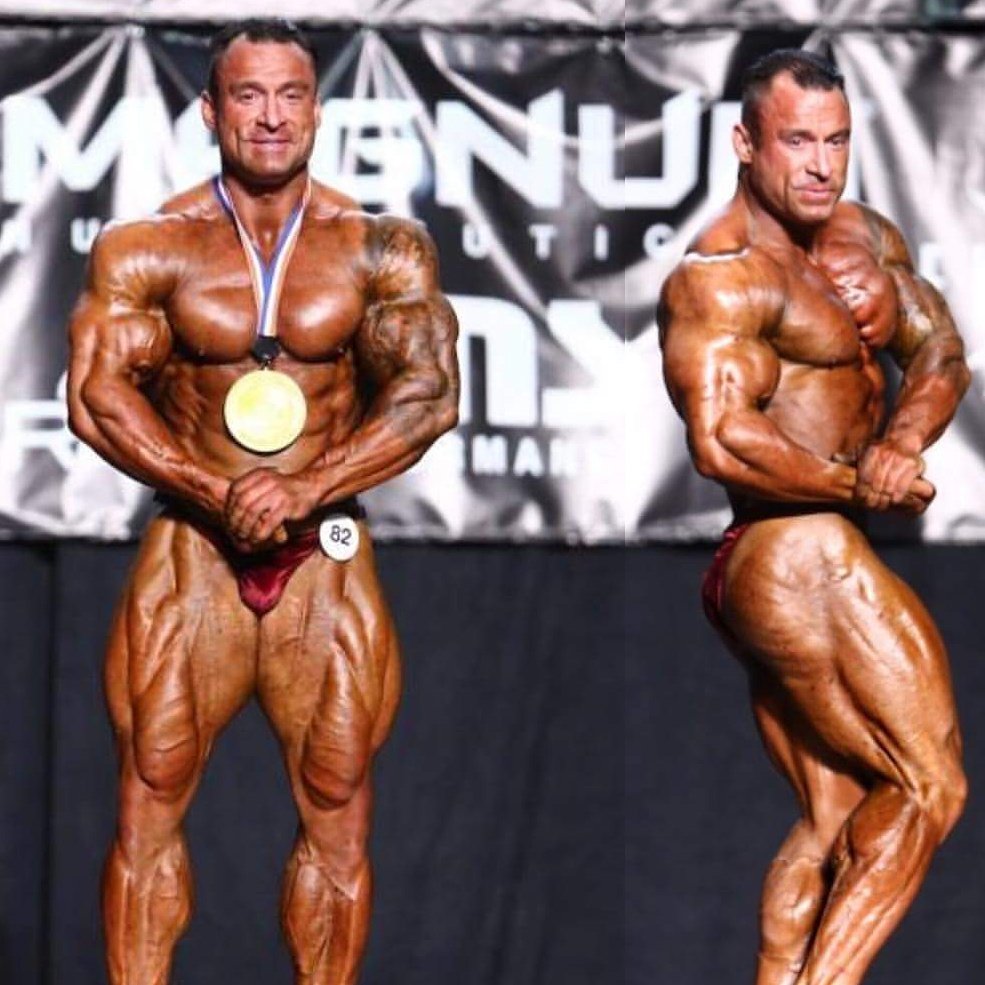 Evolutionofbodybuilding.net contacted Riley immediately after his victory to ask him a few questions about his career and what he has planned for the future.

First of all I would like to say thank you Riley for accepting this interview on www.evolutionofbodybuilding.net

Riley, before we get into what is next regarding competitions. Can you tell us a bit about yourself?

When you started bodybuilding, when did you know that one day you can possibly be a IFBB Pro one day?

I did my first show back in 2011. I had a few buddy’s from the gym that competed and they would always said “hey you should really compete , you would do well”. So one day I just made the decision to give it a shot. I ended up winning my class and also winning the overall title. Right then I knew this was for me and I was hooked. I always knew deep down that I had something inside me that most of the other athletes didn’t. So i put my head down and just went to work.

Being a Canadian, do you think it is a bit harder to have a career as a professional bodybuilder? Do you think you have to train at Golds Gym Venice California to make a name for yourself?

I think right now Canada is producing high caliber pros and the quality of the national level bodybuilders is getting better yearly here. With that being said I don’t think that Canada gets the same exposer as the American athletes do. The market share in the U.S is just so much larger than here that most companies don’t even look north of the boarder.

I also believe that surrounding yourself with the best only makes a person better in all aspects. So with Golds Gym Venice or whats going on down in Florida or over at the Oxygen Gyms I do think that those environments definitely breed great bodybuilders, and that’s evident by the guys that are coming out of those places right now. But do i think you NEED to live/train at one of those places, of course not.

Your profession, is it just bodybuilding or do you have another career?

I consider myself an entrepreneur and I am always thinking of new business ventures. Currently I own a gym in Downtown Edmonton, Alberta.

How many years have you been trying to earn your IFBB Pro card?

Are you a one man show or do you have a personal trainer and dietitian?

Haha I’m definitely not a one man show. My good friend and IFBB Pro Ron Partlow has been looking after my contest preps since 2011.

How does the last couple of weeks of a contest diet effect you? Do you handle it well?

For me, I love dieting. My energy levels are high and my daily production increases a lot. Of course we all have our days but on a whole I personally don’t mind dieting one bit.

This year my favorite cheat meal was 2 two Five Guys burgers with fries,  and a ton of ketchup, gotta have ketchup. Typically I would eat this twice a week during the contest prep.

Can you give us an idea about your daily routine regarding diet and training?

I always say that my diet and training while in contest prep is like Groundhogs Day. The same foods and routine for the most part daily. 6 meals a day depending on where I’m at, and I typically train 6 days a week during contest season. I like to train mid to late afternoon and like to get in at least 3 meals  before then. I find my workouts are more intense and my body feels warmed up and ready to work.

What is next on the agenda? Do you have any Pro shows planned for next season?

To be honest I haven’t really put any thought into when I’m going to do a pro show yet. Right now I am just giving my mind and body a well needed break then iI will be right back at it grinding away.

Every bodybuilder has had somebody to look up to for inspiration. Who did you look up to when you started out and why?

I have always admired bodybuilders like Dorian Yates, Kevin Levrone and Flex Wheeler. The 90’s had some crazy physiques and all those guys always brought it every time they stepped on stage. What I love the most is those were the days before social media and to be a professional bodybuilder you really had to love the sport, and do it for your own reasons and for social media fame.

Do you think more IFBB Pro shows should be held in Canada? Such as a Arnold Classic Canada?


I would love to see an Arnold Classic Canada, But I also think there has to be a draw to get the top level Bodybuilders in the world to come and compete and that comes down to money and exposure. I hope that Canada can keep promoting its Pro shows and keep them growing yearly.

The future of bodybuilding. How do you see bodybuilding in the next 10 years? Do you think the bodybuilders will start getting bigger or will the look of the 90’s come back?

I think its already starting to come back to physiques of the 90s. I am a huge fan of conditioned and dry/hard physiques so I hope it continues towards that of the 90’s.

What do you think of the Classic Bodybuilding category?

What do you think of Kevin Levrone’s comeback? Will he place in the top ten at the Olympia?

Your predication for the 2016 Mr Olympia and the 212 Olympia.

Who are your major sponsors? And how can fans follow you on social media?

Currently un-sponsored
Instagram: rtjanzen
Facebook Riley Janzen
I would like to say a big Thank You again Riley for taking the time for this interview. Hope to see you on the IFBB Pro stage soon representing Canada.
[wpsgallery]