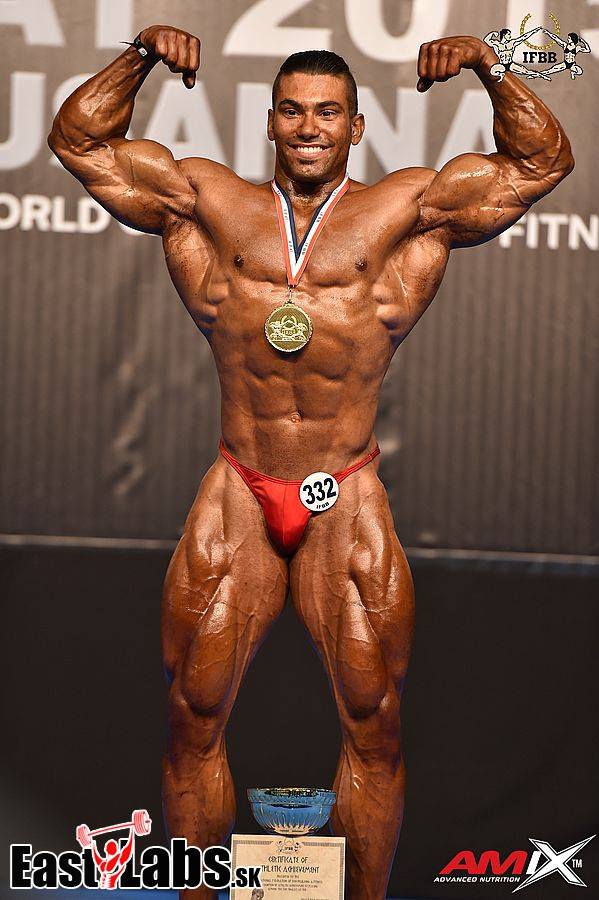 Evolutionofbodybuilding.net are honored to have the opportunity to talk to Luke Debono, one of Europe’s fastest rising stars in the bodybuilding  scene.

Can you tell us a bit about yourself? And what convinced you to start the sport of bodybuilding and eventually step on stage.

I am a very sporting person by nature. My mother probably was the person who inspired me to be engaged in sports from a young age, being a soccer goalkeeper herself I remember her spending time with me and my brother in the yard kicking a football around from a very young age. At around 12 years of age after practicing some different sports I was playing regular water-polo in the second division until the age of 17. At the age of 14 I had started attending a regular gym to aid my physique in being more appropriate for playing water-polo. A local gym instructor and now a dear friend encouraged me to take weight training seriously and so far I am not regretting it. I retired from the National water-polo U19 squad in 2010. My first national competition came in 2011 and I did it more out of curiosity than a real intrinsic wish to compete. I was 18 at the moment. I ended up winning the junior category, novice category and placed third with the -90kg class. I did not place in the overalls. This was when I started considering Bodybuilding as being a possible successful sport for me.

Is bodybuilding the only sport you practice?

No, certainly not, I enjoy 5 a side football games with university mates and also enjoy practicing swimming and a causal water-polo match in summer although both not competitively.

In such a short time, you have become one of Malta’s best bodybuilders in recent years in the IFBB. Former champion and now Malta Federation of Bodybuilding and Fitness (MFBBF) President Ralph Decelis was the last competitor to dominate the bodybuilding scene, remaining unbeaten locally. Now it seems you will be dominating the local bodybuilding scene for years to come. How do you feel about this accomplishment?

I feel great to have gained the Maltese title. However I am not a person who plans my far future. Right now I feel good about my form and my training regimes and I will continue to aim for improvement just like any athlete would. I avoid thinking about my future because it can easily put me off track and deviate me from more present and important things.

You have been compared to some of Malta’s bodybuilding greats such as Charlie Duca, Jonathan Satariano, Dominic Schieda and Ralph Decelis. Do you feel you can be one of the greatest bodybuilders Malta has ever produced after winning the 2015 Overall IFBB European Junior Class?

I have great respect for all these great athletes you have mentioned. They came into a time of their own and had their own astounding successes. I feel that I am nobody to compare and contrast such bodybuilders especially with myself being a relatively newcomer. Winning the European Junior Title has definitely boosted my credentials but no bodybuilder can ever be compared with another especially bodybuilders of different ages. How can you compare van Gogh with Picasso, or Caravaggio, each athlete presents an image of his or her own and exclusive to him or herself. It is the beauty of the sport to exhibit difference and variety, 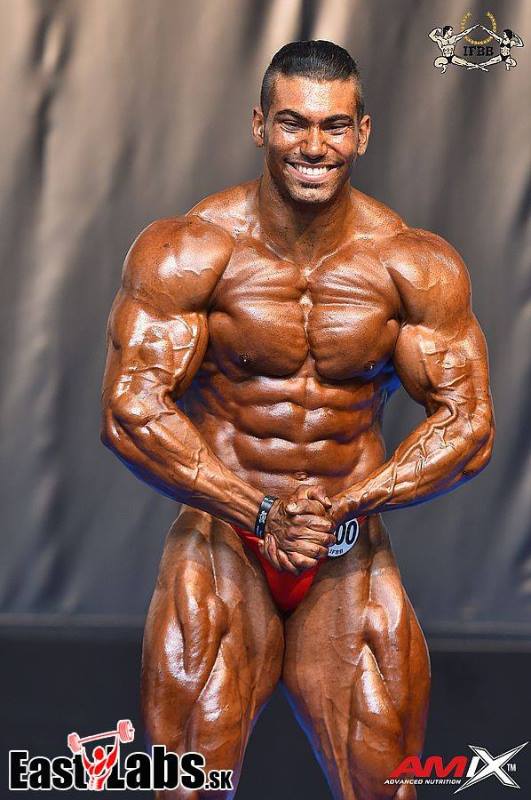 In recent years IFBB-MALTA (now MFBBF) former President Mario Pace and now President Ralph Decelis have turned the association from a small local bodybuilding event into being a contender in the international scene. To mention a few, Ralph Decelis and Blanche Coppolla have won the Mix-Pairs IFBB World Championship and Raymond Cassar has been placing in the top three in the Masters class on many occasions in Europe, and now add your accomplishment. Do you see the MFBBF becoming a dominant force in Europe?

We must be realistic. Because of our small population size we can never overcome the might of other federations such as Germany, Turkey, Spain and Russia, not to mention all the powerful eastern European countries. However, yes I definitely agree, as so do many dilettantes and followers that the federation is currently in its best time ever and possible that is to improve even further with the increased interest and response from local athletes.

Let’s talk a bit about your future. You are the European Champion in the Junior class. What are your goals now? Do you think winning an IFBB Pro card is something that you can accomplish?

Right now I must sit down with the committee members and we must together see what possible options I have ahead of me. I am not one to rush things especially in a sport with a long career life. I am still young and trying to bite too much than I could chew could end up being detrimental rather than beneficial for my career. A pro-card is a big deal, it requires great preparation over long periods of time. Obviously it is a possibility which can become a reality in the future, just like winning the Europeans was once also a possibility and a mere idea.

Seeing you progress in recent years, it seems you have only touched the tip of the iceberg with your great genetics. Do you feel you can continue your progress? Or do you need to focus on other things such as school, work, etc…?

At the moment I am weighing my options. So far I am very proud and pleased for the Gold medal. Obviously with more progress, greater results would follow, however I also invest and continue to build on my sport studies and further my education which would also help me in achieving greater knowledge and results for Bodybuilding itself.

Are you planning on competing at any other European IFBB shows, such as the Arnold Classic Amateur or an IFBB World championship?

I have yet to decide about any other competitions for this year. The Europeans are still fresh in everyone’s mind and rushed decisions never benefitted anyone.

Obviously your family backs you up 100% as such an achievement is not possible without such support. How do they feel about you practicing the sport of bodybuilding? For example food prep, diet, support, etc.

It is hard for them to go through the dieting phase and the moods that contest preparation brings with it. However they do support me with all their efforts and for that I am very grateful.

Can you give us a basic example of how you train? The amount of days during the week and how many times you train each body part per week?

Usually my off season includes 2x a day training and the contest preparation phase included 3 to 4x a day weight training. Usually I hit each body-part twice both in off and on season.

Do you prefer training alone?

Yes I do enjoy training alone because it leaves me room to be flexible and adaptive without holding anyone back.

Do you combine cardio in your workouts? Or do you do cardio just before a competition?

Specific bodybuilding cardio is something I do not do. My cardio comes from other activities such as football or swimming. 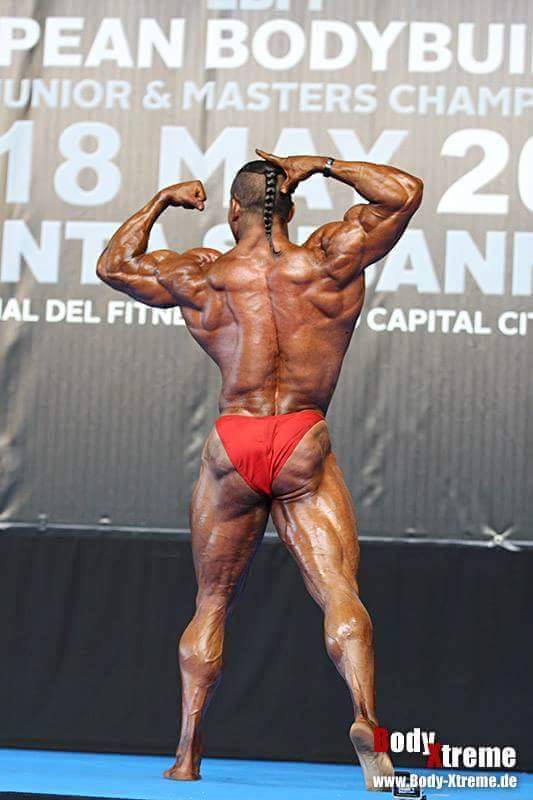 Regarding diet, what is your daily routine regarding preparation and the amount of times you eat?

I usually consume 6-7 meals a day, since I get up very early and sleep quite late I regularly have 7 meals a day. Preparation takes place the night before and the micro-wave does a good job in minimizing cooking times.

Were you a fan of bodybuilding before you started training?

Not really. However I do respect and always admired the sport and its ordeals very much though.

Who is your favorite bodybuilder?

I have nobody specific that I admire mostly. I have an image in my mind and I try to achieve, work and sculpt my body into that shape, probably that body would be my favorite bodybuilder.

Each age has its own classical shapes and icons, probably the 90’s look appeals mostly to me.

Again, I have no idea of a single athlete in mind.

The size of professional bodybuilders has been a hot subject lately. Arnold Schwarzenegger has even commented on the matter at the 2015 Arnold Classic. Do you think a more streamlined look such as Arnold Schwarzenegger, Frank Zane, Kevin Levrone, Shawn Ray, Flex Wheeler, etc should come back or do you prefer the look of the so-called ‘X-Men’ of modern times?

I think that no matter what people say they want to see, what is giving athletes gold medals will remain favorite amongst athletes themselves. Once the judging world starts shifting their results onto different styled bodies with less belly thickness, then I would expect a comeback of the previous shapes. The judging must make the first move. Otherwise the status quo will remain.

Who do you think can come close to dethroning Phil Heath for the Olympia title?

Right now Phil Heath is cruising and the rest are following. I can only see Phil retiring as an unbeaten champion at the moment. 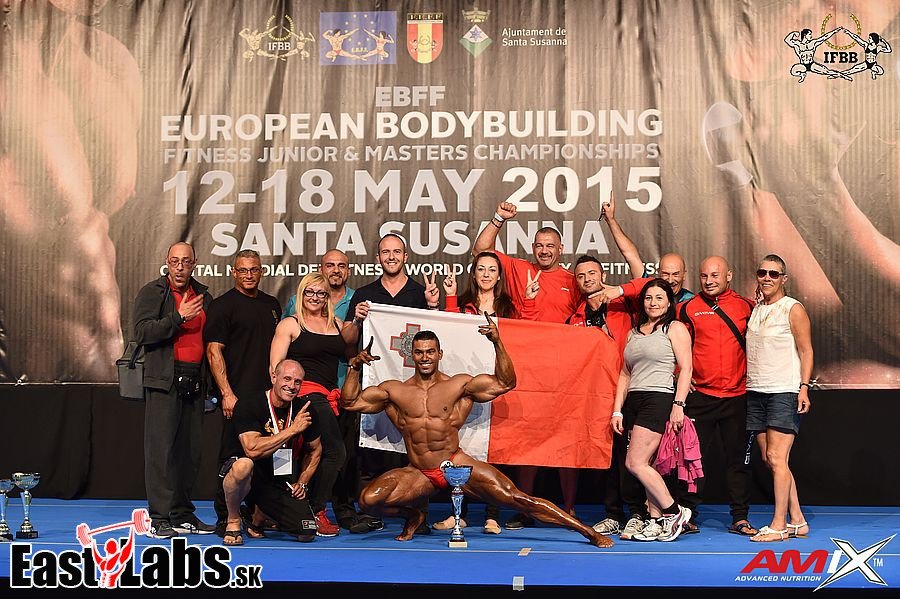 As we mentioned before, this sport requires lots of support, would you like to mention anybody?

The MFBBF Malta is a great source of encouragement, logistical aid, financial support and help. Also my family plays a vital role, from my mother who tans me to perfection on contest days, to my brother and dad who regularly keep me focused and mentally sane.

Thank you Luke for taking the time to do this interview. Evolutionofbodybuilding.net wishes you the best of luck for the future!! May you move onto bigger and greater accomplishments!!

Evolutionofbodybuilding.net would also like the thank Malta Federation of Bodybuilding and Fitness President Ralph Decelis for making this interview possible

the moment of truth!!

Here is the routine that brought GOLD home 🙂 Listen to you guys and girls!! All that support is priceless on stage!! Thanks!!