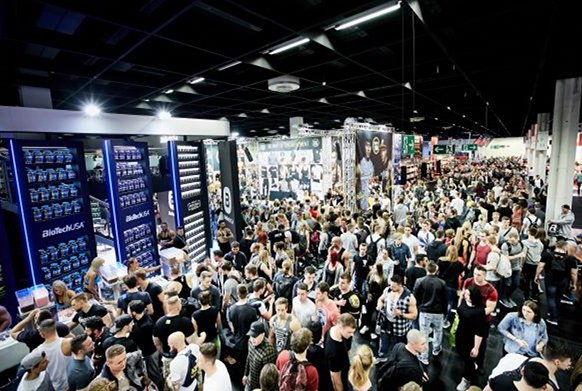 More than 150,000 visitors descend on Cologne

The “BO” in FIBO could also stand for the BOOM of the industry and the trade fair right now. Because the Leading International Trade Fair for Fitness, Wellness and Health once again underscored its exceptional position around the world by setting new all-time records. A total of 153,000 visitors came to Cologne, including 83,000 trade visitors from more than 100 nations.

With an exhibitor increase of 32 per cent, a floor space expansion of 23 per cent and a 12 per cent visitor boost, organiser Reed Exhibitions Deutschland recorded another huge growth spurt.

A total of 960 exhibitors (prior year: 725) presented current fitness and health industry trends and innovations on an area of 160,000 m². With 153,000 visitors (prior year: 136,000), including 83,000 trade visitors, FIBO continued to expand its role as the leading international business platform. On the weekend, when the Exhibition Centre Cologne opened its gates to fitness fans, the show turned into a soaring success. As in years past, FIBO had already been sold out for private visitors before the trade fair even started.

“Right now, FIBO is among the world’s leading trade fairs with the best growth momentum. Simply a fantastic development”, says Hans-Joachim Erbel, CEO Reed Exhibitions Deutschland. In the span of four years, since the move from Essen to Cologne, FIBO doubled both the number of visitors and the floor space; the number of exhibitors grew by a respectable 57 per cent during the same period.

If one asks FIBO Event Director Ralph Scholz for the “why”, he’ll credit four central reasons with creating this dynamic: “First, the market continues its positive development with increasing demand, second, powerful trends and innovations, third, gains from the international segment, and fourth, the continued advancement of FIBO by Reed, which is having an ever-greater impact.” By way of example, he lists the positioning of the three areas FIBO EXPERT for trade visitors, FIBO PASSION for active workout enthusiasts and consumers, and FIBO POWER for the bodybuilding, weight training and martial arts community.

EuropeActive Board Member Herman Rutgers pegs current growth in the European fitness market at 4.9 per cent when taking into account the sales of the altogether 51,200 fitness studios in Europe, a figure that reached €26.7 billion last year. Some 52.4 million people are members of gyms at this time, according to the latest Deloitte study presented at the 3rd European Health & Fitness Forum in Cologne. A representative study conducted by TNS Infratest and commissioned by The German Industry Association for Fitness & Health (DFIG), among others, found that 10.8 million people actively exercise for fitness reasons in Germany right now.

Completely in line with the latest trends

Some of the hottest trends are technical innovations, digital offerings and personalised training units. This year’s FIBO was well-aligned with these themes, even dedicating an entire hall to EMS (electrical muscle stimulation) for the first time. The FIBO visitor survey revealed that nearly one in six trade visitors have plans to invest in this area. Still ranking high are functional training, group fitness choices, and strength and cardio training. Almost one in two FIBO trade visitors came to Cologne with concrete investment plans. One in seven said they’re planning investments of more than €200,000, seven per cent even of more than half a million euros.

By garnering lots of media attention, FIBO was able to raise awareness for fitness and health among broad swaths of the public. Nearly 1,000 accredited journalists from 32 countries reported “live” from FIBO, including all German TV stations, news agencies, numerous radio stations and daily newspapers, as well as online services, “YouTubers” and bloggers.

The next FIBO will take place at the Exhibition Centre Cologne from 6 to 9 April 2017.

Note: FIBO’s visitor, exhibitor and floor space figures are calculated and certified according to the uniform definitions published by FKM – German Society for Voluntary Control of Fair and Exhibition Statistics.