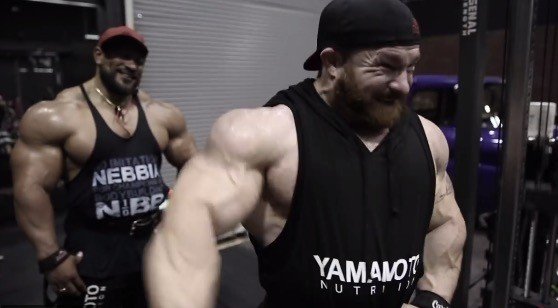 The excitement of the 2018 Olympia Weekend has started and Flex Lewis has started his prep to defend his title and win his seventh 212 Olympia title.

Flex did not start his Olympia prep alone, he had a special guests make the trip to Florida.

This is a great high quality production thanks to Flex and his team.

On the anniversary of Dallas McCarver passing, Flex Lewis and his training partner Frank “Wrath” McGrath train arms at the world famous Dragon’s Lair gym.
The Champ’s energy is low at best, and on the first anniversary of his (Dallas) passing its a harder workout than any other. With his death looming and reminders everywhere from Social media to fans messages, his phone was tuned off for the day and the choice to train and keep moving was turn on. This is reflective to why Flex is the man he is, this workout was Dedicated to Dallas RIP we all miss you!