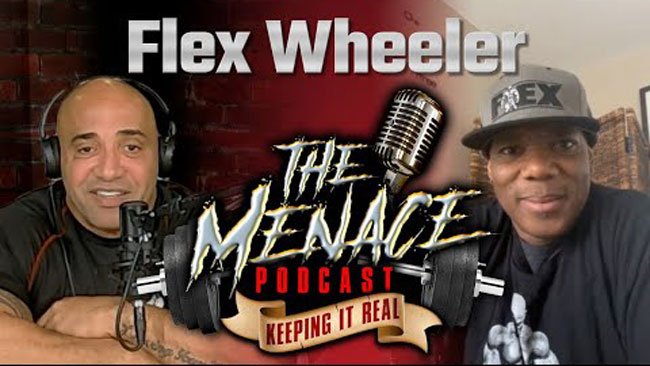 Flex Wheeler talks about his career, steroids and life after amputation.

Bodybuilding legend Flex Wheeler did not hold back in his latest interview with Dennis James on “The Menace” Podcast.

Flex Wheeler is one of the greatest bodybuilders to have ever grace the bodybuilding stage.

Even today, many bodybuilding historians and fans cannot believe that he did not win at least one Mr. Olympia title.

During his bodybuilding career and life in general, Flex went through hell and back with all his medical complications due to blood clots, kidney failure and recently having part of his leg amputated.

The majority of the bodybuilding world are well informed about Flex Wheeler’s kidney problems and his recent amputation, but not many are aware of what happened in between these life threatening medical problems.

Even when he most probably had the best bodybuilding physique in the history of the sport, Flex believed that he was not good as his fellow competitors.

Flex Wheeler started his competition career as a natural bodybuilder, but as he started to get more involved in the sport, he started to experiment his performance enhancing drugs.

Flex explained in detail his first experience with steroids:

“(My first cycle was) dianabol. Just dianabol, just the capsules. I put on thirty pounds in a little bit over a month. I wasn’t telling anybody and I was kind of secretive about it, only a few people knew in the gym. But I just couldn’t hide it,” Wheeler said.

“I put on like thirty pounds, and I was like ‘Is this safe?’ I remember asking one of the old timers, and he goes ‘Don’t stop son. Don’t stop, keep going,’ and I’m like ‘Yeah, but look what’s happening.’

“(I had) stretch marks everywhere. They were so painful, they were like big worms… You can still see them on my forearm, in between my legs. They were huge and red, it was horrible.”

While he continued to increase the amount of steroids used to prepare for bodybuilding competitions, Flex started to have problems with his kidneys. Till today doctors did not say it was related to the use of steroids.

Flex Wheeler started to make a name for himself as the best bodybuilder in the world, but this all started to change when he placed second at the 1999 Mr. Olympia.

As doctors still could not give an explanation to Flex why his kidneys are failing, he said he noticed things getting worse when after every competition. Flex would gain 30-40lb, with extreme swelling in his hands and feet, and even his genitals.

“In ’99 it really, really got bad. I took off from LA and I drove to San Jose, and when I got there I was so swollen I couldn’t even move. I checked myself into a hospital and I did an epson salt bath, and I ended up having to take a diuretic to flush the water out, and I’m like this ain’t right,” Wheeler said.

“For over a year I went to all kinds of specialists. All they said was ‘Oh you eat too much protein. Oh it’s the sports technology drugs you take. Oh you’re too heavy,’ just a whole bunch of misfits. I went to every hospital and every specialist I could go to, and they wouldn’t even do blood work.”

Wheeler continued to explain that the doctors took decisions based on his physique, which led to them not doing the proper testing and diagnosis.

In 2000, the doctors finally did a biopsy and discovered that he had FSG (focal segmental glomerulosclerosis), one of the deadliest kidney diseases.

After this, Flex tried to keep competing in spite of the massive amounts of medication that he was being forced to take. However, at this point, started to compete drug free.

From Kidney Failure to Amputation

Flex Wheeler started to live a life of extreme pain and discomfort due to complications from kidney failure. Flex came close to death on many occasions.

After numerous procedures, Flex had no choice but to eventually get the lower part of his right leg amputated. In fact, by the time he had to get the procedure done, he almost lost more than that.

“At that time, the doctor just stared at me, and I started crying because I knew. She said ‘Flex we’re there.’ So I said ‘Just take it,'” Wheeler explained.

“So it was from July to November, I think it was November 3rd when they did the surgery.”

After the procedure, Flex Wheeler recalled being in unbearable pain. He was on a large amount of medication in the hospital, but he refused to keep taking them when he got out, for fear of getting addicted.

Nowadays, he says that the pain is still constantly there, even though he has gotten used to it. It is not uncommon for amputees to feel phantom pain in their missing limbs, and this is no different for him.

Flex is not of the woods yet, he was informed by doctors that he is at risk to have his remaining limbs amputated.

“(The doctor said) ‘The disease you have now causes occlusions of your arteries. So you’re at risk now, of losing your left leg,'” Wheeler said, fighting back tears.

Flex Wheeler revealed that that his kidney donor unfortunately passed away in 2020.

Flex Wheeler’s donor explained that his donor, Risa, lost her father when she was very young.

As Flex’s children were still very young, Risa did not want them to grow up without a father.

Not long after they did the kidney transplant in 2003, Risa revealed that she was diagnosed with breast cancer.

After a 16 year battle, Risa unfortunately passed away. Flex describes Risa as a “Pure Angel”.

This is probably the most in-depth interview that Flex has ever done.

Flex Wheeler has conquered every obstacle thrown at him during his life and we are sure he will continue to.