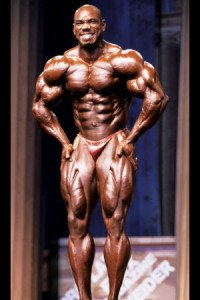 Like Levrone, Flex Wheeler is inducted into the Hall of Fame in his first year of eligibility.  He earns that distinction by sculpting one of the most aesthetic physiques, and one thought by many to be the best never to win a Mr. Olympia title.

In seven tries as the Olympia, he was runner-up three times – in 1993, 1998 and 1999 to Dorian Yates, then Ronnie Coleman, twice.  Many still argue that Flex should have won the title atleast once.

His placings in the Mr. O yielded an average of fourth.  His overall pro record shows he placed top five in 29 of his 33 events. 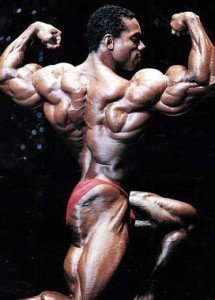 Flex Wheeler was born August 23, 1965, in Fresno, California, and took up weight training as a teenager.  After some early AAU contests, including a medium-tall class victory at the 1985 Teen Mr. America and a heavyweight win at the 1985 Governor’s Cup, he switched to the NPC.  He snagged fifth place among the light-heavies at the 1989 Nationals, and a second place among the heavyweights two years later at the same contest.

In 1992, he won the heavyweight and overall at the NPC USA and earned a pro card, which he cashed in for four consecutive pro wins right out of the gate in 1993 – a feat matched only by Mike Francois the following year.  Wheeler won the Ironman, the Arnold Classic, and the French and German Grand Prix contests within the span of exactly one month. 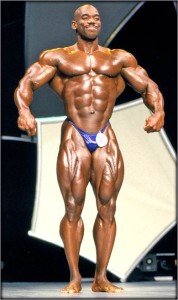 While Wheeler had the reputation of being arrogant and overconfident, he attributed this to a need to compensate for his introversion and insecurity as a child and young man. In 1994, he was involved in a near-fatal car accident that could have left him with lifelong paralysis. Falling back into depression again, he started training from scratch, returning with remarkable speed to bodybuilding’s top tier. In 1999, Wheeler discovered that he had Focal segmental glomerulosclerosis, a form of kidney disease. Despite press speculation as to the cause of the failure, Wheeler pointed out that the condition is hereditary. Wheeler announced his retirement from competitive bodybuilding in 2000, but continued to compete until 2002. He received a kidney transplant in 2003.

Wheeler once revealed that both the highlight and lowlight of his career occurred in 1996 when he won the Night of Champions and lost the Arnold Classic to Kevin Levrone.  A highlight of his personal life occurred a year later; since June 28, 1997, he has been married to Madeline Ann Love. 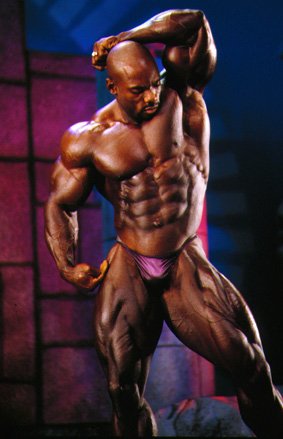